Why domestic violence will rule for as long as pornography exists

Posted by Sarah Handreck 8sc on

Over the past few years we have been shocked by the dramatic rise in domestic violence. We have seen a State Government taskforce established and generous funding pledged from the Federal Government in order to put an end to domestic and family violence. Despite this the problem grows and the pornography industry thrives. Once only freely available in the online space, pornography has now has successfully transitioned into the mainstream. Just look at the Fifty Shades Franchise.

In 2013 Amazon revealed Fifty Shades of Grey was its biggest selling novel of all time. In 2015, the movie made a cool $571 million, and now it’s 2017 sequel Fifty Shades Darker is breaking records for the biggest R rating movie across the world. The popularity of pornography, in particular Fifty Shades of Grey sends a very sober message as to why we are losing the fight to end men’s violence against women. With overwhelming popular support, marketed as ‘romantic, sexy and empowering’ these movies depict relationships in which emotional and sexual abuse are pervasive[i].

In February 2015, Collective Shout hosted the first-ever Australian symposium on the harmfulness of pornography to young people. Pornography was identified as being a public health crisis requiring urgent intervention.

In March of 2015 the Senate Environment and Communications Reference Committee held an inquiry into harm being done to Australian children through access to pornography. In a submission written by Collective Shout in March (2016) the devastating effects of pornography were all to clear to see.

As a teacher I’m aware of the negative effect pornography has on our students. According to the Australian Bureau of Statistics, there has been a rising number of sexual acts between students and an increase in reports of sexual harassment and assault (offences by school-aged children have quadrupled in only four years). Plan Australia commissioned a survey of a random sample of Australian women between 15 – 19 years of age. The findings regarding the impact of pornography were chilling with 58% agreeing girls often received uninvited or unwanted indecent or sexually explicit material and 51% admitting girls are often pressured to take ‘sexy’ pictures of themselves and share them and 81% believing this to be unacceptable.[iii] 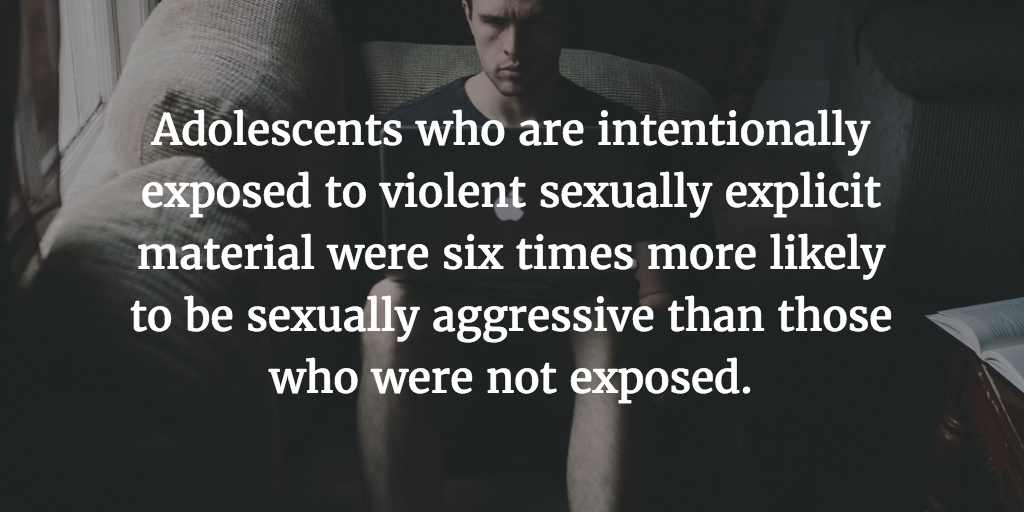 International studies also found that boys exposed to pornography are more likely to engage in sexual harassment with a 2011 US study finding that “adolescents who are intentionally exposed to violent sexually explicit material were six times more likely to be sexually aggressive than those who were not exposed.”[iv] Another study also found exposure to pornography is “associated with greater acceptance of stereotyped and sexist notions about gender and sexual roles, including notions of women as sexual objects.”[v]

Dr Michael Flood, (A professor from University of Wollongong) established a strong link between pornography and sexual violence. In his 2009 report he commented that “consistent and reliable evidence that exposure to pornography is related to male sexual aggression against women.”[vi] Perhaps the most chilling though is where Dr Flood noted “in a study of Canadian teenagers with an average age of 14, there was a correlation between boys’ frequent consumption of pornography and their agreement with the idea that it is acceptable to hold a girl down and for her to have sex.”[vii]

The weight of the evidence presented is stunning. It is the inaction that is even more confronting. To think that, despite this evidence, no real action has been taken to address this issue. As stated by Collective Shout, “To fail to take action would be to betray a whole generation… by ceding their formation in sex and relationships to the hands of a pornography industry and cultures that teaches boys and young men to view women as sex objects, to be used in a degrading and even violent way, that teaches girls and young women to view their worth as conditioned upon their valuation by porn-saturated boys and men as fit for the purpose of an objectified sex instrument”[viii]

I’m not professing to be an expert on this issue. I have no background in or experience in sex work or the pornography industry, I’m not a professor or academic or doctor… But I am a teacher and more importantly a mother, and I want more for my son. Pornography overwhelmingly centre’s on acts of violence and degradation toward women.[ix] How then can we expect to end domestic violence, to expect love and respect, when pornography demands the opposite?

Prime Minister Turnbull has been quoted as saying “It is ‘unAustralian’ to disrespect women”. It is therefore ‘unAustralian’ to tolerate pornography. Pornography is rotting the brains of our children. It is etching and cultivating the behaviours and ideas behind domestic violence. It promotes and normalises acts where men are violent towards submissive women. It encourages relationships in which women are only seen and used for their bodies, instead of being loved and cherished for their minds and souls.

When movies like Fifty Shades promotes a man’s violent and controlling behaviour as exciting, romantic and affectionate…. Is it any wonder why domestic violence is at an all time high? Pornography is not an adult privilege. It is not victimless. It is the disease and driving force behind the degradation of women and domestic violence. As long as pornography exists women will be objectified. Gender inequality will rule. Men will continue to be enslaved and women will not stop suffering.

Twenty years ago no one had an understanding of the damage asbestos would do to our lungs. In the same way we are only just beginning to understand the damage pornography is doing to our minds. To quote one of my colleagues: “Pornography is the asbestos of this generation, it is the silent killer.” For the sake of the next generation, their health, their relationships and their future, a significant shift needs to occur.

Movies like the Fifty Shades franchise have not only normalised domestic violence, but have been successful in rebranding the behaviour as sexy, empowering, exciting and fun. How can we then realistically expect to see any different in our own relationships and attitudes? It should be no surprise the increased rate of domestic violence has taken place alongside this rise in popularity and mainstream acceptance of pornography. We need to be realistic, if we continue to support pornography through media that rebrands violent and controlling behaviour as sexy and fun, we won’t make any progress in the fight against domestic violence. It’s quite simple, for domestic violence to come to an end, so too must our acceptance and love of pornography.

Sarah Handreck works full time as a high school teacher, specialising in Legal Studies. She is passionate about student welfare and empowering her students to make a difference in the community.

[viii] Collective Shout (7 March 2015) ‘Harm being done to Australian children through access to pornography on the Internet Submission to the Senate Environment and Communications References Committee, 2015’. June 2016 Access online at https://d3n8a8pro7vhmx.cloudfront.net/collectiveshout/pages/1019/attachments/original/1457408234/CS_Submission_Harms_of_Pornography_Inquiry_March_2016.pdf?1457408234