The decision by Ultra Tune to hire rapist and woman basher Mike Tyson to flog its products, Channel 7 to air the advertisement and Tennis Australia to allow the 30-second promotion’s broadcast during the Australian Open is as dangerous as it is ethically and morally repugnant.

Mike Tyson’s appalling history with women has been well documented, so it’s highly unlikely the people behind these organisations are not aware of the former heavyweight boxing champion’s bloody past.

He was convicted of raping teenager Desiree Washington in 1991, spending three years behind bars for this crime.

Tyson also subjected his former wife Robin Givens to extreme brutality during their marriage, even having the gall to boast about bashing her in his biography.

“It was when I fought Robin in Steve Lott’s apartment. She really offended me and I went BAM. She flew backwards, hitting every wall in the apartment. That was the best punch I’ve ever thrown in my entire life,” Tyson says in Fire and Fear: The Inside Story of Mike Tyson.

Tyson has also told media outlets about beating up female sex workers he had hired.

Yet, despite all this, Ultra Tune and its CEO Sean Buckley decided the 52-year-old thug was the perfect person to front an advertisement that is being broadcast into millions of lounge rooms during one of Australia’s greatest sporting events. 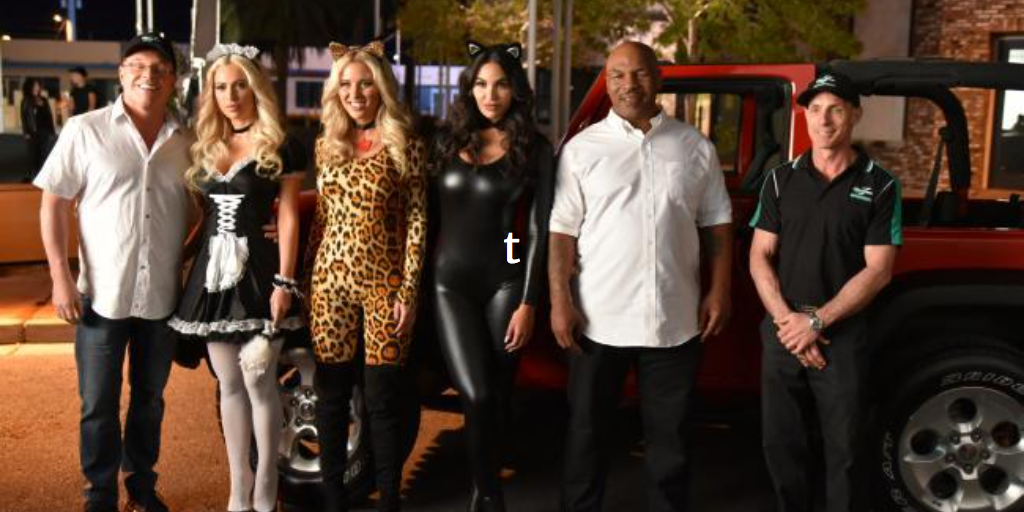 To add insult to injury, Channel Seven profits from this normalisation of violence by running the advert during the Australian Open broadcast and Tennis Australia stands idly by, failing to call out its major broadcast partner for broadcasting a rapist into our homes.

In his latest appearance in front of the cameras, Tyson comes to the rescue of three scantily-clad bimbos who have smashed their car.

The advert presents an abusive man as your everyday nice guy — a funny, kind and generous good Samaritan, willingly embraced by a trio of young impressionable woman.

They seem to be no older than Desiree Washington was when Tyson raped her when she was 18.

The Bureau confirmed on Thursday that it had received about 70 complaints regarding the Tyson promo, but a spokesperson said a decision about whether or not it breached Australian standards was at least two weeks away.

Each year, Mr Buckley denies his Unexpected Situation series of ads — including the new one — are offensive.

Buckley has spoken publicly about the Tyson advert but he has not addressed the decision to give the boxer a platform despite his violent past.

“We get targeted because we put some attractive girls in a commercial and we’re sexist. Why single us out? Because we’re a male-oriented car servicing company doing something a little bit different,” he told News.com.au earlier this year.

Buckley claimed it was an appropriate decision, even in light of the worldwide #metoo movement that has been shining an extremely and uncomfortably bright light on sexual violence and abuse against women, particularly in the entertainment industry.

“As to ... the #MeToo movement, I don’t see that ad being disempowering to women,” Mr Buckley said.

“I think it’s a storm in a teacup.

Channel Seven refused to address the issue of airing a promotion featuring Tyson, saying instead that it was satisfied the promo did not breach industry guidelines.

“Our viewers can be assured that all commercials are carefully vetted by Commercials Advice before they go to air, and this Ultra Tune ad does meet all the industry codes and standards,” a Seven spokesman said in the company’s one-line response to my questions.

Tennis Australia did not respond to a request for comment.

Placing people like Mike Tyson into significant media roles normalises and legitimises rape and other violence.

This advertisement is being watched by impressionable children and young people and statistics show many these kids will be exposed to violence from an early age.

The Australian Bureau of Statistics and other reputable research organisations have consistently shown that regardless of your gender, you are more likely to be harmed or killed by a man than a woman in Australia.

The ABS’s latest Personal Safety Survey shows one in five Aussie women (that’s 18 per cent of the female population aged over 15 or 1.7 million people) and one in 20 men (4.7 per cent or 428,800) have experienced sexual violence.

And non-sexual violence? Well, the figures are just as appalling. The survey shows four in 10 men (41 per cent or 3.7 million) and three in 10 women (31 per cent or 2.9 million) have been assaulted.

Meanwhile, 15 Australians have been murdered this year — that’s five people killed a week since January 1, 2018.

Femicide Australia Project research also shows 10 of the people killed in the past three or so weeks were adult males. Five were adult females.

Domestic violence is a factor in seven of the killings.

Last year more than 170 Australians lost their lives to violence — with 82 per cent of those charged being male.

These figures are the reason it is so gobsmackingly incredible that no one at Ultra Tune, Channel Seven or Tennis Australia has put a halt to the broadcast of this advertisement.

The reality is, we are unlikely to see the end of male violence in Australia during my lifetime or even in the lifetime of today’s kindergarten kids.

But we can take steps now to de-normalise abusive behaviour in the hopes that there will be a time when all little boys grow into nonviolent men.

We don’t give kids money or a pedestal to stand on when they are naughty because we know that rewarding bad behaviour will lead to more bad behaviour.

On the flip side, girls and women are given the impression that their safety is of lesser value to the profile of abusers because violent men are just misunderstood forgivable good guys who deserve to be on TV.

Many Australian businesses are taking a stand against abuse by offering domestic violence leave, providing grants to people fleeing abusive partners, having their staff take part in education programs, embracing national events like White Ribbon Day and sponsoring services at the coalface of the nation’s family abuse epidemic.

It’s a crying shame that Ultra Tune — a brand most of us recognise — has decided to go down the opposite path and that Seven and Tennis Australia are not brave enough to draw a line in the sand when it comes to profiting off men like Tyson.