Collective Shout activist Talitha Stone, 25, recently made headlines across Australia and internationally for leading the campaign against US rapper, Tyler the Creator, whose lyrics glorify violence against women. Talitha asked why the Australian Government had a national plan of action to reduce violence against women while at the same time welcoming artists who promote and endorse that same violence.

Talitha attended Tyler’s Sydney all-ages concert where he proceeded (not knowing she was there) to vilify her before his audience of young fans. She recorded him stirring the crowd into a a frenzy with his tirade, uploading the footage to Youtube. As a result, New Zealand decided to ban him from entering their country. Because of the abuse she received, she persuaded Twitter to add a ‘report abuse’ button. You can read about Talitha’s activism here.

Before this, Talitha exposed the sexist nature of the Lingerie Football League by trying out for the team and writing about her experience.

Talitha’s youth, bravery and harnessing of social media make her an ideal role model for young women and an inspirational ambassador for Collective Shout’s mission to create a world free of sexploitation.

It is our aim to have as many young people in Australia hear Talitha speak about why they should join her in acting personally and politically to resist a culture which, according to current global research, is making them sick.

We are hoping Talitha can represent Collective Shout in Australian secondary schools to encourage young women – and men – to challenge sexism and violence in all its forms.  But we can’t get her there without your help.

We need at least 90 Collective Shout supporters to make a donation of $100 each before 30 June so we can help Talitha reach as many students as we can this year.

From the Collective Shout Team 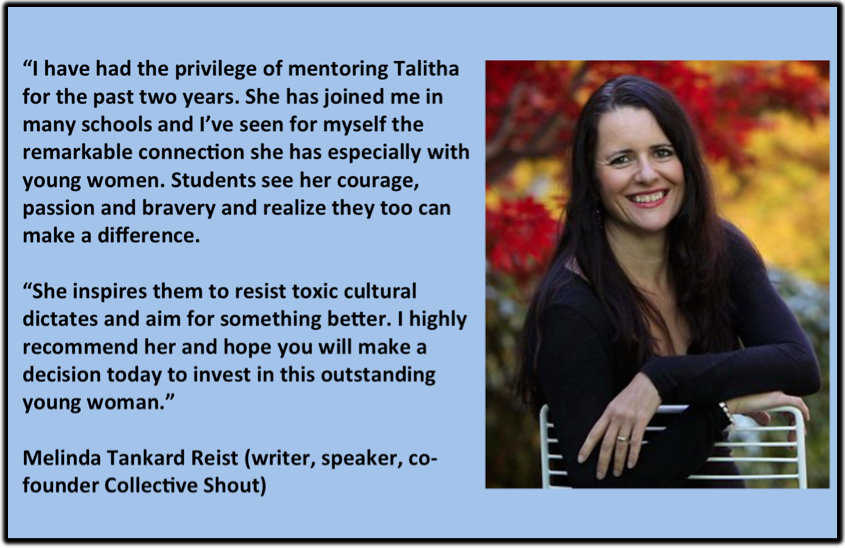 P.S. If you would like to arrange for Talitha to speak at a school you are connected with, we would also love to hear from you!

Please Note: Collective Shout is currently a registered not for profit, and your generous support will help us grow and move towards achieving tax deductible status.
At this stage donations are not tax deductible.