The Outdoor Media Association says it won't be back. But what about all the other billboards?

Brisbane residents Pip and Tanya created an online petition calling on the Ad Standards Board to take down a billboard advertising a strip club right outside a school. We wrote about the campaign and thousands signed the petition. 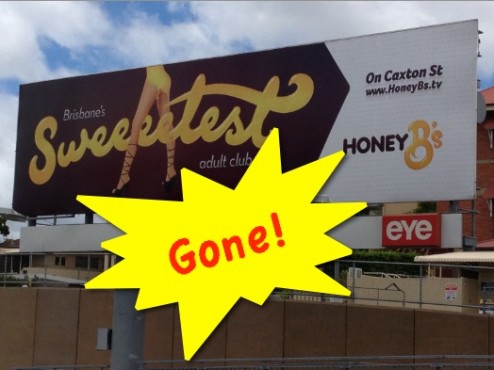 Pip and Tanya have received a response from the Outdoor Media Association (OMA). The OMA is an ad industry body representing out of home media display companies and production facilities, as well as some media display asset owners. The OMA also liaises with the Ad Standards Board about complaints.  Here's what they had to say in part:

While we are aware that this content does not breach the AANA Code of Ethics, we have worked with our member involved with this particular billboard to remove the advertisement in question. They have also taken steps to ensure that this type of content is not posted in this location in the future.  While the OMA does not have a placement policy, with the exception of alcohol advertisements, we do support the community's concerns to have advertisements like this relocated.

This is GREAT news for the school and for the broader community. You did it! Your voice has made a difference.

However, we need your support to take this even further so that this cannot happen near any school, ever again.

This recent action from the OMA effects just one billboard. There are numerous other billboards around the school, all of which have hosted strip club advertisements, visible from within the playground and the classroom. The removal of one billboard does not effect these other billboards and doesn't address the broader issue of inappropriate outdoor advertising near other schools and elsewhere around the country.

For example, a Perth Resident has tried unsuccessfully to have this poster removed from outside a bus stop. There is nothing stopping this sex shop in Adelaide displaying graphic illustrations of violent pornography in its shop front window, less than 500 metres from a nearby primary school.

Petitions now need to be received by 24th May. Post petitions to the above address ASAP.

We will then gather these petitions together to be tabled in Federal Parliament.

Printing? Handwriting? Yes, it is unheard of in 2013! But make no mistake, by doing this you WILL make a difference! You've already caused one billboard company to act, lets make sure they are ALL compelled to act.

We have been asked via comments (see below) about the recommendations referred to in the petition. The petition says:

We therefore ask the House to urge the Attorney-General to act on the recommendations of both the Inquiry into the Regulation of billboard and outdoor advertising by the House of Representatives Standing Committee on Social Policy and Legal Affairs and the report by the Australian Law Reform Commission into Content Regulation and Convergent Media (ALRC Report 118), with respect to restrictions on adult content;and in consideration of the interests of concerned citizens and the welfare of students.

A Federal government inquiry into the regulation of billboard and outdoor advertising included in its recommendations:

occupy public space and have the potential to affect the amenity of that space for some community members;
can be viewed by an unrestricted audience, regardless of their target audience;
and have a cumulative impact on the community through the social messages they convey.

…that the Australian Association of National Advertisers amend its Advertising Code of Ethics to proscribe sexual objectification of men, women and children.