We have written about Witchery Kids advertising before. Witchery has ignored child development professionals concerns and persists with treating children as 'miniature adults.'

Today in the Herald Sun 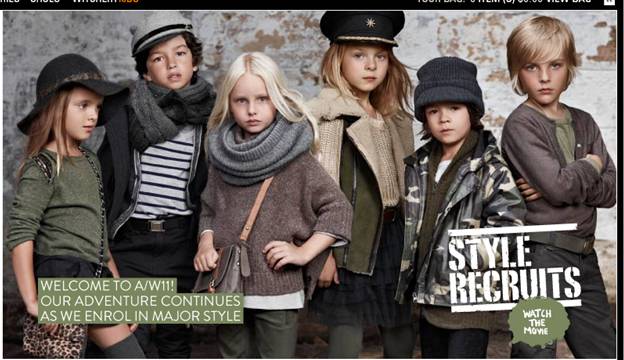 A POPULAR clothing chain is facing a people's revolt over its persistent use of sulky, "adultified" images of children in advertising.

WitcheryKids has sparked outrage for the second time in five months, after rolling out another campaign featuring brooding children posed and styled like adults.

In its latest Style Recruits campaign, unsmiling children aged 5-8 are pictured against a drab streetscape, decked out in combat-style garb, knee-high socks and short skirts, and leopard print.

A similar photo shoot by the chain last year attracted controversy across the globe, with a former Play School presenter calling it offensive and dangerous.

The company says it wants to portray "confidence" and individuality. The children were not forced into poses and parents or guardians were present during the shoot.

But child psychologist Michael Carr-Gregg is calling for parents to boycott and picket the stores.

"They have been previously warned about this adultification, so now the gloves are coming off," Dr Carr-Gregg said.

"This is an attempt by Witchery to cement in our culture that children can be miniature adults and fashion accessories."

He said it could contribute to "appearance anxiety" plaguing people's childhood and adolescence.

Kids Free 2B Kids director Julie Gale backed his call, and has complained to the company.

"I am astonished that your company did not heed the concerns expressed by child development professionals about the way children were depicted in your last catalogue," Ms Gale's letter reads.

"Children do not develop healthy self-esteem if they are encouraged to focus on how they look or what clothes they are wearing."

A Witchery spokeswoman said, "Witchery does not support the 'adultification' of children and rejects any suggestion that we would intentionally convey children in this light".

Two complaints to the Advertising Standards Bureau, based on concerns the last campaign was "sexualising" children, were dismissed.

Contact Witchery here and tell them what you think of their latest advertising campaign. Urge them to take notice of the concerns voiced by child development professionals and to make better decisions regarding their advertising. Let them know that you won't be shopping there until they do.