Women blindfolded and gagged: the latest in men's fashion from Roger David

The try-hards at Roger David are promoting two new t-shirts for the boys, featuring women who are gagged, with strips across their eyes and semi-naked, as the latest fashion statement. 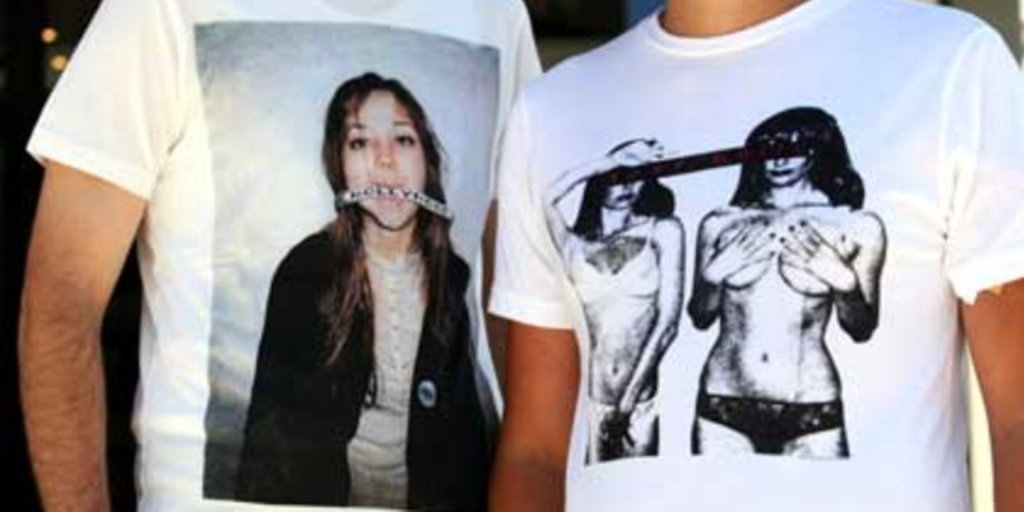 The woman in the ‘Annie Hollywood’ t-shirt  (produced by ‘Blood Is The New Black’) looks as though she has been roughed up. She appears disheveled and exhausted, her image reminiscent of a crime scenes photo. The other two women have a strip across their eyes, suggesting a loss of identity and dehumanisation. Their semi-naked bodies are pimped through a t-shirt.

What we are seeing here is the glamourising of abuse, the suggestion of sexual aggression, a hint that women want to be treated roughly.

The abuse is glamourised not just for the perpetrator, but for the victim too. As though it’s not only hot to be the pimp, but it’s sexy to be dominated, coerced, submissive, abused – possibly even raped.

Roger David really like their domination and abuse tees. They feature as first items on their home page and on their Facebook.

But it’s not just Roger David mainstreaming contempt for women wrapped up in a tee.
A mate came across this at the Birkenhead point Authentic outlet store in Sydney the other day.

What is this? A plug for trafficking? Bring ‘em over, the more exotic and servile the better!

Then there’s others available from online stores , treating rape as a joke and portraying little girls as little sluts.

“It’s not rape if you yell Surprise!”

“Your little princess is my little slut”

A sexual assault survivor told me that for her, the t-shirts are highly triggering of assault memories and she suspects that other survivors will find them so too. So as well as putting women and girls in physical danger, t-shirts like this serve as a form of mental torture too.

Women gagged, women who can’t see, women transported away from their homes to service men elsewhere. We have to ask why the demand for these shirts and why men’s stores are pimping these porn-industry inspired messages about what women are good for.