The "I support Women in Sport" awards hosted by Women's Health Magazine faced social media condemnation for its decision to hire body painted semi-naked models to parade and pose on the red carpet for the event.

We wrote about how the sexual exploitation of women in sport is harmful to women and girls and called on our supporters to speak out against it.

Given that it was Women's Health Magazine that hired the models to attend the event,  this response was not well received.

Board member of the Australian Women's Sport and recreation Association Danielle Warby wrote about this in an article for The Guardian: 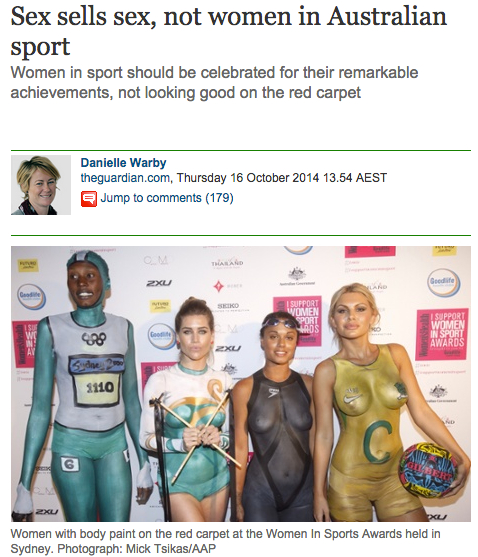 I was quiet when a horse was named as “sportswoman of the year”. I was quiet when someone thought it would be good sport to see women run around in their underwear playing a game that most Australians don’t understand. But this time, I can’t be quiet. This time, someone who was supposed to be on our side has done something really stupid. I feel betrayed.

Four years ago, Women’s Health Magazine started the I Support Women in Sport awards to, in the words of editor Felicity Harley, give “our home-grown female sporting stars… the recognition and support they deserve”.

For this, I applauded Women’s Heath. Women in sport need a champion, particularly one that speaks to a readership of 350,000 a year, which is about 250 times the crowd a W-League game can pull.

But this year, something went horribly wrong. At the awards ceremony four topless models, posing as athletes, paraded around the red carpet for the event with painted uniforms. Read more at The Guardian

We apologise for any offence caused by what was supposed to be an artistic execution on the night of our I Support Women in Sport Awards. It was in no way the intention. We got it wrong and we wholeheartedly apologise.

We have since been contacting the guests who attended the awards to apologise and express our sincere disappointment that this has taken the spotlight away from the phenomenal sporting talents of our female athletes.

Women's Health I Support Women in Sport has always been about celebrating and recognising Australian sportswomen and we hope the focus can now return to the achievements of these incredible athletes.

Support Women and Girls in Sport

Find out more about the Australian Womensport and Recreation Association here - http://www.australianwomensport.com.au/