"You annoying me cause you're talking"..."shut the fk up" - Red Foo

Collective Shout's Jas Swilks started a petition on Change.org calling on the X Factor to cease ties with Red Foo.

Ms Swilks told news.com.au that the petition had only gone online on Tuesday and the aim of the petition was to force Channel 7 to take a stand against sexism and misogyny.

She also said if Redfoo really did respect women he shouldn’t have produce a video clip which appeared to show quite the opposite.

Our petition got a shout out on the Chaser Media Circus: 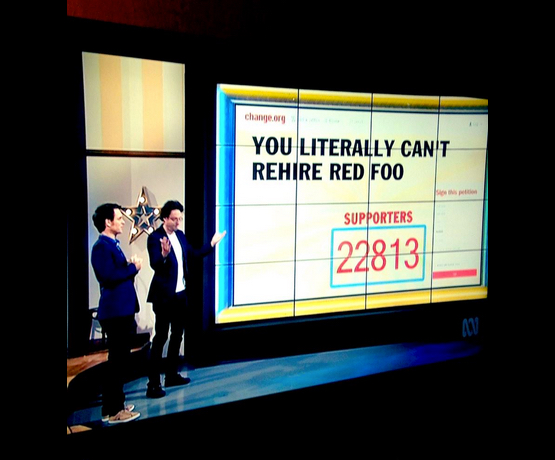 RedFoo has just released his new collaboration with Lil Jon, Play-N-Skillz and Enertia McFly '; named ‘’Literally, I Can't.'' In the video, a group of sorority girls are harassed and verbally assaulted, simply because they don't want to drink or engage in certain activities such as ''girl on girl''. The young women are depicted as killjoys and 'annoying' for refusing to conform to the wishes of the male party goers.

"You annoying me cause you're talking"

"Shhh, don't talk about it be about it. Work it, twerk it and maybe I'll tweet about it"

"Girl I'm sipping on this drink, trying to see what you got, not hear what you think."

You can watch the video here *trigger warning*

Issues within the music video/song include:

RedFoo is a judge on Australia's talent show, X Factor, a position which requires him to mentor contestants - often, young women. His offensive and misogynistic portrayal of women in his video clips and performances, disqualifies him from such a role.

This is not the first time Foo has been seen promoting bullying, harming and harassing women. In "New Thang’’, he lines up his female dancers before spanking their backsides and reducing them to objects for his pleasure:

So I can watch that back, HD, slo-mo

In the US, the Department of Justice estimate that 1 in 5 female students will be the victim of a sexual assault. ''Literally I Can't'' makes fun and perpetuates this.

Just recently, headlines were made when Columbian students protested against their universities failure to prosecute rapists. Women such as Emma Sulkowicz, who began the campaign, began carrying their mattresses around campus ; an act of support to all of the women abused while attending university.

How can the National Plan of Action to address violence against women succeed if we allow celebrities like Red Foo to be employed in positions of power?

Red Foo must literally not be rehired.