Four months ago, young Melbourne activist and designer Laura Pintur, 23, launched a campaign through Collective Shout calling on Coles and Woolworths supermarket to act consistent with their corporate social responsibility, ethical framework, care for communities and commitment to safety and dump ‘men’s lifestyle Bible’ Zoo Weekly. She highlighted the way the lads’ mag promoted coercion, violence, sexism, misogyny and male entitlement. Laura’s Change.org petition attracted more than 39,000 signatures along with global media, including this video for The Guardian in which she argued the well being of girls should come before profits. 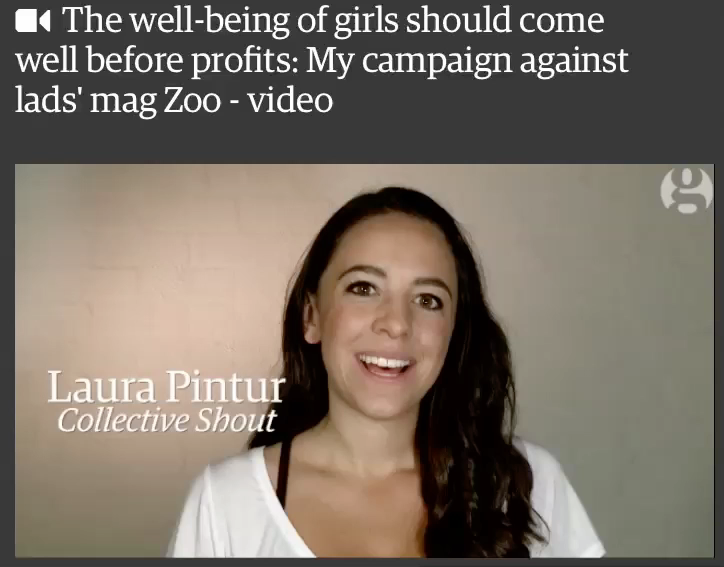 Last month Coles decided to discontinue the magazine, after a young Melbourne employee, Shannen, complained through her union that Coles was putting her and other female employees in a hostile workplace environment.  “Other young women in my workforce will no longer have to put up with selling a magazine that promotes rape culture,” said Shannen after the decision. Woolworths however decided to continue to act in breach of its own ethics, holding firm on selling sexual objectification to boys, including minors.

But now there will be no Zoo magazine to sell anywhere because it is ceasing publication. Mumbrella broke the news yesterday. While the magazine was already in decline, we believe we helped hasten that decline. News.com reports that when Coles bowed to public pressure and pulled the publication, this was “a move that would no doubt be catastrophic for the lad mag’s sales.”

Zoo Weekly has certainly grown accustomed to widespread outrage over the years, having been at the centre of a slew of heated controversies. It had recently been in the firing line of a Change.org petition urging Australia’s major supermarkets to stop selling the magazine, arguing it promoted sexism, sexual violence and used the language of rapists. After attracting close to 40,000 signatures, Coles bowed down to public pressure and pulled the publication in a move that would no doubt be catastrophic for the lad mag’s sales. Read full article

This storify put together by my colleague Melinda Liszewski at Collective Shout demonstrates again why we got behind this campaign (warning graphic content).

Thanks to all who supported the campaign. See also: 'RIP ZOO Weekly - a vile, repugnant and tasteless publication', Tyson Wray, News.com.au