Zoo Weekly: because chopping women in half is 'men's lifestyle'

"More Australian men buy and read ZOO than any other magazine in the country – that’s a fact." - ACP Magazines, Zoo Magazine distributor

28000 - That's the number of boys aged 14-17 estimated to read  Zoo magazine each week.  Despite its pornographic nature Zoo magazine is classified as 'men's lifestyle' and therefore unrestricted - anyone can buy it. Zoo is conveniently positioned and priced for young readers to purchase in convenience stores, service stations and Coles and Woolworths. Zoo boasts that it is the largest selling 'men's magazine' in Australia.

Another way Zoo magazine promotes itself is through Facebook. Zoo's Facebook posts consist mainly of images of semi naked women and women's body parts. Some of the images are from it's 'strip search' promotion. This is where a Zoo representative approaches women on the street and invites them to strip down and be photographed for Zoo. "We hit the streets and somehow convince girls to get their kit off."

Zoo features a full page advertisement for its Facebook page in the magazine - a photo of breasts in a bikini top and the text "Two reasons to like our Facebook page." (image here - caution when opening) The ad promises "heaps more" for those who go ahead and 'like' the page using their smart phone. Zoo regularly posts images of women - or their body parts - on its Facebook page, asking the reader to choose which one they prefer. "Left or Right" is a regular feature on its Facebook page and Website.

"This week, Zoo magazine posted the following image on its Facebook page, asking the question "Left or right, but you've got to tell us how you got to that decision."
The comments came rolling in, here are some (warning - highly offensive comments): 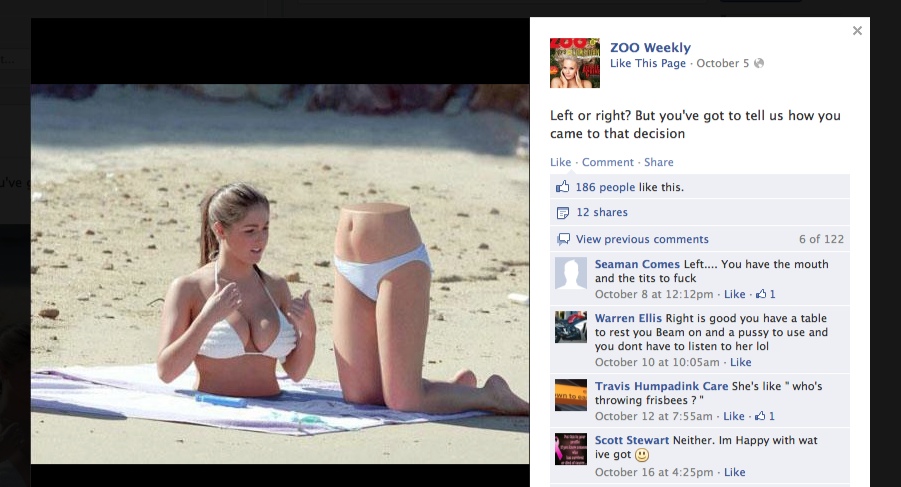 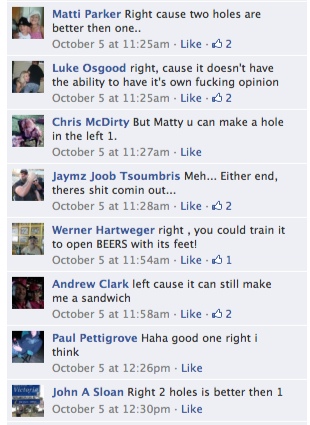 You can't get much more sexually objectifying than to dissect women's bodies and discuss which parts you would like to use or abuse. However, after Zoo magazine's 'hottest asylum seeker' competition, in which refugees were invited to submit photos and explain why they have exchanged 'persecution for sexiness' not much surprises us anymore.

A scan through Zoo's Facebook page shows that along with its 'strip search' promotion, Zoo also uses its Facebook page to solicit semi naked photos from women. Zoo invites Facebook fans to "Send hot pics of you and a Zoo" and provides an email address. These images are then shared with their Facebook fans which Zoo says reaches men from 'teens all the way to their forties.'

Zoo magazine is sold at BP, Spar, Coles, Woolies. In fact it is sold in most major and independent grocery stores. Why do these stores allow themselves to be used to promote such obvious sexism and objectification?  Guy Sigley from The World Tells Me asked both Coles and Woolworths that question. He received responses from both, dodging the question and defending the magazine's placement in stores.

Perhaps it is time for us all to ask Coles and Woolworths that question too.

You can submit your complaint through the online form here: www.adstandards.com.au If you have any questions about submitting a complaint to the Ad Standards Board, contact us here or post a question in the comments below.