How do these people sleep at night? 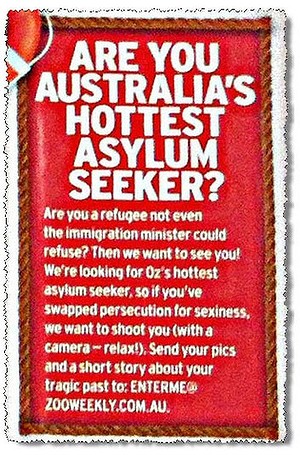 Zoo Weekly has published a two-page spread in its July 16 issue asking asylum seekers to send "pics and a short story about your tragic past".

The text reads: "Are you a refugee not even the immigration minister could refuse? Then we want to see you!

"We're looking for Oz's hottest asylum seeker, so if you've swapped persecution for sexiness, we want to shoot you (with a camera - relax!)."

This competition comes after Zoo had pressured Greens Senator Sarah Hanson-Young to pose for them, saying they would accommodate 'the next boat load' of asylum seekers in their office if she did so. When she refused the offer, they photoshopped her head onto the body of another bikini model.

It seems there is no line that Zoo won't cross in order to exploit women and sell magazines.

A petition has been initiated by Matt Darvas calling on ACP (Zoo's publisher) and Zoo magazine to publish an apology and retraction. As Matt says in the petition:

I live amongst and count as close friends a number of female refugees from several war torn nations in East Africa. Their stories of fleeing their countries include horrible accounts of sexual assault and even rape at the hands of militia and the military. Many of them lost husbands, children and other family members. They still suffer symptoms of post-traumatic stress as a result, which includes frequent nightmares, flashbacks, depression and other associated health problems. To joke as the competition does that - "if you’ve swapped persecution for s-xiness, we want to shoot you (with a camera — relax!)" - is completely insensitive to these women's trauma. However it seems that's exactly what they're after, finishing with, "Send your pics and a short story about your tragic past to [email protected]”

After we shared the news.com.au article on our Facebook, a supporter had this to say:

I dont think I have ever been so incensed by something in my whole life. I have spent 3 years working with refugee women, most of them surviving some form of sexual assault. Some have even witnessed their own little girls raped. Not quite so "entertaining" then is it??

Take a stand against Zoo magazine's contempt for women.

Submit a complaint using the online enquiry form on the Classifications website.

Sign the petition calling for action from ACP and Zoo.

The Hoopla - Seeking Asylum from a Lad's Mag

Melinda Tankard Reist - Don't want to pose for Zoo? Too bad, we'll use your image anyway