Zoo Weekly's ANZAC Furore: What About the War on Women?

Zoo Weekly has suffered a volley of artillery fire over its April "Special Commemorative Issue" marking the 100 year anniversary of the Gallipoli landing.

Model Erin Pash adorns the cover and inside pages, holding a poppy, lying tummy down among poppies and reclining against old army posters on a page decorated with, you guessed it, poppies. All in a bikini (Gallipoli involved a beach, right?). 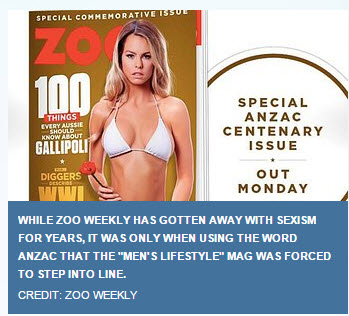 But Zoo is in official trouble, not for sexing up ANZAC day, but for using the word "ANZAC" on its Facebook page announcing today's issue. There are laws against using the name for advertising - and fines of $50,000.

While Zoo has gotten away with sexism for years, it was only when using the word "ANZAC" that the "men's lifestyle" mag stepped into line. Perhaps it was because the Department of Veterans' Affairs demanded Zoo remove all references to ANZAC and the editors didn't want to go to prison or pay a $51,000 fine.

While Zoo made the necessary changes to avoid offence for misusing the term ANZAC, they have failed to make changes on any other front. Where is the outcry over Zoo's raw, unadulterated violence against women, its exploitation and degradation of women - which fuels the ongoing global war against women?

Where are the threats of fines and prison for portraying women as dehumanised sex objects?

Zoo has depicted a woman chopped in half and ask readers - 28,000 of them boys aged 14-17, according to publisher Bauer Media - which half they prefer. The responses are unprintable.

In the "Ask Danny" section, men are encouraged to set fire to their girlfriend's pubic hair if they haven't waxed. Danny advises on treatment of an ex: "Cut her face so that nobody will want her." Readers are also encouraged to take advantage of women who are drunk (which is a crime): "You want to pick the 'loosest/skankiest' one of the lot and fetch her a drink separate her from the flock. You're off alone, boozed-up and charming - these are three green lights!"

Zoo posts "Who do you prefer" pics where it invites Facebook users to rank photos of near naked women. It invites young female Facebook fans to send in sexualised images to be distributed in their magazines or online.

In July 2012, Zoo asked: "Are you Australia's hottest asylum seeker?" Female asylum seekers who had "swapped persecution for sexiness" were encouraged to send in pictures. Zoo joked about "shooting" them with a camera. In Zoo world, even female survivors of human rights violations can be offered up as porny fantasy for readers. Hot refugee women for you to get off on! Brutalised beauties for your viewing pleasure!

Zoo asked Green's Senator Sarah Hanson-Young to pose, promising to house "the next boatload" of asylum seekers in its office if she did. She refused. So her head was photo-shopped onto the body of a lingerie model. Nothing will stand in the way of Zooreader's ejaculatory fantasies - even a female political leader who says no. (Hanson-Young is taking legal action against Zoo).

Zoo's treatment of Australia's first saint, Mary MacKillop, showed no woman was exempt from exploitation. A woman who devoted her life to the poor was celebrated with a model in a habit, and headings like "St Mary Mac and her holy rack" and "Mary's heavenly hooters blessed by Pope." She was presented on her knees "begging for it."

Psychologists from Middlesex University and the University of Surrey found that when given descriptions of women taken from lads' mags, and comments about women made by convicted rapists, most people could not distinguish the source of the quotes.Zoo was included.

Zoo Weekly is sold in service stations, newsagents, corner stores. Woolworths and Coles sell it too, apparently not caring that they are contributing to an intimidating, hostile, degrading, environment for women, including their own staff.

The persistent reduction of women to body parts is a form of discrimination contributing to violence against them. Zoo spreads the idea that male sexuality is based on power and aggression and that women must be brought into line. Displaying lads' mags in everyday spaces like supermarkets reinforces the message that treating women like frivolous sex-objects is normal and acceptable.

Where are the governments and regulatory authorities who will step up and say you can't treat women this way? Zoo Weekly was pulled into line for its demeaning exploitation of the ANZAC commemoration. Now can we do the same for women?