Abused, called pussy and told to “pancake the shit out of her”: my experience trying out for the Lingerie Football League

Last Thursday I found myself walking towards the bright lights of the Sydney’s All Phones Arena at Homebush. Turning the corner, I realised I was in the right place when I saw a line that would have done any night club proud - dozens of attractive young women in full hair and heavy make-up, long tanned legs bared in defiance of the winter chill, eagerly waiting their turn. 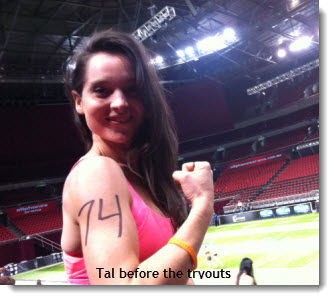 I took my place at the end of the line. Like all the women here on this cold night, I had come to try out for the Lingerie Football League (LFL). Though my motives were a little different. I wanted to see how we would be treated, what would be required of us, and to test the notion that this was real sport.

I was handed an application form, talent release and ‘Waiver of Compensation’ form. The last informed us that the League would not be liable if we were injured. Was that even legal? I saw one of the American players on crutches and wondered how she was paying for her treatment.

The girl in front of me offered me her pen, and helped me figure out the entry process. She told me that she was a surfer, did athletics, and had brought her father along as her support. There were many men in the stands, male friends and some other fathers.

With the paperwork out of the way, we made our way through to the change rooms. The girls in front of me had already started stripping down to their tryout clothes, none as extreme as the lingerie we would be expected to wear if we got through.

We each had a number written on our arms that would become “Your Name” on field - failure to respond to this number meant running a lap of the field, and a repeat of this offense would see us cut from the group, with no chance of selection. A girl ahead of me received number ‘69’, an honour which saw the US LFL team members cheering and joking that this girl had just received a free ticket through to the final selection. Every time number 69 was up, any athleticism or skill she displayed was overlooked in favour of continuing the joke that a numerical reference to oral sex was all the proof she needed of her potential.

We entered the floodlit arena to find it transformed into an astroturfed miniature gridiron field. I nervously made my way down to the field, where a large group of about 80 milled around waiting. Amongst this group were a handful of obviously serious athletes. I later discovered that one LFL hopeful was already a part of a semi-professional women’s football league, and another had represented Australia in baseball. 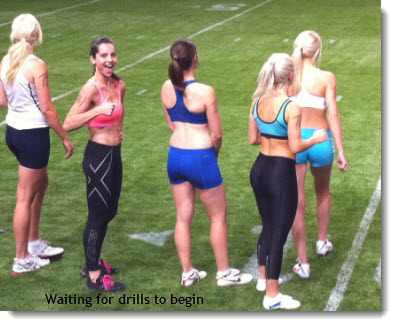 We were put into numerical order for the first drill. Along the sidelines were a number of US LFL players in red tracksuits. They walked around demonstrating drills and pumping the girls up through the night.

LFL founder Mitch Mortaza introduced himself and some of the star players. We then commenced with a warm up before three hours of drills as Mortaza patrolled with a clipboard, looking us up and down, watching our moves.

A cameramen appeared, lying on the ground taking upward angle shots of us running past. I was very thankful to be wearing long tights. I felt less exposed than some of the other women. I wondered how the photos would be used and where.

It wasn’t long before the music pumped up and the LFL players surrounded us, firing us up, urging us to be aggressive to each other. They then went on to insult us, screaming “You’re a pussy!” followed by a hand gesture in the shape of a vagina. As well as acting as an insult, the vagina hand shape was also later held above the heads of the top 20 as a victory sign.

We were shown the drill once and then expected to be able to mimic it. If we failed to do so we were screamed at, called a pussy and then Mortaza would yell “Stop wasting my fucking time, if you are here to fucking sight see, get the fuck out!” The way he spoke to us, made us feel like what we had to offer was never good enough.

Along with being ruthless he also showed a lack of knowledge of the sport.  Mortaza made a fool of himself as he attempted to demonstrate a simple drill, leaving players confused as to what signal he was trying to communicate.

One drill was girl against girl. If we didn’t fight with all we had, we would be pushed to the ground, but that wasn’t good enough for Mortaza. He didn’t just want us to wrestle the girl he wanted us to “pancake the shit out of her”. The girl that ended up getting smashed to the ground was laughed at and along with the hand gesture, was called a pussy by all the LFL players.

During this drill, other LFL players shouted “own her” and “put her in the parking lot” and “haul your arse”. We were expected to physically hurt our opponent. I think this is what disturbed me most. It wasn’t about playing football, it was about how aggressively we could act towards the other girls, how much pain we could inflict, all to entertain the crowd.

For most of the girls this was the first time they had encountered American-style football, playing a sport that isn’t actually Australian. Yet we received incredibly harsh criticism when we failed to match the skills shown by the LFL players who were professional players.

One of the girls I became friends with was behind me and I expressed my concern at the uniform we would be required to wear if we were chosen. She seemed oblivious as to as why this would be a concern. The tall blonde went on to be selected for the top 20, despite lacking the skill, speed and strength of other hopefuls.

After the drills we were then asked to gather around and hear two stories of ‘inspiration’ from two of the most popular LFL players. One story was not give up if you didn’t make it through, the other was to give us insight into what life was like in the LFL. LFL All Star Liz Gorman joked about it being the “fat story” as she had to lose weight when she was picked for the team. (I had already read that players who gained weight were humiliated). ”It is it about image,” she said. She also made a comment about the uniform,“The uniform it is was it is”. We were also warned about the amount of criticism we would receive from being a LFL player and that people would be harsh about our appearance so we had to look after our bodies.

Mortaza then read out the numbers of the girls who were chosen for the final round. Despite my ability to perform the drills, it was clear Mortaza wanted a certain ‘look’. So I was not particularly surprised that a number of us who had displayed greater football skills remained on the sidelines.

While a couple of the girls who made the cut were obviously talented athletes, in the end it was clear to everyone that our ability to play gridiron was a far lower priority than how our body would fill out the uniform.

The night ended with a pep talk about how to look sexy on Saturday night when those selected for a Sydney team to play competitively in December 2013 would be presented during half time at tonight’s LFL game in Sydney. They had to make sure hair and make-up was done and they were showing themselves as sexy, hot girls who had had a lot to offer - on or off the field.

A number of us worked hard and I’m still recovering. We faced constant belittlement and abuse. But our form wasn’t important if we weren’t stereotypically hot.

I’d love to be able to play gridiron someday. I love to test my body and mind to the limits of endurance. But I want to play a game where we are respected and valued for our abilities on the field. I want to know that our clubs would take care of us in terms of salary and insurance. I don’t want to play some pseudo sport where we are expected to wear sexy underwear and engage in girl-on-girl violence, and be called pussies, because that’s what we have been reduced to in a strip show style spectacle for the gratification of men, under the guise of sport.

Tal Stone is a 23 year-old Sydney university student and athlete.

'When women are sport: lingerie football comes to Australia', MTR

‘Lingerie Football League: what it’s really about and do we want it in Australia?’  xyonline