Don't be that guy Brian McFadden

A number of Collective Shout supporters have contacted us about Brian McFadden’s new song ‘Drunk at the bar.’ News.com.au reported that many fans of McFaddens music have slammed the song as promoting date rape.

Lyrics from 'Drunk at the bar' include:

I like you just the way you are, drunk as s**t dancing at the bar

Jump in the backseat of my car...I can’t wait to get you home so I can take advantage

McFadden is apparently shocked 'at these ridiculous accusations’ that he would be promoting date rape.

What is ridiculous is writing a song about 'taking advantage of' and ‘doing damage’ to an intoxicated woman and expecting no reaction. 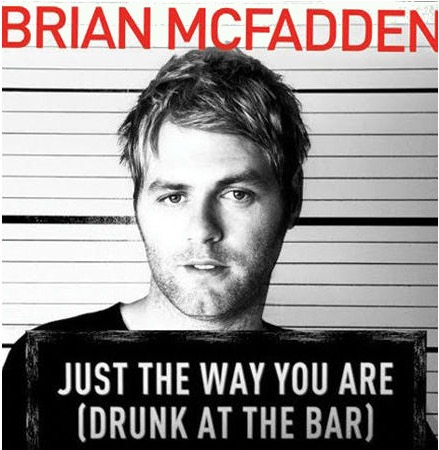 Collective Shout co-founder Melinda Tankard Reist has written about this for ABC's Unleashed today. She quotes anti-sexual assault campaigner Nina Funnell who says of the song:

The law is very clear on what constitutes sexual assault. Again from Melinda's article:

In NSW the consent laws now state that a person cannot give consent if they are intoxicated to the point that they lose the capacity to do so, such as if they are passed out. To ‘take advantage’ of someone in such a state would unquestionably constitute sexual assault".“Having sex with a woman who does not have the capacity to consent is not called ‘taking advantage’.  It’s called rape. Calling it ‘taking advantage’ reclassifies an action from being a serious crime to a negative but essentially trivial behaviour with no legal dimension whatsoever.

'Don't be that guy' campaign targets perpetrators of sexual assault 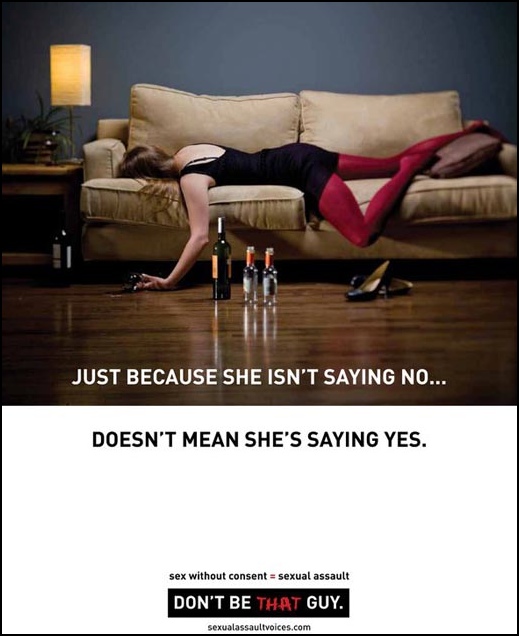 The Don’t be that guy campaign was launched in Canada last year by members of anti-sexual assault group SAVE.

'Don’t be that guy' puts responsibility for stopping rape where it belongs, with the perpetrator.

This is an important initiative in light of a recent UK study which found that 48% of males aged 18-25 did not consider rape to have occurred if the woman was too drunk to know what was happening.

“In each of these cases, the victims were clearly intoxicated ... in some cases passed out at the time of the sexual assault. In each and every case, the offender was known to the victim,” Campbell said.

“A person that is drunk or passed out cannot give consent.”
A study out of the United Kingdom this month involving men ages 18 to 25 showed that 48 per cent did not consider it rape if the woman was too drunk to know what was happening, Campbell said.

If we are to see a safer environment for women and girls, the broader culture must stop undermining the efforts of anti-sexual assault campaigners.

Each time we challenge instances of sexploitation in the culture we are inevitably told to 'get over it, it's just a song/t-shirt/advertisement/product/video game etc.' But it is not 'just' any of these.  It is the cumulative effect of all of these in popular culture that lead to a dangerous environment for women.

Alison Grundy, clinical psychologist in the field of sexual violence for over 20 years quoted in Melinda's article says it best:

“Now we have 30 years of research to show that the sexualised and violent messages of popular music, media and video games do shape and provoke male aggressive and sexualised violence. I wonder how long it will be before songs like this are seen as inciting crimes under the criminal code?

“Not soon enough for those of us who work with victims on the long road to recovery after experiencing the ‘do some damage and take advantage’ behaviour lauded in this song."

It is encouraging to see that McFadden’s song has caused such a strong negative reaction from the community, including his fans. It would be wise for him to listen and think about what he is really saying with 'Drunk at the bar' and how this message threatens the safety of women and girls.