Girls still getting wrong messages about their bodies

It's time for a Love Your Mind campaign 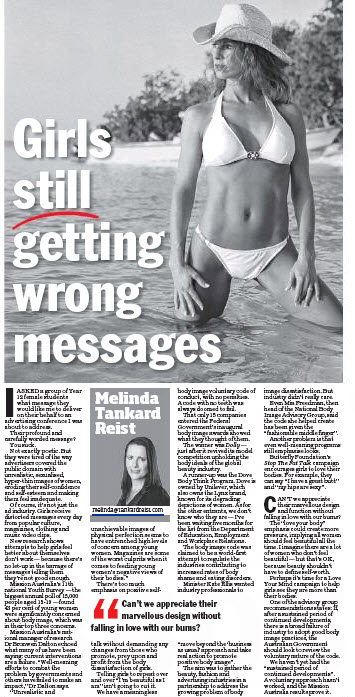 I ASKED a group of Year 12 female students what message they would like me to deliver on their behalf to an advertising conference I was about to address.

Their profound and carefully worded message?

Not exactly poetic. But they were tired of the way advertisers covered the public domain with unrealistic, sexualised, hyper-thin images of women, eroding their self-confidence and self-esteem and making them feel inadequate.

Of course, it's not just the ad industry. Girls receive distorted messages every day from popular culture, magazines, clothing and music video clips.

New research shows attempts to help girls feel better about themselves don't work - because there's no let-up in the barrage of messages telling them they're not good enough.

Mission Australia's 11th national Youth Survey - the biggest annual poll of 15,000 people aged 15-19 - found 43 per cent of young women were significantly concerned about body image, which was in their top three concerns.

Mission Australia's national manager of research Dr Bronwen Dalton echoed what many of us have been saying: current interventions are a failure. "Well-meaning efforts to combat the problem by governments and others have failed to make an impact," Dr Dalton says.

"Unrealistic and unachievable images of physical perfection seems to have entrenched high levels of concern among young women. Magazines are some of the worst culprits when it comes to feeding young women's negative views of their bodies."

There's too much emphasis on positive self-talk without demanding any changes from those who promote, prey upon and profit from the body dissatisfaction of girls.

Telling girls to repeat over and over "I'm beautiful as I am" isn't going to cut it.

We have a meaningless body image voluntary code of conduct, with no penalties.

A code with no teeth was always doomed to fail.

That only 15 companies entered the Federal Government's inaugural body image awards showed what they thought of them.

The winner was Dolly - just after it revived its model competition upholding the body ideals of the global beauty industry.

A runner-up was the Dove Body Think Program. Dove is owned by Unilever, which also owns the Lynx brand, known for its degrading depictions of women. As for the other entrants, we don't know who they are - I've been waiting five months for the list from the Department of Education, Employment and Workplace Relations.

The body image code was claimed to be a world-first attempt to regulate the industries contributing to increased rates of body shame and eating disorders.

The aim was to gather the beauty, fashion and advertising industries in a partnership to address the growing problem of body image dissatisfaction. But industry didn't really care.

Even Mia Freedman, then head of the National Body Image Advisory Group, said the code she helped create has been given the "fashionable middle finger".

Another problem is that even well-meaning programs still emphasise looks.

Butterfly Foundation's Stop The Fat Talk campaign encourages girls to love their bodies. For example, they can say "I have a great butt" and "my hips are sexy".

CAN'T we appreciate their marvellous design and function without falling in love with our bums?

The "love your body" emphasis could create more pressure, implying all women should feel beautiful all the time. I imagine there are a lot of women who don't feel beautiful - but that's OK, because beauty shouldn't have to define self-worth.

Perhaps it's time for a Love Your Mind campaign to help girls see they are more than their bodies.

One of the advisory group recommendations states: If, after a sustained period of continued developments, there is a broad failure of industry to adopt good body image practices, the Australian Government should look to review the voluntary nature of the code.

We haven't yet had the "sustained period of continued developments".

A voluntary approach hasn't worked, and the Mission Australia results prove it.