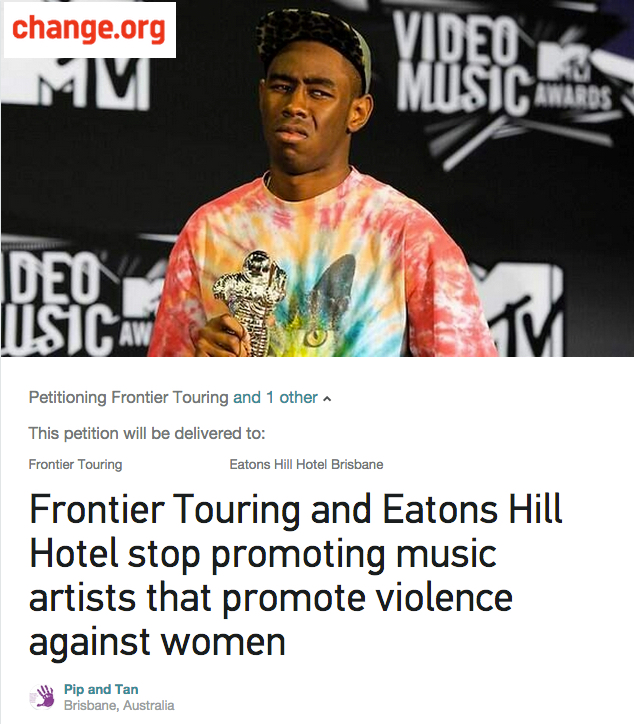 This week American rapper ‘Tyler, The Creator’ will be coming to Australia. This is a man who glorifies rape, genital mutilation of women, and violence in his songs, including for example, raping women and sending them home to their families pregnant. Some of his lyrics below include:

"I tell her it's my house, give her a tour/In my basement, and keep that bitch locked up in the storage/Rape her and record it, then edit it with more shit” ; “I'm not a rapper nor a rapist nor a racist/I fuck bitches with no permission and tend to hate shit/And brag about the actions in a rhyming pattern matter/Then proceed to sat her down when I go splatter in her chatterbox” - Tyler the Creator.

Venues that support this performer's tour can be regarded as being complicit with his messages about violence against women. What is even more disappointing is that Eatons Hill Hotel in Brisbane, the Capitol in Perth and Enmore Theatre in Sydney are promoting this event as being 'Open to all Ages'.

Only last week, a pregnant woman who was walking to work was raped and murdered:
"Please, please don't forget my wife, my child and please, don't let this happen again,"
- husband of murdered Logan woman.

Yesterday, another woman was sexually assaulted near Carseldine train station.

We demand that you cancel this event. Our community is outraged by your decision to host ‘Tyler, The Creator’ and demand that you withdraw support for his show. View petition on change.org here

Tanya and Pip’s petition had received a staggering 26, 000 signatures when they delivered it in person to Brisbane venue the Eatons Hill Hotel. Despite what had happened at the Sydney all ages show management refused to cancel, choosing profits over the safety of women and girls in Brisbane.