From Kenneth Thor on Change.org:

"Thanks to your support, we've gone past 13,000 signatures! It's always good to know there are decent people who hold out for a better world free from the likes of Honey Birdette's rubbish porn-style advertising. 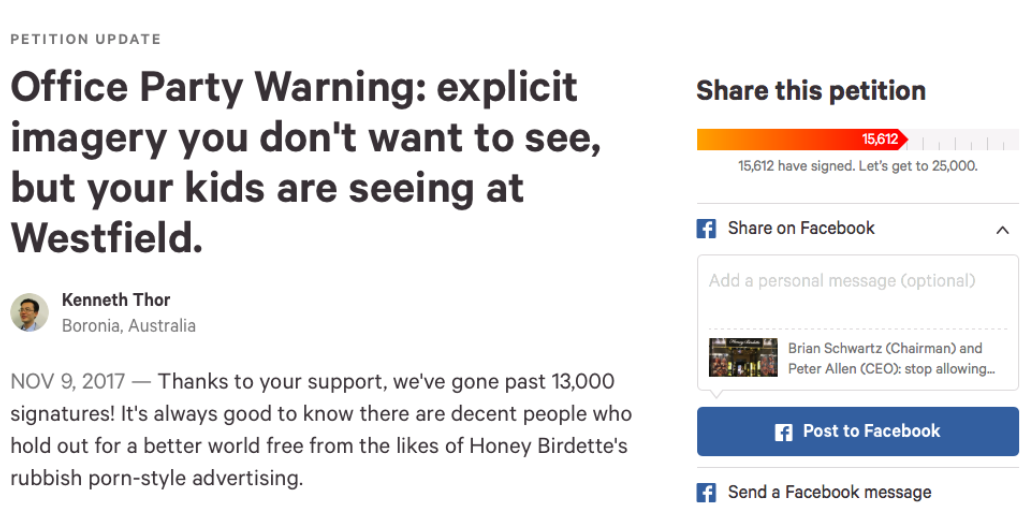 As you have probably read 'news.com.au' today picking up on this petition, the belligerent comments by Elouise Monaghan as she regurgitated her favourite lines about showing more skin at the beach etc. As if repeating something enough times makes it a good argument, but she fails to see that swim suits are actually appropriate at the beach! Hyper-sexualised lingerie at the shopping centre are not! Some people just need a reality check, which she's had with the ASB ruling 3 times in the past 3 months to take down her ads. But the ads are taken down only to be replaced with worse ones!

The latest is the so called "Office Party" where almost naked models saddle each other and strut out stripper-like performances in front of fully suited men at an office function. Are they really only selling lingerie? Watch their corporate video if you must and see photos in the link below. Pictures of all the models are currently on full postered display at your local Westfield.

Then there were the comments in the Sydney Morning Herald article from the Scentre Group which manages all Westfield malls in Australia, saying that they work closely with Honey Birdette on a "number of process on a case by case basis". So, was someone asleep at the wheel to let through 3 ads in 3 months then? How does 3 ads in quick succession get banned if they work so closely with honey Birdette? Are there no nation wide standards? Are populations in certain parts of Australia more fair game to offensive advertising than others? Surely some pertinent questions need to be asked if thousands are petitioning for change and Westfield failed to pick up any breaches before the ASB did.

This Daddy has only just started. Thank you to all the Mummies and Women out there who have supported this cause so far. I'm making a HUGE call out to all the other Daddies and Men out there who love their women in their lives and their precious kids so much that they think they deserve better than this!"