Although his performances went ahead we remain heartened by the volume of support we received and are excited about the impact of this campaign. Together we have made a huge statement that Tyler's incitement to violence will not be tolerated in Australia. The fight continues overseas with international media coverage giving rise to new campaigns, sending the message "we will not tolerate this here either."

We are disappointed promoters and politicians didn’t act with the integrity that the public expected. But do not underestimate the impact of your voice in this campaign. You have not only spoken to the Immigration Minister, to venues, Tyler the Creator, you have spoken to survivors of violence as well (which include our activists and supporters.) We have received messages from survivors about how this campaign has helped to "restore hope" and they now know they are not alone. With 1 in 5 women affected by violence, do not underestimate the significance of this.

So much has happened with this campaign. Here's a recap of how it all unfolded:

Following an alert on Facebook about Tyler the Creator's visit to Australia from CS supporter Jas, thousands responded to our urgent call to action.  Together we began calling on the Immigration Minister to revoke Tyler the Creator's visa and for venues to cancel his events due to the misogynistic and vilifying content of his music.

People began receiving responses from venues. In an email clearly not intended to be seen by the recipient,  The Palace Theatre complained that emails were "cut and pasted" and described complaints about Tyler's misogynistic act as "funny."

One of our young activists Talitha Stone participated in our campaign through social media. When she sent a tweet to a venue asking them to refuse to host Tyler, Tyler the Creator shared this tweet with his 1.7 million online followers. This prompted an onslaught of abuse and rape threats from Tyler fans, directed at Talitha and other Collective Shout activists.

Talitha courageously refused to be silenced, attending the Sydney all ages concert to gather evidence of Tyler’s breach of his visa conditions. Unaware that Talitha was in the crowd recording footage of the show, Tyler launched a tirade of vicious abuse against her. He dedicated a song to her which included lyrics about inflicting violence on women who speak out. Collective Shout uploaded this footage to YouTube. Later it was reported that police were also investigating the sexual assault of a young concert goer.

Tanya and Pip’s petition had received a staggering 26, 000 signatures when they delivered it in person to Brisbane venue the Eatons Hill Hotel. Despite what had happened at the Sydney all ages show, management refused to cancel, choosing profits over the safety of women and girls in Brisbane.

Protesters were present on the night of the performance and featured on ABC news. Watch here.

Footage of Tyler’s rant and our campaign against him received international media attention with pieces in The Courier Mail, The Age, news.com.au, New York magazine, LA Times, The Guardian and more.

Talitha Stone, who attended the Sydney event wrote a first hand account of the verbal abuse and harassment she received from Tyler the Creator and his fans for the Guardian Newspaper.  Read: Tyler the Creator shouldn't be allowed to verbally abuse me 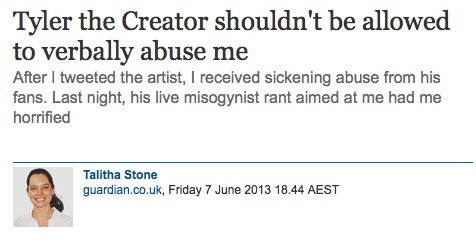 All of this happened because people like you were bold enough to speak out. When we work together, we can make a huge impact. Keep it up!

Collective Shout is a registered Not-for-Profit funded by the generosity of our supporters. Your donation will help fund future campaigns just like this one. All donations big or small, gratefully received.