‘Against her will’: Amazon sells exploitative books glorifying rape and sexualising children

Please Don’t, Against her will, and Passing her around are just a few from the long list of disturbing pornographic fictions Collective Shout, a grassroots movement against the objectification of women, has highlighted as sexually exploitative.

“These books depict victims, including children, as sexually enticing and therefore deserving of rape,” she said.

The backlash comes just a week after Amazon was forced to remove pedophile-themed baby onesies with the slogans “Daddy’s little f**k toy” and “I just look illegal”, Ms Roper said.

“It’s time for Amazon to start exercising basic corporate social responsibility and to wake up to the real-world impacts of the rape books they are profiting from,” she said.

“Amazon’s despicable promotion of rape and child sexual abuse as sexy or somehow warranted undermines global efforts to address an epidemic of men’s sexual violence against women and children.”

Read the full article at news.com.au 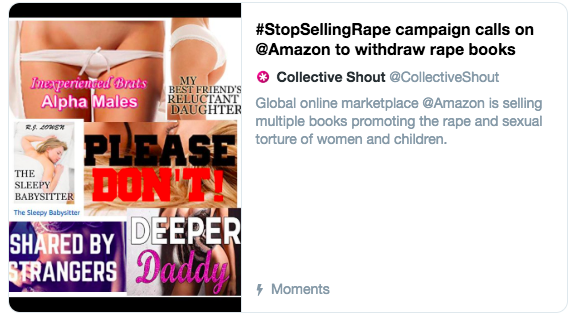