Following community outcry, Aussie Bodies has announced it will withdraw an ad campaign that tied "self esteem" with physical appearance.

In a statement announcing that the ad would be withdrawn, Aussie Bodies said it hadn't understood the "harmfulness" of the campaign, but we're not buying it!

Because Aussie Bodies provided an almost identical response following a 2011 campaign against their "Keep Australia Beautiful" advertisement. These billboards featured an image of a woman in a bikini, zoomed in to focus on her breasts.

At that time they stated they would remove the ads but billboards in Brisbane stayed up for weeks. The next ad campaign featured a close up image of a woman's bottom.

They acknowledged 'the harmfulness' in 2011, but continued to promote diet products by objectifying women and linking self-esteem with physical appearance.

If the company is indeed about 'health and well-being', they wouldn't produce ad campaigns that undermine this supposed goal. We expect better and until we see real change rather than just words from Aussie Bodies, we're not buying it and neither should you.

Lets keep holding these companies accountable! Thanks for speaking out! Together we can make a difference. 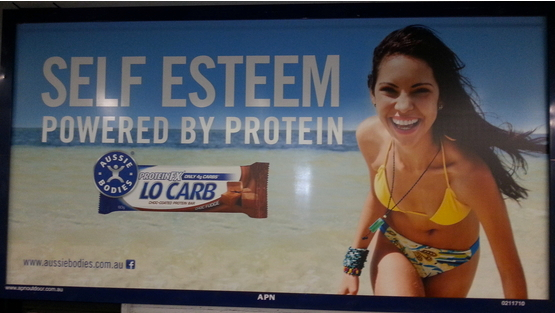 We have just been alerted to a petition on Change.org calling for the removal of diet company "Aussie Bodies" outdoor ad campaign linking women and girls self worth to physical appearance.  Sydney resident Krystin Haywood saw the "Aussie Bodies" billboard at Wynyard Station.

I wholeheartedly object to the linking of self esteem to a trim body. Real self esteem comes from within. It comes from valuing our own gifts and knowing that each of us, not matter how we look , are indeed very important. Everyone is important. Everyone has internal gifts that have the potential to contribute to a better family, society and world.

Research supports what Krystin has to say. The American Psychological Association stated in its report on the sexualisation of girls:

"...thinking about the body and comparing it to sexualized cultural ideals disrupted mental capacity. In the emotional domain, sexualization and objectification undermine confidence in and comfort with one’s own body, leading to a host of negative emotional consequences, such as shame, anxiety, and even self-disgust. The association between self-objectification and anxiety about appearance and feelings of shame has been found in adolescent girls (12–13-year-olds) (Slater & Tiggemann, 2002) as well as in adult women."

"Several studies (on both teenage and adult women) have found associations between exposure to narrow representations of female beauty (e.g., the “thin ideal”) and disordered eating attitudes and symptoms. Research also links exposure to sexualized female ideals with lower self-esteem, negative mood and depressive symptoms among adolescent girls and women."

This is not the first time Aussie Bodies has exploited women and girls body image for profit.

We have previously campaigned against another toxic ad campaign from "Aussie Bodies."  Billboards featured the slogan "Keep Australia Beautiful" alongside an image of a woman in a bikini. The image was focussed on the woman's breasts, leaving her face out of the picture.

We argued that the ad reinforced a narrow standard of beauty and objectified women. The message is that it is a woman’s duty to look a certain way for the benefit of others.

Clearly "Aussie Bodies" has learned nothing and continues to reinforce and exploit women and girls anxiety about their bodies under the guise of "health." We're not buying it and neither should you.

Tell Aussie Bodies what you thin