[UPDATED] Collective Shout supporters have alerted us to this outdoor advertisement for a diet product. The ad urges us to 'Keep Australia Beautiful' by looking like this air brushed, headless model.

This ad reinforces a narrow standard of beauty and objectifies women. The message is that it is a woman's duty to look a certain way for the benefit of others. It may as well say 'Keep Australia Beautiful by looking hot in a bikini.'

Unfortunately complaints to the Advertising Standards Board  against Vitaco have already been dismissed. You can read the PDF determinations here (billboard) and here (transport).

In its response to the ASB, the advertiser denied the ad was sexual in nature and claimed it was about promoting health:

In making its determination, the ASB

… noted that the model is clearly clothed in a bikini and the image used is viewed in connection with the text, making a clear association between the image of the woman and the product being advertised ie: a food product designed to assist with weight management and good health.

But the advertisement does not say 'Keep Australia Healthy.' It says 'Keep Australia Beautiful.' There is a difference which both the advertiser and the ASB have failed to recognise.  'Thin and beautiful' as defined by our narrow cultural beauty standards does not necessarily mean 'healthy.' Similarly, those who don't fit the narrow beauty standard ie. older and/or larger, are not necessarily 'unhealthy.' We cannot and should not presume to know someone's health just by looking at them.

In addition to sexual objectification, the ad is misleading. The company has appropriated the name of a well known environmental organisation 'Keep Australia Beautiful', for its own benefit. 'Keep Australia Beautiful' is a long standing community based movement which aims to create a cleaner environment through the promotion of anti-litter campaigns. Some of the complaints to the ASB have demonstrated the connection people see between this slogan and the anti-litter campaigns.

The ad has nothing to do with "helping to keep Australia beautiful". The ad is fake misleading advertising! It doesn't have a rubbish bin or rubbish in the ad but a close up of a headless fake woman wearing a tiny bikini!!!

The woman in the ad is not picking up rubbish so what is the ad telling society??

Vitaco has completely ignored these concerns. It is a shame that the ASB has allowed the name of a well respected environmental organisation to be used in the objectification of women for profit.

Vitaco has combined the objectification of women with a well known environmental campaign slogan to market a diet product. It has done this under the thin veil of 'health.'  We're not buying it and neither should you.

Looking at this ad, we are reminded of a great quote posted on Spark Summit's facebook page some time ago: "A two-step approach to having a ’beach body’: have a body, take it to the beach. How often the simple solutions elude us!"

Tell Vitaco what you think of its sexist ad campaign here. (Update: many who have tried to contact 'Vitaco' via the email form on their 'Aussie Bodies' website have received an error message. If that is the case for you, leave them a message on facebook: http://www.facebook.com/aussiebodies )

After we campaigned against this ad, Vitaco created an on line survey and encouraged people to share their views. Our supporters were glad to have this opportunity.

A Vitaco representative has now contacted us to let us know they will no longer be using 'Keep Australia Beautiful' ads in future. Aimee from Vitaco left this comment on our blog:

Thanks for your feedback.
I am responding on behalf of Vitaco/Aussie Bodies and firstly, I would like to apologise.

The campaign was never designed to offend, and until we received the complaints I never saw the harmfulness.

Nevertheless, I appreciate your feedback and dispite the complaints being dismissed by the ASB, we have listened and independantly decided to put a hold on all future ‘Keep Australia Beauitful’ advertising until we discover an alternate creative solution.

We've since been in contact with Aimee to let her know that the billboards are still up. These photos were taken just recently. 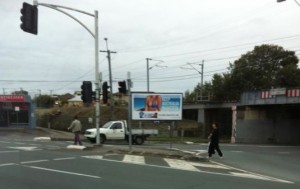 Aimee has said she will be in contact with APN about having the ads taken down. Thank you Aimee for contacting us.