Collective Shout supporter Sheenah calls on radio station to explain their silence on Tyler the Creator's incitement to violence against women.

In 2014 a member from hip hop band Bliss and Eso made an insensitive comment about domestic violence, putting up an instagram post that mocked violence against women. I was surprised, yet impressed, when Triple J made a stand by refusing to play any Bliss and Eso tracks for an extended period of time, stating that they would ”wait on the audience sentiment before playing the band again.”

Given that Triple J’s Hack and the ABC have often covered issues such as domestic violence, and the fact that there has been an increased amount of violence toward women in Australia, it made sense that they would take such a stand. Taking all of this into consideration then, it has continued to baffle me over the years to see Triple J constantly support, promote, and play music from Tyler The Creator. 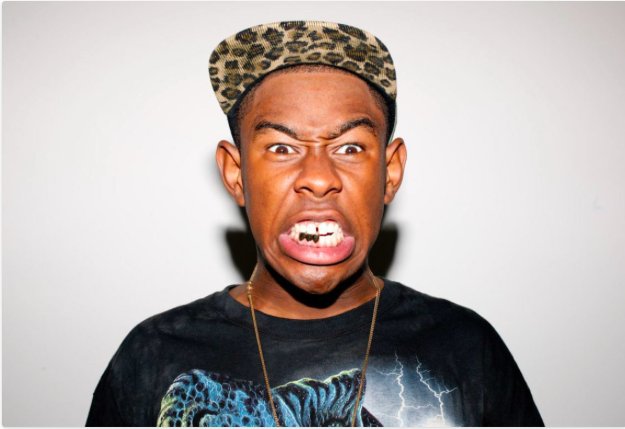 Everyone knows that Tyler thrives on creating controversy, and his fans often explain his behaviour and lyrics as nothing more than a stage character. However, this just isn’t true.

In 2013 Tyler came to Australia to play all-ages shows, despite the fact that his lyrical content included graphic descriptions about murdering women, mutilating their genitals, and raping pregnant women; as well as including homophobic slurs.

When a young Australian activist criticised his lyrics and questioned why Australia was allowing him to perform here, Tyler turned abusive, not only verbally threatening and abusing her at a concert (which she was present at) but also dedicating a song called ‘Bitch Suck Dick’ to her. Going even further, he encouraged his millions of twitter followers to turn their abuse toward her. Below is a snippet from an article where Talitha discusses the moment where Tyler began abusing her from the stage (she also captured this abuse on video). 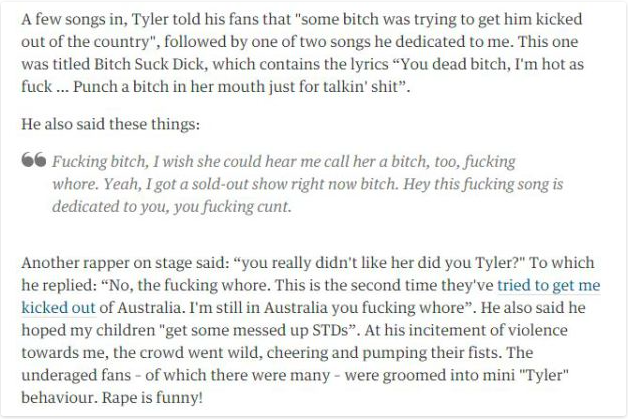 As a result, this young woman received hundreds of rape and death threats, and a twitter user even leaked what – thankfully – was a slightly incorrect home address. What was Tyler’s response to the actions of his fans?

Another young woman was also sexually assaulted at one of his Australian gigs, and Tyler has also been known to encourage riots at other concerts. His attitudes toward women are not a character – he has proven this clearly with his actions.

The thing about MC Eso, is that despite the insensitivity and truly offensive nature of his comments, he apologised. Tyler’s lyrics and music may have changed and become somewhat less horrific, but he has never, at any time, apologised for his actions while in Australia, nor has he opened an intelligent, sincere discussion surrounding the issues he glorified in his music (saying that he’s just playing a character, and jokingly telling fans not to go out and rape and murder isn’t good enough).

Obviously not every person who listens to Tyler is guaranteed to be a rapist, murderer or homophobe, but as a nation trying to fight against violence, which in 2015 is claiming the lives of 2 women EVERY week, how can we allow someone like Tyler in our country?

How can Australia, and ABC’s Triple J continue to support someone who encourages violence at his shows, who caused extreme emotional trauma to a woman just for questioning his lyrics, and who is unapologetic, be allowed to perform all-ages shows here?

Triple J – make a stand. Stop supporting Tyler the Creator. Please remove his music from your station. You can’t sit on both sides of the fence when it comes to violence against women – or any gender or sexuality – in our country.

Reprinted with permission from She Warrior Blog.

Sheenah shared her correspondence with Triple J with us:

Thank you for your email regarding Tyler the Creator.

The ABC's Code of Practice allows for the broadcast of potentially offensive content, including coarse language, if it is editorially justified and carries an appropriate warning. The extent of what is acceptable depends on the intensity of any likely offence which takes into account the content context including the expectations of the target audience, which for triple j is 18-24 year olds. We are careful with the music that we play on triple j with each song being assessed prior to airplay in line with ABC policies. We do not air or condone any messages of misogyny or violence against women and songs with lyrics of that nature are not played on triple j. There are two songs from Tyler's current album 'Cherrybomb' that are being played - 'Deathcamp' is on our playlist and a track called 'Smuckers' was played once as a request by the artist All Day. Content warnings are given by the presenters prior to the tracks being played.

We acknowledge that Tyler is divisive, but he is a celebrated artist of which a fair proportion of our audience, both men and women, are fans. On his latest album, he has worked with Kanye West and Pharrell Williams, among others, who are important artists to triple j's audience. We are also aware of the controversies from Tyler's previous tours and we covered them on air at the time by giving voice to those protesting his presence in Australia.

We appreciate you taking the time to write to share your views.

Thank you for taking the time to personally reply, I do appreciate your response.

I feel you may have misunderstood the crux of my objection however. I understand that Triple J play many songs that have potentially offensive or coarse content, however this is not my main issue. What I cannot understand, is how the station can make a personal decision to take such a strong stance against an artist (for example MC ESO) for making jokes about violence against women, yet then purposely promote another artist who has actually incited violence against a physical woman - in this case, an Australian woman by the name of Talitha Stone.

It seems very strange that the ABC and Triple J would claim to care deeply about not supporting violence against women (or any individual for that matter) and take such a strong stand against a joke against a wax figurine, yet completely look the other way when an actual Australian is abused by Tyler The Creator.

It would be great to see Triple J and the ABC actually take a firm and unwavering stand on this issue - by pulling support from Tyler's upcoming tour - as it is one which sees 2 women killed by male violence every week in Australia.