How encouraging it is for those of us involved in trying to make things better for women and girls when men stand with us and want the same. Readers will remember when David Ould took on Loveable for its objectifying advertising. Now No To Violence Male Family Violence Prevention Association has taken on Rivers for glorifying violence against women in its advertising, confronting the company for being part of cultural support systems for violence against women. Here's their letter as posted to Collective Shout's site: 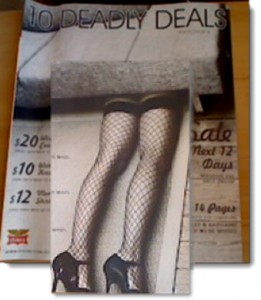 I write with regards to the current Rivers advertising campaign that features a representation of a dead woman lying under a couch, with the title ’10 Deadly Deals’.

No To Violence Male Family Violence Prevention Association is appalled that any organisation, company or individual would seek to promote any product or service by using imagery that celebrates violence and abuse towards women. This campaign plainly seeks to trivialise an issue that affects one in three women around the world, including Australia, and celebrates the behaviour of men who use violence towards women and family members.

No To Violence, incorporating the Men’s Referral Service, and its members, including Victoria’s 39 Men’s Behaviour Change Programs, works directly with men who use violence towards women and seeks to affect real cultural change in the ways that women are objectified, abused and violated on a regular basis. Our aim is to eliminate violence against women and hold men – and others – to account regarding this insidious and despicable behaviour.

On average, around 70 women die at the hands of current or former male partners in Australia. Consider, then, that more than one woman per week is killed this way in our country. Rivers, by virtue of this current advertising campaign, makes light of this issue and trades on it.

This campaign would also be traumatic for women who have experienced violence and others who have been touched by family violence and violence against women. And, of course, this type of campaign is entirely unnecessary.

While our members are being advised to boycott Rivers at this time, I encourage you to remove this campaign immediately and consider the personal negative implications of future campaigns.