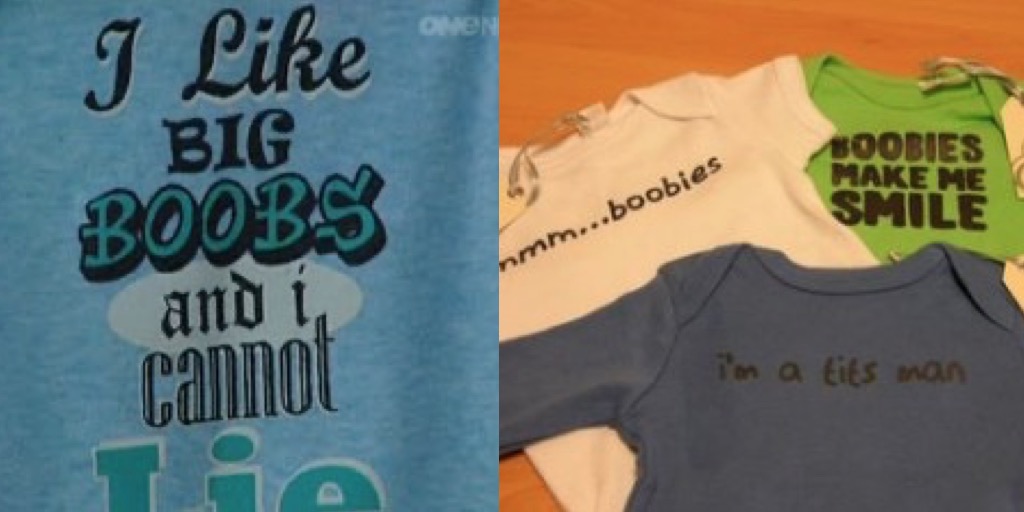 They want the raunchy rompers and tops withdrawn, but unrepentant retailer Cotton On says they are simply meant to be funny, the Herald Sun reports.

Kids Free 2B Kids director Julie Gale bought the items at Cotton On Kids in Malvern on Monday.

Ms Gale said as a comedy writer and performer she had a great sense of humour, but using babies and children as "a vehicle for sexual innuendo" was unacceptable. Read more.

CLOTHING company Cotton On has admitted it "crossed the line" and today vowed to withdraw a range of offensive children's t-shirts, including one making light of child abuse, after a consumers threatened a boycott.

A t-shirt emblazoned with the slogan "They Shake Me'' was the last straw for many angry parents, who sent emails and Twitter messages to the company this morning expressing their disgust and an intention to vote with their feet.

Last month Cotton On had stuck by its range of shirts, which included slogans such as "I'm a tits man'' and "I''m living proof my mum is easy'', saying there was a place in the market for their "edgy'' humour that pushed the boundaries.

But today, as anger spread through the social networking sites, Cotton On finally cottoned on to their customers' feelings, offering a contrite apology and a promise to withdraw the offending items from sale.

"Cotton On Kids were unaware until recently that the slogans were being viewed as offensive and that they could progressively cause this extent of angst amongst consumers and social groups alike,'' the company's statement released this afternoon said. Read more.