Campaigns Manager Caitlin Roper's new book Sex Dolls, Robots and Woman Hating: The Case for Resistance was launched online by Viviane Morrigan. You can watch the video on YouTube, or read her speech below.

I’ve been a fan of Spinifex Press, Australia’s leading independent feminist publisher, for a decade. Whenever I attended feminist events, I’d always make my way over to the Spinifex table to buy their books. As anyone who’s ever been in my lounge room and seen my bookshelf can attest, there’s a lot of pink! So having my first book published by Spinifex Press is a dream come true.

Renate and Susan, I’m so grateful to you for believing in me and in this book. Thank you to the whole team – Renate, Susan, Pauline, Rachael and Maralann.

Thank you to Viviane for agreeing to launch my book today – I’m so glad you said yes.

To my incredible colleagues and dear friends at Collective Shout – you are the very best, and you keep me going. Thank you MTR, Melinda L, Lyn, Renee and Daniel. Special thanks to MTR for reading early chapters and giving feedback, even as you were working on your own book!

To the wonderful women at the Feminist Academy of Technology and Ethics, or the FATES –Kathleen, Shirley, Charlotta, Melissa, Lydia, Jo and Viviane – you are all brilliant feminist thinkers and I’ve loved being able to read and discuss this topic and others with you, and to learn from you all. Stay tuned for news about our upcoming book!

To Caroline Norma and Emma Dalton, thank you for helping me to shape my ideas, and for your support.

To Gail Dines, Sheila Jeffreys and Robert Jensen, thank you so much for you kind endorsements of this book. They mean so much to me.

To my friends and family, my kids (who are not allowed to read the book) and to Justin – your support and enthusiasm has been amazing.

To everyone who has promoted the book or shared my work, thank you for helping to get this message out there. I really appreciate it so much. 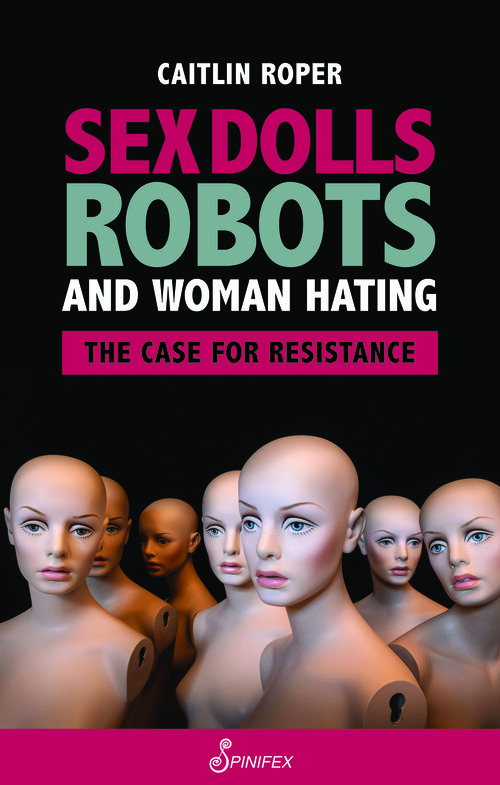 I wrote Sex Dolls, Robots and Woman Hating to expose the inherent misogyny in the global trade in female-bodied sex dolls and robots for men’s sexual use, and as a warning of the real-world harms to women and girls, which I will outline tonight.

Sex dolls and robots represent the literal objectification of women. They are premised on our objectification and dehumanisation. They are objects to be used in place of women, embodied representations of women designed purely for men’s sexual gratification, manufactured for the express purpose of being sexually used. They function as pornified, replica women that are always sexually available. The belief that women are objects, or interchangeable with objects, or that we exist to be sexually used by men, harms women as a whole.

Despite this, advocates in academia – who are mostly men – claim the development of sex dolls and robots should be actively encouraged, and that they could have many benefits. Just not for women.

Sex doll and robot advocates, both inside and outside of academia, fail to consider how these pornographic dolls and robots modelled on the bodies of women and girls might harm women and girls.

They neglect to examine how female-bodied sex dolls and robots reinforce and further entrench attitudes of sexism, how they diminish women’s humanity, or encourage men’s sexual entitlement to women’s bodies.

They don’t consider how sex dolls could function as a form of sexual harassment, as men impose their sexual fetish on women in both public and private, how women are being harmed by their partner’s sex doll use, or violated by sex dolls made in their likeness without their consent.

They fail to contemplate how replica women sex dolls that are endlessly available for men’s unlimited use could contribute to rape culture or men’s violence against women. They appear to be more concerned with men’s orgasms than the very real harms to women and girls, which I document in the book.

Sex dolls and violence against women

I explore how the production and use of female-bodied sex dolls encourages and contributes to male violence against women.

Sexual objectification is at the root of men’s violence against women, in all its forms. If women are seen as things, as objects, rather than fully human, then it’s easy to justify our abuse and mistreatment.

Men tied up their dolls, used make-up to give the illusion of bruises after a beating, and acted out scenarios of sexual slavery and predation on their dolls. Some said they used their dolls in preparation for sexual relations with women, practicing and fine-tuning their ‘skills’ on the dolls.

But providing replica women for men to enact violence doesn’t prevent violence, it is violence in and of itself. The violence isn’t simulated, it’s not a ‘fantasy’, it is real – and men are enacting this violence on a silicone body that looks and feels like a real woman. They’re having the experience of perpetrating violence against a woman – one that provides no emotional feedback – which is reinforced by an orgasm, and encouraged by other forum members.

Having access to replica women to practice rape, violence and abuse doesn’t prevent men’s violence against women – it’s just an extension of it.

How women and girls are harmed by sex dolls and robots

Women and girls are also directly harmed by men’s use of sex dolls. I share the accounts of women whose male partners purchased a sex doll, and their feelings of inadequacy, humiliation and distress as a result. These women couldn’t keep up with their partners’ sexual demands, and felt that they couldn’t compete with a ‘perfect’, compliant, pornographic doll.

Many of these women felt powerless to object to their partner’s sex doll. They described their heartbreak and devastation, and feeling as though they were being cheated on, but also dismissed their legitimate objections.

Some even prefaced their concerns by insisting that they weren’t “kink shaming”, and that they were very open-minded sexually. The concept of ‘kink shaming’, and the expectation that women should tolerate any and all of their partner’s sexual desires or be branded ‘vanilla’ or ‘prudish’, served to silence these women. Ultimately, the men’s sexual preferences were rendered more important than the women’s dignity or suffering.

Sex dolls are also being made in the likeness of specific women, without their knowledge or consent. Most sex doll manufacturers allow users to select the physical features of their dolls – like the body type, skin tone, hair and eye colour and things like that, but some also make dolls modelled on actual women.

Doll manufacturers report receiving requests from male customers for dolls made in the likeness of women known to them – their mate’s girlfriend, their next door neighbour, or a woman they have a crush on.

Some men claim to have had sex dolls customised in the likeness of specific women. The expression of misogyny here is clear – turning a woman into a sex doll against her will allows the user to violate, humiliate and degrade her, asserting his own dominance over her.

Sex dolls made in the likeness of girls

I devote two chapters to the trade in child sex abuse dolls – dolls modelled on the bodies of little girls, toddlers and even infants, all marketed for men’s sexual use. I’ve witnessed child sex abuse dolls in the likeness of toddlers with dummies/pacifiers in their mouths, dolls that appear to be crying or distressed, dolls that are photographed in defensive poses, and even child-like dolls that appear to be sleeping or unconscious, to facilitate the embodied experience of raping and sexually abusing a sleeping child.

I respond to claims from the paedophile rights advocates that these replica children with penetrable orifices are “sex toys like any other”, or “fantasy sexual outlets”. These men even claim providing paedophiles with childlike dolls to enact their fantasies of child rape could prevent their abuse of children.

But normalising and legitimising men’s sexual use and abuse of girls doesn’t prevent abuse, it just allows them to practice.

Men who are found in possession of child sex abuse dolls are almost always in possession of child sex abuse material – images and video of children being sexually abused. They are already sexually offending, and some even involve children known to them in their doll use, by customising dolls to look like specific children – and this is a service a number of doll manufacturers are now offering, to create a doll in the likeness of an actual child, based on a photo.

I argue that child sex abuse dolls don’t prevent sexual abuse, they just provide more ways for paedophiles to violate and sexually exploit children, even without having physical access to them.

The case for resistance

I wanted to expose the misogyny of this industry, and how women and girls are already being harmed by it. But more than that, I hope to inspire readers to action.

I want people to come away feeling more educated on the issue, and equipped to speak out and challenge the trade in sex dolls and robots – whether that’s lobbying government for new laws, calling on online platforms to stop selling these products, or even just challenging this narrative that sex dolls and robots are neutral or harmless, or this myth that they could prevent abuse.

At Collective Shout, we want to see a global campaign for uniform laws against child sex abuse dolls. We would love your help and your support to challenge the trade in sex dolls and robots.

Sex Dolls, Robots and Woman Hating: The Case for Resistance is available from Spinifex Press.

Pleasure machines: What sex robots tell us about men and sex - ABC