Calling on Media to #Askhermore at AFL Brownlow Medal

The annual Brownlow Medal award ceremony will be held tonight to celebrate the sporting accomplishments of AFL players.

The Brownlow red carpet highlights a larger trend in the media, where women can be regarded as purely decorative. Wives and Girlfriends of players (identified collectively as WAGS) are observed and celebrated primarily for their physical attractiveness.

In the majority of red carpet interviews, reporters focus on women’s choice of attire, with gossip columns praising women who live up to specific standards of fashion and criticizing those who they deem to fall short.

At the 2011 Brownlows, women were rotated on an elevated platform dubbed the “fashion pod”, likened to a rotisserie displaying women like yum cha.

In 2012 Triple M hosted an online comp "Who's got the hottest WAGs? AFL or NRL? WAG Of Origin!" Visitors to the site can vote "rock" or "shock." SEO tags used by Triple M to draw people to the site include 'boobs' and 'breasts.'

This year the AFL and sponsor Swisse are encouraging viewers to vote for the 'best dressed' on the Brownlow Red carpet. 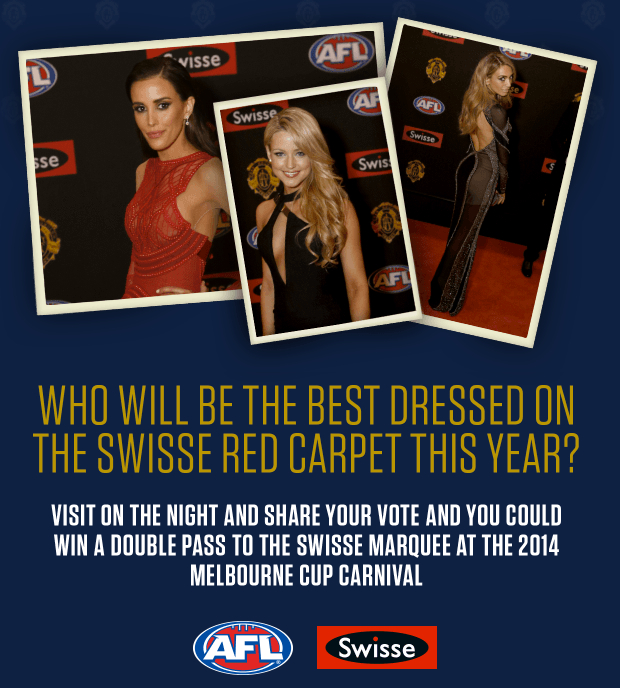 This constant focus on beauty perpetuates the notion that women are to be valued for their physical appearance rather than their accomplishments or contributions to the world.

This is why we are inviting you to join us in tweeting to reporters and media challenging them to ask these women questions about their achievements, who they are and what they care about. And why not ask them about football?

It is our hope that together we can challenge persistent limiting stereotypes about women and work towards a culture that values women as whole persons, valued for their character and achievements and not just their outward appearance.

Here's what to do:

Share the link to this article with friends and invite them to get involved.

#askhermore is an idea originating with the Representation Project.

Read about the Representation Project and the previous #askhermore campaign here: http://therepresentationproject.org/askhermore-how-the-media-talks-to-women-on-the-red-carpet/