The Herald Sun reports on campaign against Cotton On Kids and NSW MP calls for a boycott.

RAUNCHY baby rompers emblazoned with “I’m a tits man”, “I’m bringing sexy back” and “Milk today, beer tomorrow” are still on sale three months after retailer Cotton On promised to withdraw them.

Family advocates are upset the company appears to have ignored community outrage generated by the tot tops, and are calling for a boycott of retailer Cotton On. Read more at the Herald Sun. 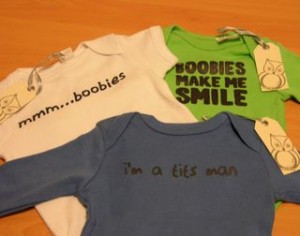 NSW Government Whip Greg Donnelly, MLC, has called on Christmas shoppers to refuse to spend money at the clothing store Cotton On. Cotton On continues to stock sexualised clothing for babies and toddlers, despite an undertaking some months ago to withdraw the offensive items.

Greg Donnelly MLC has called on shoppers not to spend one cent in Cotton On stores in the lead up to Christmas until they honour their promise to get rid of offensive t-shirts for babies.

“The company promised to withdraw this offensive merchandise over three months ago after being “outed” by Kids Free 2B Kids”, said Greg Donnelly.

They admitted that the t-shirts for babies had crossed the line after Julie Gale, Founding Director of Kids Free 2B Kids, challenged them about slogans like “I‟m a tits man”, “I‟m living proof my mum is easy” and “I‟m bringing sexy back”.

“However, this company is all talk and no action. On 23rd November I visited the Cotton On Kids store at Westfield, Hornsby. I purchased, to show my Parliamentary colleagues, four baby t-shirts with the slogans "Lock Up Your Sons‟, "Lock Up Your Daughters‟,
"mmm…boobies‟ and "I‟m a tits man‟.”

“Since when has it been OK for grown-ups, and I use that term loosely, to turn children and babies into walking billboards for adults sexualised humour.

“The evidence continues to mount that the sexualisation of children and young people is having a very serious impact on their well-being. It impacts negatively on cognitive functioning, physical and mental health, sexuality and beliefs”, said Greg Donnelly.