Why you should make a complaint to the Advertising Standards Board

Have you seen an ad that objectifies women or sexualises children? You can - and should - make a complaint to the Advertising Standards Board (ASB).

For change to happen, we need to make our voices heard. Complaining to the ASB is one very important way to do this. In fact, it is the first thing you should do if you see an ad that objectifies women or sexualises girls. It takes just one complaint to trigger the Board's complaint handling process.

Make a complaint to the Ad Standards Board - CLICK HERE

How do I make a complaint?

You can post, fax, or submit your complaints online, via their website. The ASB's preferred option is for people to fill out the online form. This allows the ASB to more efficiently process complaints. It takes around 5-10 minutes to fill out and submit. You are required to provide some information about yourself (ie. your name and contact details) but if you wish your information to be kept from the advertiser, there is a box you can tick which indicates that you want your personal information kept confidential. Once you have submitted your complaint, you will receive a confirmation email from the ASB indicating that they have received your complaint.

How does the Ad Standards Board work?

The ASB is the advertising industries self regulated complaints handling arm. They are responsible for receiving and considering complaints about outdoor advertising (such as bus shelters and billboards) television ads and print ads. Whether the ad generates 1 or 100 complaints, the ad standards board will address the complaint at their next scheduled monthly meeting. In making a decision about the ad they will consider whether the ad breaches the industry codes of practice. If it does, your complaint will be upheld and the ad will be banned.*  If the ASB does not consider that the ad has breached the industry code of practice, they will dismiss the complaint. Complainants will receive a notification via post or email advising of the outcome of the complaint. The outcome of the complaint will also be published on their website. (Your personal details will not be published.)

* While most advertisers comply with ASB determinations and remove ads voluntarily, the board lacks legislative power to compel advertisers to remove advertising. Often by the time complaints have been upheld, the offending advertising campaign has run its course anyway. In the case of  the 'Aussie Boat Loans' billboard, the advertiser was initially non-compliant. After discussion the Ad Standards Board convinced the advertiser to remove the billboard, but this occurred a full month after the determination and just 1 week before the scheduled end of the advertising campaign.

If it only takes 1 complaint for the Ad Standards Board to review the ad, why do you want many people to submit complaints?

When Collective Shout campaigns against sexism and objectification in advertising, we always ask people to make a complaint to the ASB. We can make a stronger case if everyone who has seen the ad and who objects to it to submit a complaint. We want you to show the ASB and the government that the community really does care about these issues. 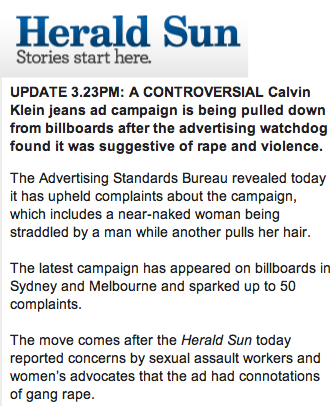 The number of complaints received by the ASB about sexism, objectification and sexualisation becomes even more important when the government holds an enquiry into advertising regulation. If there aren't many complaints on record, the ASB may claim that the community is not concerned about advertising content. But we know our thousands of supporters do care about advertising content and regulation. We call on all of you to make sure you let the ASB know what you think at every opportunity.

I've made complaints to the Advertising Standards Board and I could not believe they dismissed my complaint! Why should I bother doing that again?

We understand the frustration of receiving a 'complaint dismissed' notification from the ASB. Many of us make complaints fully expecting them to be dismissed. We often warn others making complaints that this might happen. We persist with making complaints because there is a bigger picture we need to look at. We are working towards a 'world free of sexploitation' and we need to utilise all tools at our disposal. Remember, all complaints, dismissed or upheld are recorded and reported on.

So the Advertising Industry is 'self regulated' - that explains a lot

Collective Shout has contributed to two government enquiries relating to regulation of advertising and media; Inquiry into the regulation of billboard and outdoor advertising and Inquiry into the Australian Film and Literature Classification scheme. In both of these submissions we have argued that the system of self regulation is flawed, due to a weak code of ethics, the voluntary nature of the code, lack of pre-vetting, the ASB's lack of power to remove advertisements, inadequate monitoring, de-sensitisation of panel members, little to no consultation with child development experts and no meaningful penalties to provide any real incentive for advertisers to change their behaviour. We believe advertisers are using the current system to their commercial advantage and the ASB is conflicted in their role, relying on funding from the advertising industry itself. They are not distant enough to be completely objective.

We have recommended that responsibility for regulation be given to an independent body or authority. The code of ethics should be amended to reflect that the objectification of women and sexualisation of children are a threat to the health and well being of women and girls. Unsolicited exposure to sexualised and objectified images should be understood as a form of sexual harassment. International research and child development professionals should be consulted to ascertain the possible impact of sexualised advertising.

To read more about our views on advertising regulation, you can read our submissions here:

Make sure you submit a complaint to the Ad Standards Board

Until we see changes in the way advertising is regulated, the ASB remains the official complaints handling process we need to use. Next time you see an ad you object to, make sure you record your complaint with the advertising standards board.

To read more about the Advertising Standards Board or to submit a complaint, visit their website.

This information was provided to assist you in making your voice heard. If you have any questions or comments, please post them below.