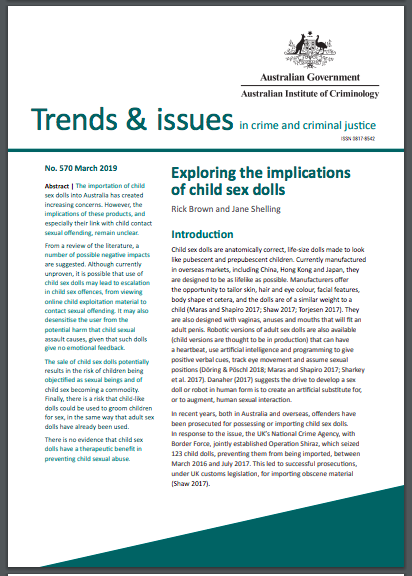 The report documents a range of potential harms associated with the production, distribution and use of child sex dolls.

It is possible that use of child sex dolls may lead to escalation in child sex offences, from viewing online child exploitation material to contact sexual offending.

It may also desensitise the user from the potential harm that child sexual assault causes, given that such dolls give no emotional feedback.

The sale of child sex dolls potentially results in the risk of children being objectified as sexual beings and of child sex becoming a commodity.

Finally, there is a risk that child-like dolls could be used to groom children for sex, in the same way that adult sex dolls have already been used.

There is no evidence that child sex dolls have a therapeutic benefit in preventing child sexual abuse.

It is ‘reasonable to assume that interaction with child sex dolls could increase the likelihood of child sexual abuse by desensitising the doll user to the physical, emotional and psychological harm caused by child sexual abuse and normalising the behaviour in the mind of the abuser’.

We have previously exposed Wish app and Amazon for selling child sex dolls, along with a range of other replica child body parts marketed for sexual use. In response to our campaign, Wish withdrew these items from sale.

Against her will’: Amazon sells exploitative books glorifying rape and sexualising children