“The heart of The Male Champions of Change strategy involves men of power and influence forming a high profile coalition to achieve change on gender equality issues in organisations and communities.” – malechampionsofchange.org 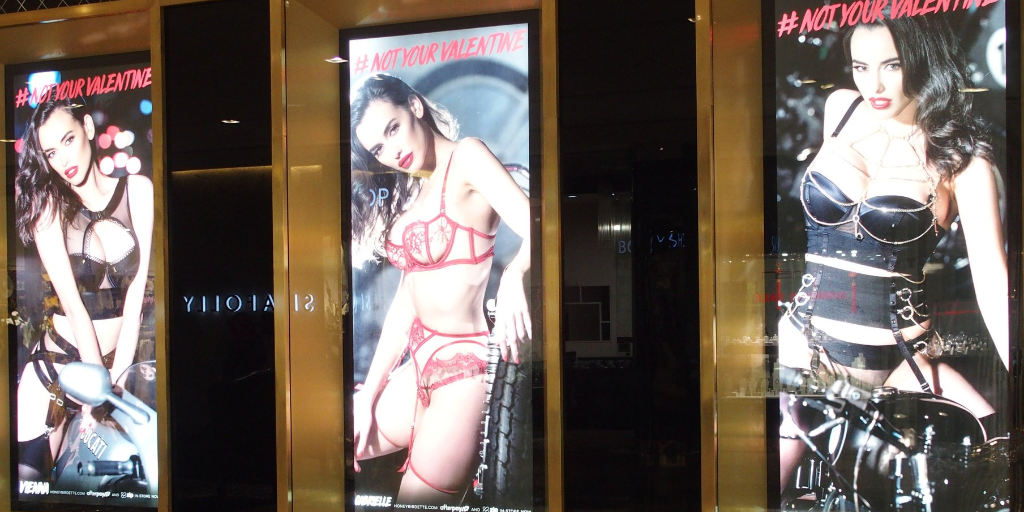 Founded in 2010, Male Champions of Change are a group of self-described ’powerful’ and ’decent’ men who are ’stepping up beside women’ to promote gender equality and to eliminate ’everyday sexism.’ The group consists of more than 200 members who are CEOs and Directors of various organisations and corporations. With the recent creation of the Male Champions Technology Group, the organisation is expanding its reach across the globe. But while the group’s goal to achieve change on gender equality issues is admirable, in practice there is inconsistency. As this petition demonstrates, how do you commit to eliminating ‘everyday sexism’ when, as a male champion and shopping centre CEO, you allow floor-to-ceiling pornified portrayals of women which undermine all you claim to stand for?

The 71,000 individuals who have  signed Melbourne father Kenneth Thor’s petition, are to be commended for their efforts.  But the goal of the petition is to see change. At 19 months on, nothing has changed. The ‘male champions’ have ignored the concerns of thousands.

Dr Bianca Fileborn (UNSW)  writes on the harm of “routine silencing and trivialisation of victims’ experiences of sexual harassment”. Social  and cultural attitudes cannot be changed unless the experience of harm is made visible via disclosure: the declared testimonies from victims about their experiences of harm.

Without disclosure, harm remains invisible, and opportunity to change a victim’s fateful condition is limited if not non-existent.

“Giving a harm a name is the first step in making the harm visible.” - Deirdre Davis, “The Harm That Has No Name: Street Harassment, Embodiment and the African American Woman,” 1994

Failure to describe harm results in greater, persistent or possibly life-endangering harm. There is no cure for an unnamed harm – there are only stabs in the dark.

This petition is in essence seeking change to the way women are treated, portrayed and perceived in public space. To this end, the petition is emphatic in its declaration of harm as well as its description of harm. But is the message getting through?

Here it is helpful to look at the standard method of seeking recourse when opposing the public display of any particular ‘advertisement’ - the avenue pursued by Kenneth Thor when he initially saw, in the company of his young family, Honey Birdette advertising during a dinner outing at a Westfield shopping centre. This is essentially the standard for disclosure. The process goes: walk through shopping centre, see advertisement, contact centre management with ‘concerns’, receive direction to Ad Standards, lodge a complaint, wait, receive notification of ruling, end; repeat.

For the simple reason that there has been no other method for addressing objections to sexualised advertising, this process has placed well-meaning and rightfully-motivated members of the public on a hamster wheel of communication exchange about ‘customer service concerns’ and ‘advertising complaints.’

The process itself places constraints on discussions surrounding the issue of public displays of sexualised imagery. It relegates what is in fact disclosure of harm to ‘concerns’ and ‘complaints’. Here lies a significant problem: the standard method of disclosure insufficiently defines the terms used to describe the experience of harm. By conflating opposition to these public displays with ‘concerns’ and ‘complaints’, the standard process trivialises the experience of harm. Do Male Champions of Change understand the harms that the petition describes?

It’s important at this point to look at ‘sexual harassment’ and to clarify what it is. There are three hallmarks of sexual harassment. First, it is sexual in nature. Second, it is unwelcome. There is no question that Honey Birdette advertising bears these necessary hallmarks of sexual harassment. A third feature often cited in legal and academic references is the presence of a power imbalance: the harasser has a superiority of position or power in relation to the victim whereby the behaviour of the harasser consolidates the power imbalance and places the victim at the harasser’s mercy.

We propose that failure to understand or acknowledge what this petition actually represents – a new platform for disclosure of sexual harassment – is causing a latent response to the petition and thus facilitating persistent harm. By not engaging in the petition’s discussion, the ‘Male Champions’ have succeeded in the continued trivialisation and silencing of victims’ experiences of harm.

Honey Birdette, and other companies engaging in sexualisation and objectification in their marketing and products, are perpetrators of sexual harassment. They do not merely incite ‘concern’ or inspire ‘complaints’. They cause harm. Members of the community (Kenneth Thor, you and I, our children) are the victims of harm.

The unwelcome display of sexualised imagery constitutes sexual harassment. An individual expressing opposition to Honey Birdette window displays is not conveying a ‘reaction to an advertisement’ or a response to a ‘customer service experience’. They are giving testimony to harm they have suffered due to unwanted exposure to sexualised imagery.

Accordingly, the ‘Male Champions’ are not guilty of ignoring concerns or complaints. By their inaction they have so far demonstrated a comprehensive dismissal of 71,000 testimonies and bystander statements of sexual harassment – the harms of which have been suffered in retail space owned by the corporations they lead. In a #MeToo, #TimesUp era, this dismissal is unsustainable. In any era, it’s reprehensible.  It is in this light that we reassert our challenge to the naming of these men as any sort of ‘male champions’ who are either ‘stepping up beside women’ or ‘eliminating everyday sexism.’

What these so-called male champions truly represent is a group of enablers: facilitators of en masse sexual harassment and mistreatment of women. Until these men acknowledge the declared and described harms perpetrated and suffered inside their shopping centres, they serve to trivialise and silence these experiences of harm. There is no choice but to conclude that so-called ‘Male Champion’-led shopping centres are venues playing host to sanctioned hostility toward women.

Lyn Kennedy, BSc (Hons)  – Science, Technology and Society. Lyn’s motivation is to see women and children thrive. A Perth-based mother advocating for protections from hyper-sexualised and porn-themed advertising in public space, Lyn is a keen supporter of Collective Shout.