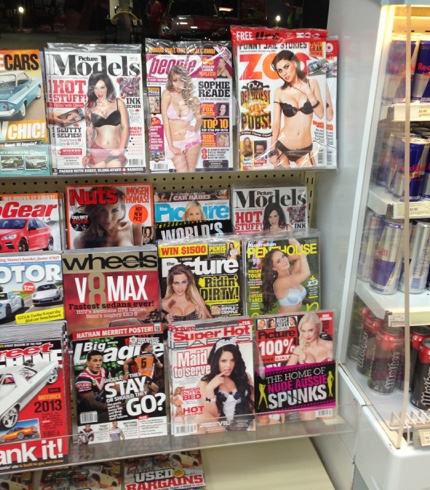 Many of our members who went to comment on the article were put off from doing so, by the hostility shown in these comments. We asked Heidi how she felt about the reaction.

This is what she had to say:

Last week's blog post resulted in an overwhelming response both in the number of hits to the site and also the number of comments received. Clearly, people have very strong opinions when it comes to porn and its availability. As a journalist I believe very strongly in freedom of speech and I therefore published comments to my blog that were both for and against my point of view. However, in doing so I found it quite alarming that many of those who disagreed with me chose to do so by attacking me personally rather than engaging in a rational discussion on the topic.

"Oh dear another article from a bleeding heart normally bringing attention to herself as she struggles to reign in a two year old throwing another huge tanty at the supermarket."

And this:
"What else are you refusing to discuss with your children due to your own discomfort? This article is more about your lack of will parenting than the ills of society."

And my favourite:
"Shame on you for being so hateful of males."

Heidi gives two examples of what she is concerned about: Finally legal – don’t tell my dad and Bangkok over this hot Asian. It seems to me that it is reasonable to have concerns about celebrating pedophilia and incest in the first instance, and about celebrating a mixture of racist and sexist abuse in the latter instance. I can’t understand how the display of these headlines in a service station upholds the principles of freedom of speech or of opinion. And I can’t understand how the removal of them from public display would infringe those same principles.  The hostile comments to Heidi are simply a defence of the practice of subordination and degradation, nothing more fancy than that.

I also don’t understand how Heidi’s expression of concern about these examples of pornography in the service station can be twisted around to suggest that she is against sex or against men. There is not a shard of evidence in this piece (or in her other writings) that Heidi has a problem with nudity or sex. It seems to me, again, that it’s not the sex that is at issue here. What the argument is really about is the very simple question: is the subordination of women defensible or not? I think not.

So here is Heidi's article. We invite those of you who were put off commenting on the Brisbane times blog, to leave your supportive comments below. Thank you again Heidi for writing the article which illustrates what organisations like Collective Shout, Kids free 2B Kids, over 30 child experts and advocates and members of the community have been campaigning to change.

Hmmmm. No, maybe honesty is not the best policy in this scenario.

Should you lie to her? “Well, darling it must have been a very hot day that day.”  No, not really cutting it.

Better still, if your daughter can read she’ll be privy to headlines like Finally legal – don’t tell my dad and Bangkok over this hot Asian.

So you pay your bill quickly, trying to block her view, and head back to the car hoping an upbeat version of Cold Spaghetti might erase her short-term memory.

Where is a mother to turn in these days of sex, sex and longer lasting sex, not to mention sex tapes, sex dolls and sex shops?

So is it hurting anyone?

If viewing pornography leads to an increased likelihood of sexual assault, pedophilia and marital breakdown then the answer is simple: yes.

But that’s just what the research tells us - maybe we should hear from some people in the sex industry themselves.

It’s impossible to close my eyes and blindfold my child while I pay my fuel bill or pick up a newspaper from the newsagent.

I want to raise my two daughters to believe they are worth more than what is between their legs, but as children they will be confronted with this and this, as teenagers this, and as women the bombardment continues.

This month the UN created the “UN Entity for Gender Equality and the Empowerment of Women”, in a bid to “promote gender equality” according to Secretary-General Ban Ki-moon.

Let’s help the Secretary-General out and get this trash out of our servos and off the shelves of our convenience stores and into adult shops where it belongs away from the eyes of our children.

Now bring on the femi-Nazi labels and the pot shots at my sex life and call me a prude as much as you like. Given 100 per cent of men view pornography by the time they’re 15, I’m not expecting the male population to applaud such a move.

Any men care to prove me wrong?