After Ad Standards upheld complaints, the company pulled the ad

A Collective Shout supporter made a complaint to Ad Standards after an ad for Wet Pussy Shot with the slogan “Let’s Get Wet” after the ad appeared unsolicited in her Facebook feed as a sponsored post. 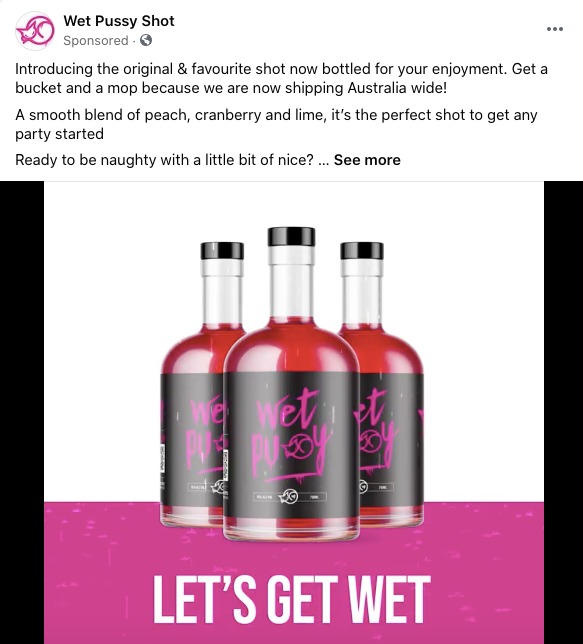 In her complaint, she wrote,

Both the name of the drink and the accompanying slogan, referencing women's vaginal lubrication during sexual arousal, are sexist, demeaning and disrespectful to women. They objectify women by reducing women to a single sexualised body part ("pussy") and dehumanises them in reducing them to a sexual function. The ad encourages discrimination and sexual harassment of women.

Ad Standards found the advertisement to be in breach of both Section 2.1 of the code (which pertains to discrimination and vilification of a person or section of the community), as well as Section 2.2 (employing sexual appeal in a manner that is degrading):

The Panel considered that the name of the drink in combination with the gross exaggeration of female arousal is a portrayal which vilifies a section of the community on account of gender in that it humiliates and incites contempt.

The Panel considered that the name of the product was directly related to female sexual arousal. The Panel considered that this in conjunction with the phrase ‘Get a bucket and a mop’ was a portrayal of female arousal in a way which reduced women to a singular body part and suggested through gross exaggeration that there was something vulgar, messy or unclean about female arousal.

In response to Ad Standards' determination, the company responded that while they disagreed with the complaint, they had "assessed internally" with their team and had deleted the ad.

As always, we thank you for speaking out!