I recently walked in to a 7-Eleven to buy myself a coke. As I approached the counter I was confronted with this: 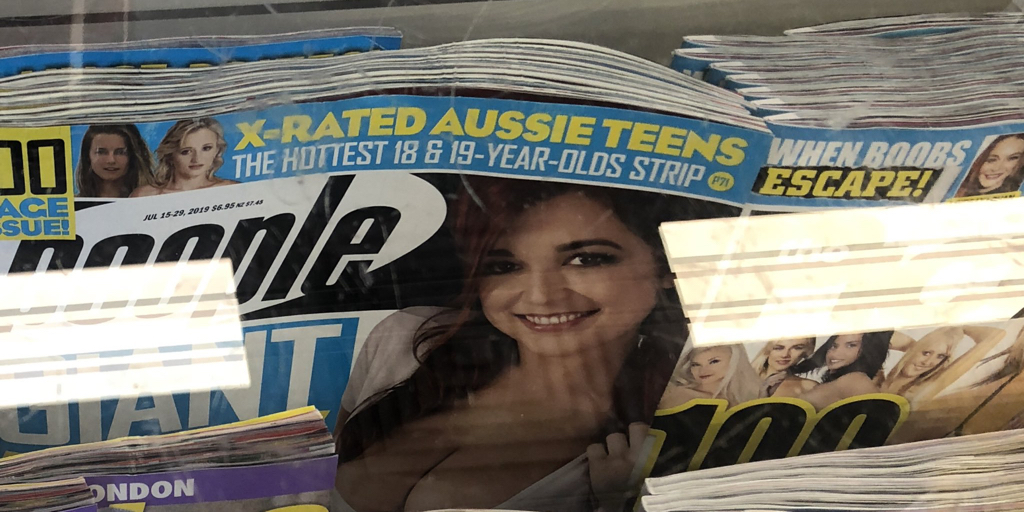 Anyone, including minors, can purchase this magazine. People, its publisher Bauer media, Australian Classification and 7-Eleven are all complicit in the provision of pornography to young people.

These magazines operate in a loophole created by a weak and negligent Classification system. Despite pornographic content, Australian Classification rates the magazine 'M.' This means recommended for - but not restricted to - ages 15+. #AustralianClassification #sexualisation pic.twitter.com/Z4zrnvVKft

Contact 7-Eleven. Tell them women and girls are not sexual objects and to pull 'unrestricted' pornographic magazines from sale in their stores.

Leave a comment below to let us know if you receive a response.

But the harm doesn't stop there. The display and sale of pornographic magazines in the public space creates a hostile environment for women and girls. Decades of empirical research shows this. A meta-analysis of 109 publications containing 135 studies found:

#AustralianClassification rates a magazine featuring teenage girls inviting men to sexually assault them in public as 'M' for mature audience aged 15 +. The mags are then sold unrestricted in @7Eleven_AU where kids come in to buy slurpees after school. pic.twitter.com/CAhUFllLgN

People magazine, July 2019, promoting the idea that teen girls want to be sexually assaulted and harassed]

The National Plan to Reduce Violence against Women and their Children 2010 – 2022 acknowledges the role of sexual objectification and sexism in creating a culture of violence against women.

The NSW Government in its 2016 report on sexualisation also acknowledged the links between media and advertising reinforcing sexist and stereotypical gender roles and men’s violence against women:

In other words, this isn't new information. But pornographic content eroticising sexual harassment and assault of young women is unrestricted and widely available.

These 'unrestricted' publications are very focussed on sexually exploiting teen girls. This issue of People bought from @7Eleven_AU classified as 'M' by #AustralianClassification includes a 'teen special.' How are teen girls supposed to feel safe in this culture? pic.twitter.com/YHgYDMMXCB

So why are retailers like 7-Eleven getting away with this?

One of Collective Shout's first campaigns, in 2010, related to the sale of magazines like People, Picture and Zoo in convenience stores. We called on retailers to cease selling them and lobbied the Federal Government to overhaul the classification system that created this problem.

In our submission to the Senate Legal and Constitutional Affairs Committee Inquiry into the Australian film and literature classification scheme in 2011, we highlighted the practice of 'serial classification.' This is where the Classifications Board reviews one copy of a publication and on this basis alone, gives the publisher a rating that applies to all subsequent editions of the magazine for up to 24 months. The publisher is expected to publish subsequent editions to fit within this classification, but the reality is the publisher is free to publish whatever content they like without further oversight or penalty.

We also pointed out that serious flaws with this practice had been brought to the attention of Australian Classification as early as 2008 by Julie Gale of Kids Free 2b Kids. We recommended to the committee that the serial classification scheme for publications be scrapped and each issue of a publication be submitted for classification. Our co-founder Melinda Tankard Reist also covered the issue here the same year.

This recommendation was not adopted and as a result, the onus is still on citizens to make complaints about pornographic publications. Collective Shout maintains that this is an unjust burden on citizens given the extended interaction with pornographic material required to follow through with a complaint.

But this is what we are doing. We will keep you updated on the progress of our enquiries to Australian Classification.

We got Zoo our of Coles. Help us get People out of 7-Eleven.