Advertisements that perpetuate sexist stereotypes, promote objectification and depict sexually explicit imagery will be banned in the UK, under rules being proposed by the Advertising Standards Authority (ASA).

The crackdown follows after an outcry over Protein World’s controversial 2015 “Beach body ready” campaign, which featured a bikini-clad model. Despite a 70,000-signature petition, the ad was still not removed for a number of months. 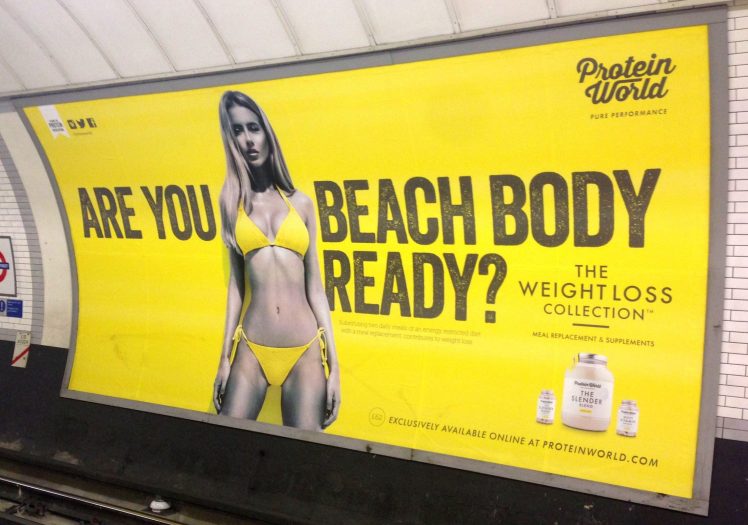 The Proteinworld advert which sparked a flurry of complaints to the ASA. (Picture: Getty)

The majority of complaints refer to the portrayal of women, according to ASA research. This prompted the ASA to clarify the existing code relating to ads that objectify or inappropriately sexualize women and girls and to introduce new policy.

The new policies proposed by the ASA will toughen rules on ads that are deemed to present stereotypical activities for women or men. They will also crack down on advertisements that mock those who do not conform to stereotypical gender roles.

“Our review shows that specific forms of gender stereotypes in ads can contribute to harm for adults and children,” said Ella Smillie, lead author of the report.

She continues to state “Such portrayals can limit how people see themselves, how others see them and limit the life decisions they make. Tougher standards in the areas we’ve identified will address harms and ensure that modern society is better represented.”

The ASA has clearly mentioned the new standards will not ban gender stereotypes altogether, only those that are seen to cause "potential harm". An advert that depicts a woman cleaning or a man doing a DIY project would not be considered problematic.

However, ASA states an ad featuring a woman having sole responsibility for cleaning or a man failing to complete a simple household task, would be considered prohibited under the new policy.

"Within the ad framework, a drip-drip feed of many ads featuring gender stereotypes for certain roles for boys and girls narrows people's views in terms of aspirations, what they can do and their role in society"

The purpose of these new rules is to challenge gender stereotypes and inequalities in a constructive and evidence-based manner.

"That's what we are trying to address in our own specific way."

Tara Kortel has a Bachelor of Social Science, specialising in legal Studies. She is currently completing the Bachelor of Criminology and Psychology.