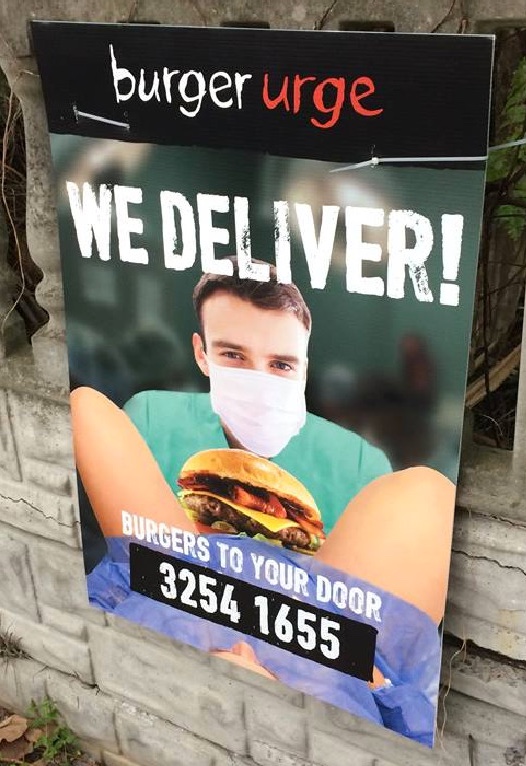 A QUEENSLAND burger chain has been called “disgusting” and “pathetic” after launching an advertising campaign for its new burger delivery service featuring a male doctor “delivering” a burger from between a woman’s legs.

Burger Urge, a chain of 16 restaurants around Queensland, posted photos of the signs on social media last week and out the front of residential properties. The sign says: “We deliver! Burgers to your door”.

“Seriously? That does not make me want to eat a burger! You could come up with something smarter than that!” one woman commented on Facebook.

Another wrote: “Why do companies have to stoop to these levels to advertise???. This is a disgrace. Shame on you Burger Urge.”

But activist group Collective Shout, which names and shames “offensive and harmful” marketing and advertising material, has criticised the campaign.

“Hi Burger Urge. This type of exploitative advertising is harmful to society and we would like to invite you to sign our Corporate Social Responsibility Pledge. Please drop us a line to discuss,” the group wrote on Burger Urge’s Facebook page.

Is this the most sexist burger ad you’ve ever seen?

Collective Shout founder Melinda Tankard Reist says that this is just one more example of the “sexist, backward, misogynist advertising” that we are being confronted with every day.

“You wonder if these companies realise it’s the 21st century,” she says.

“We’ve all had enough of this, we’re not buying it, we think women should be treated as women not as objects.”

“The cumulative effect of this sort of sexism creates and contributes to sexist and misogynist attitudes which in turn create sexist behaviour that ultimately hurts women and girls,” she says.