I worked at Honey Birdette for 4 years. There was a time when being a “honey” was my whole life. I was proud and passionate about working somewhere I thought promoted feminism and female empowerment. I even stopped a paramedicine degree to manage my own Honey Birdette store.

But instead of being empowered, I was disrespected, bullied and sexually harassed at work.

Claudia said she and other workers were subject to “sexist standards” and that managers would check female employees’ high heels were high enough and that they were wearing red lipstick. 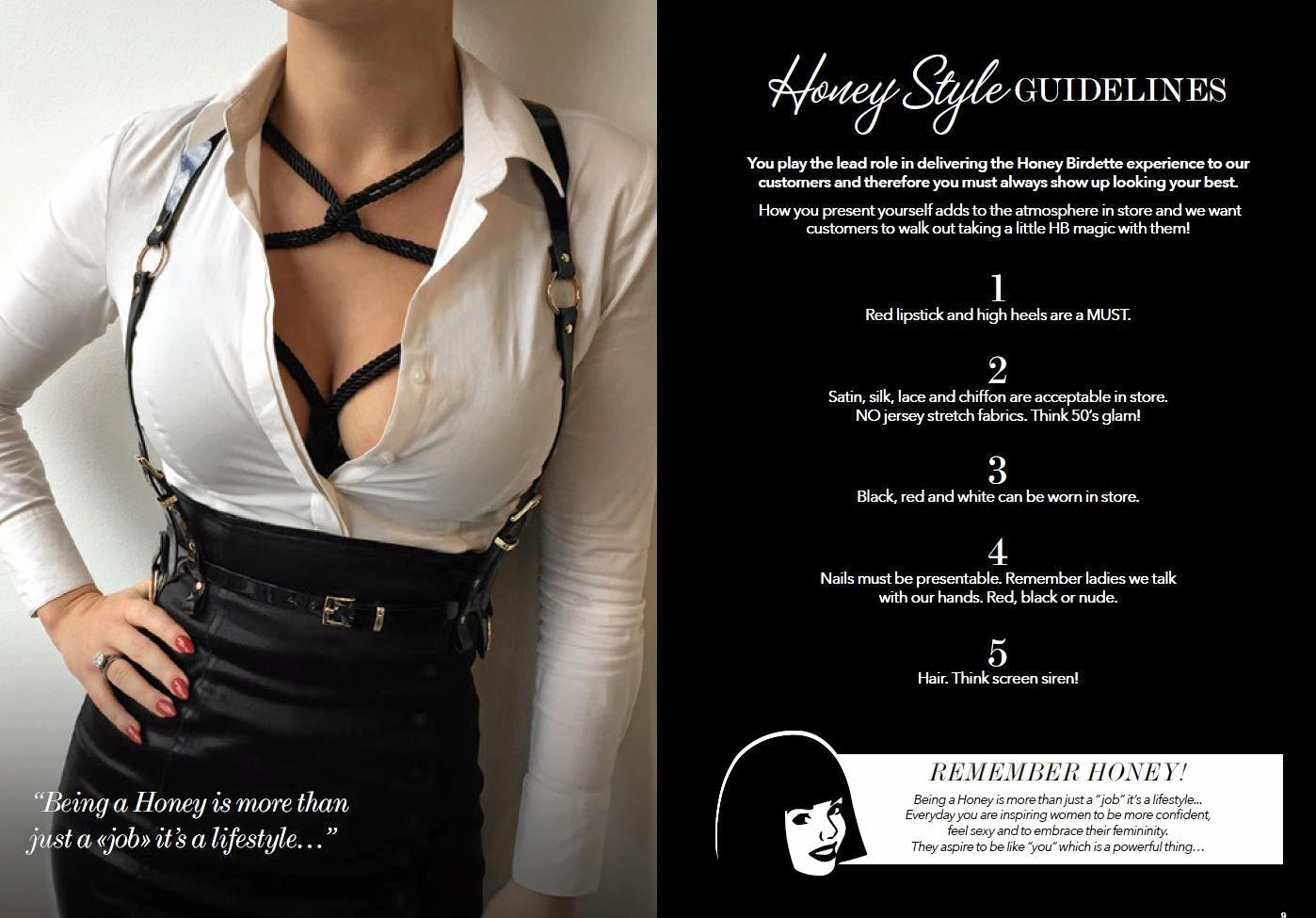 Young female staff were also reportedly instructed to ‘practise one-liners to get customers excited’ and to ‘build a custom fantasy’ to sell sex toys but were offered insufficient training in dealing with male customers who harassed or intimidated them. 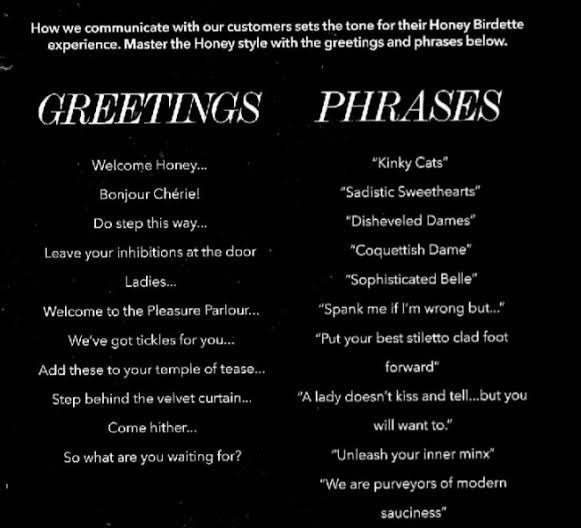 When staff spoke up, Claudia said they were ignored or told to give aggressive customers a customer service contact number.

Honey Birdette knows that what they’re doing is wrong and puts their workers at risk - as we’ve already told them. But as long as their unsafe work practices make them a profit, they’re choosing to ignore us, said Claudia.

The organisation has failed in its duty under the Equal Opportunity Act to prevent and respond to sexual harassment in the workplace.

This is not the first time Honey Birdette employees have alleged a culture of sexual harassment and workplace bullying. In 2015, staff protested the company and launched the #NotYourHoney campaign. WorkSafe found a breach of health and safety laws and issued over a dozen Improvement Notices. These included “No training on how to handle difficult or threatening customers” and “Failure to provide a safe workplace”. 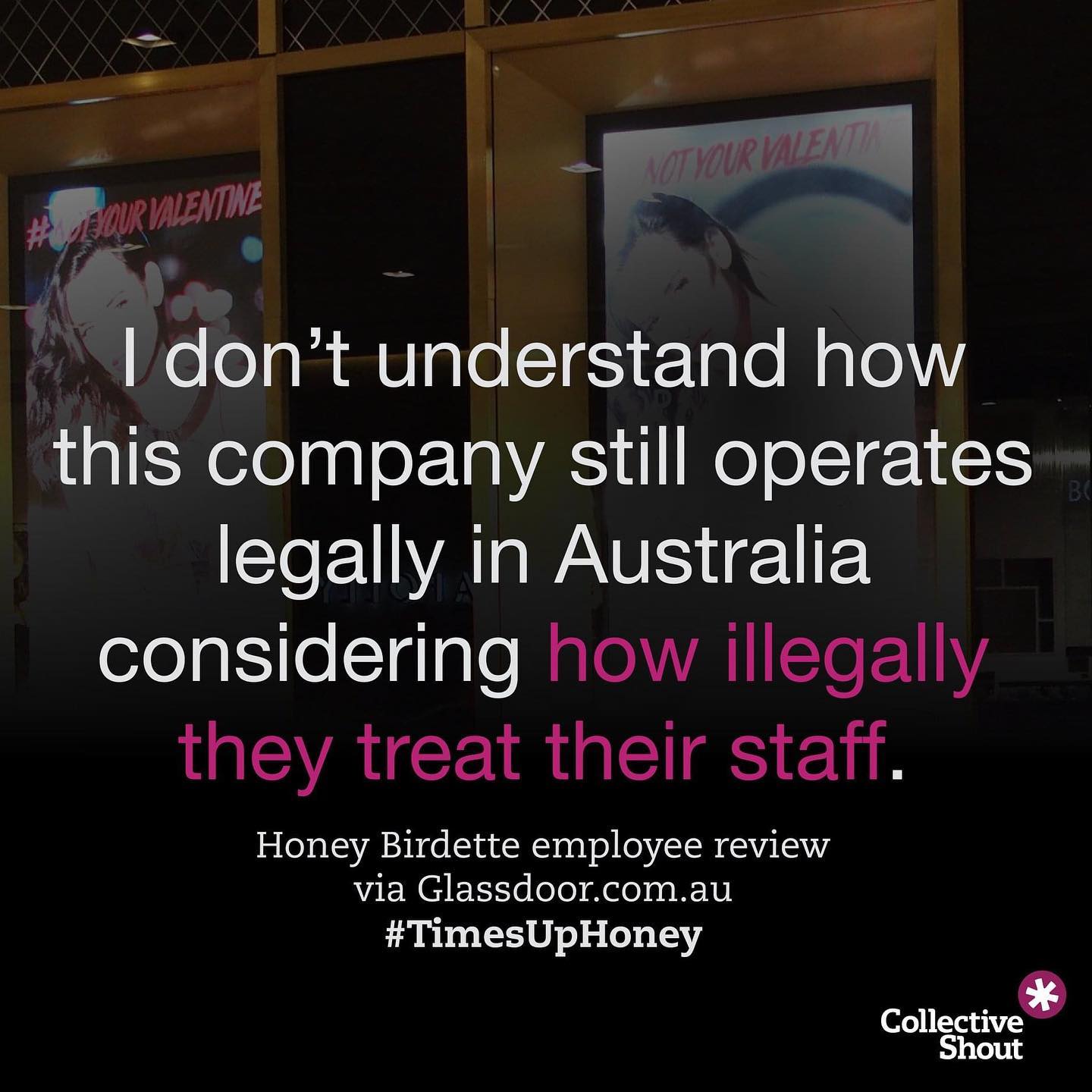 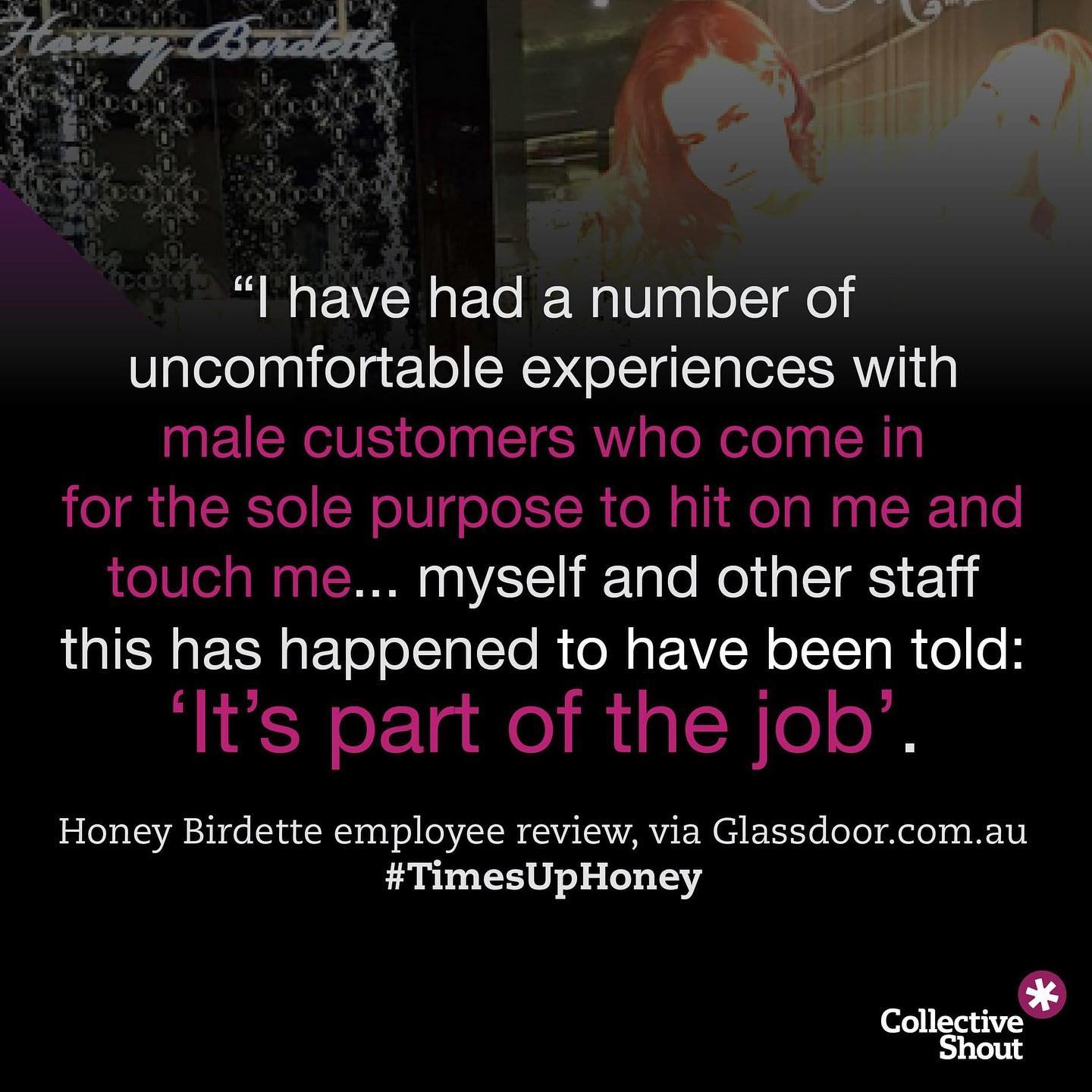 One woman claimed that while was working alone in the store, a common practice, a man entered and threatened to rape her. After calling security and later reporting the incident to her area manager, she was told “you just have to be strong.”

Another former staffer alleged that after reporting being corned and assaulted in the store, company founder Eloise Monaghan told her her experience was “laughable.” 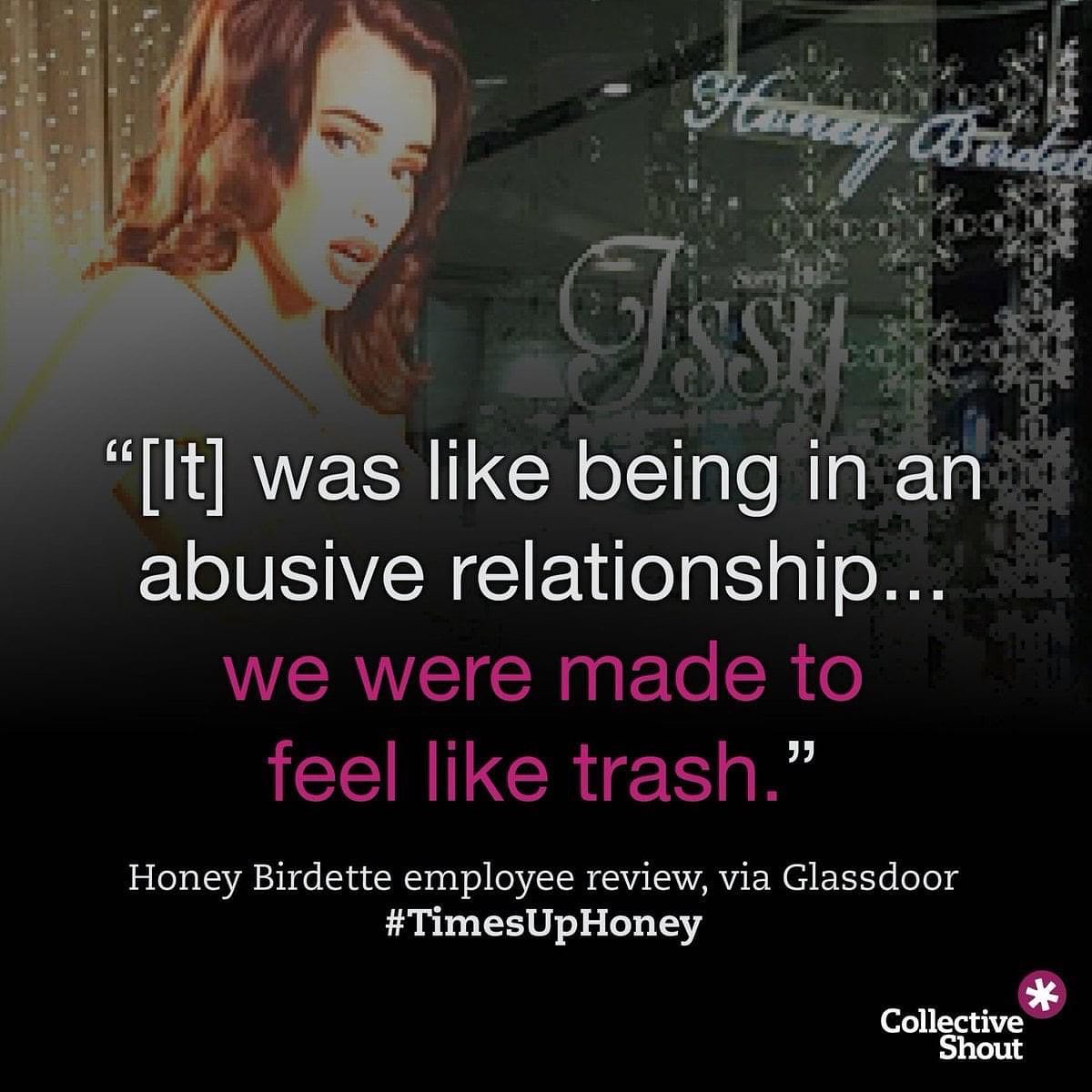 One woman claimed she called the area manager for help after her co-employee had been sexually assaulted while alone in the store and was told to make sure it didn’t affect sales for the rest of the day. Read more.

This is not what “female empowerment” looks like #HoneyBirdetteMeToo 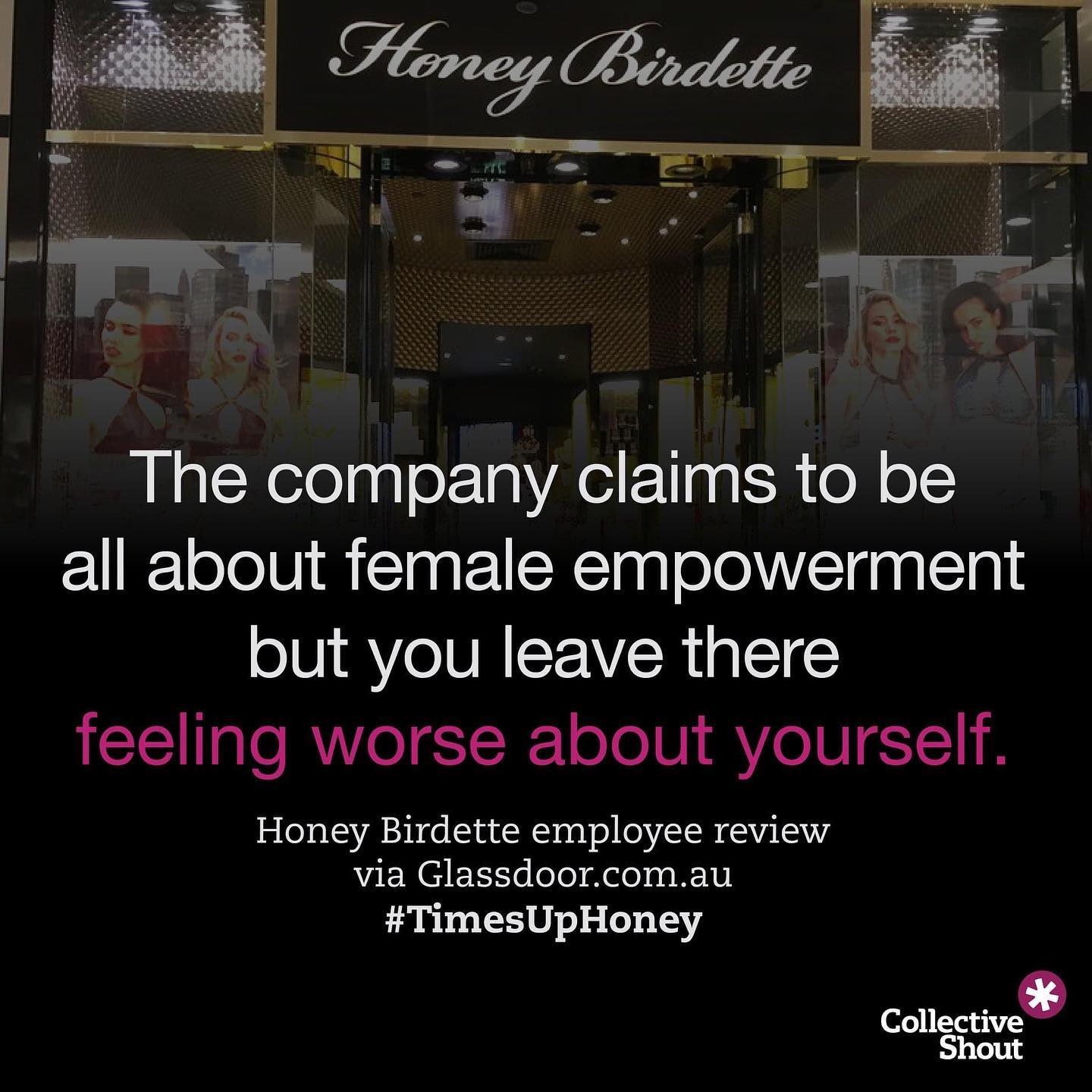