We recently shared an article detailing a mother’s experience with her teenage daughter and an online swimwear company. Here's what happened next.

Tania wrote to Collective Shout after her 16-year-old daughter received a g-string bikini in the mail, a prize for a “last comment wins” competition on Instagram for a company called “Makana Swimwear." The g-string bikini was accompanied by a card which encouraged her daughter to tag herself in any photos she shares on Instagram of herself posing in the swimmers. 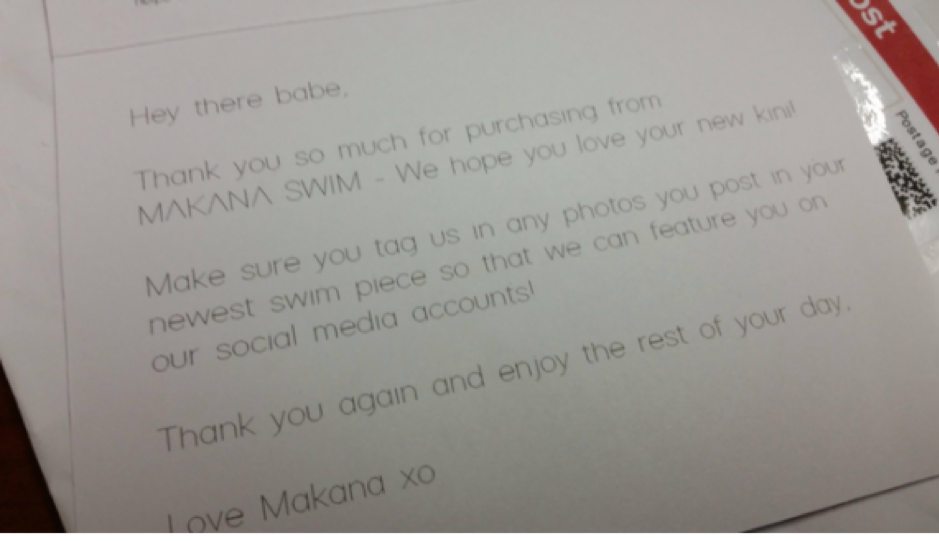 Tania went on to have a difficult but necessary conversation with her daughter about the swimmers and why she could keep the top, but not the bottom. At the same time she was alarmed that anyone would think it appropriate to send this item to her daughter. So she contacted Collective Shout. Read more about what Tania had to say here.

Following publication of our article, we were alerted to a post that appeared in a closed group from someone speaking on behalf of the “Makana team” making a series of factually incorrect claims. 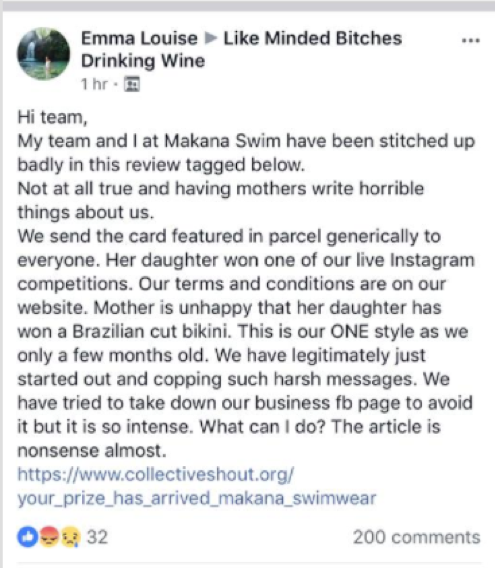 As a result of this post, Collective Shout began receiving comments from hundreds of people defending the business. Almost every comment made the same specific claim, that competition terms and conditions "clearly stated" entry was for over 18+” and therefore it was the 16-year-old girl’s fault for entering against the rules.

Upon visiting Makana Swim’s website, we found a link called ‘competitions’, which included terms and conditions, including a requirement that entrants be aged 18 and over. However, a google cache search found that this section of the website did not exist before March 15, one day earlier. It appears that the owner only published terms and conditions after the mother’s complaint and then edited old Instagram posts to cover her tracks, while making misleading statements that resulted in hundreds of hostile comments blaming a 16-year- old girl for breaking the rules and claiming the mother was unreasonable to complain about the business for her daughter’s actions. 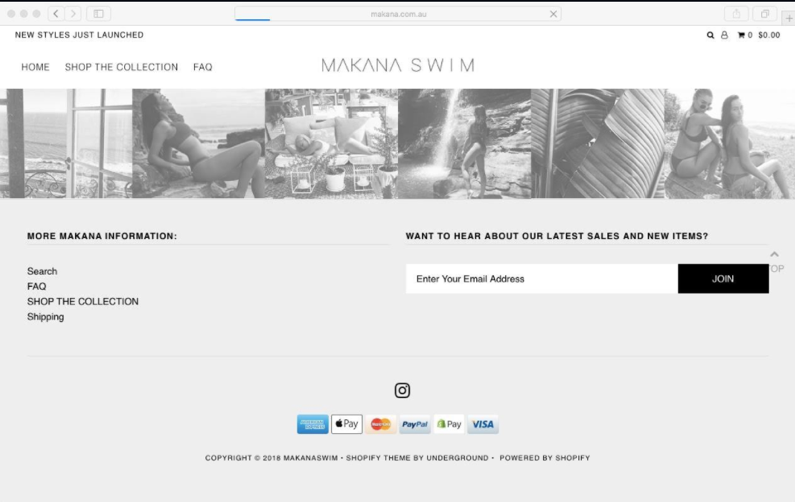 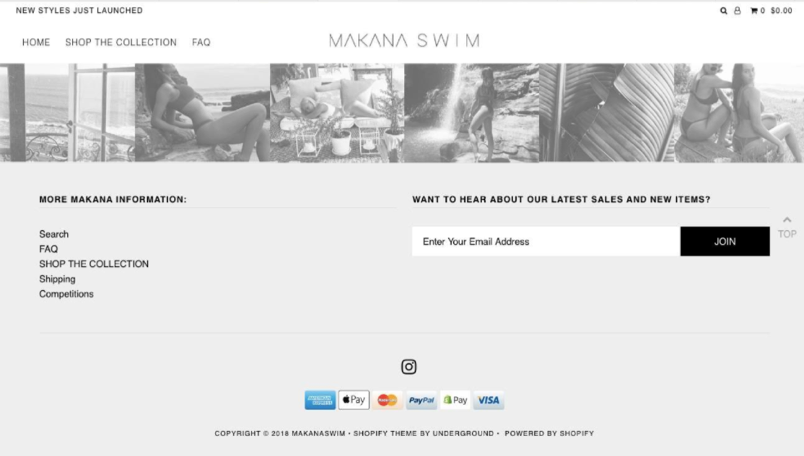 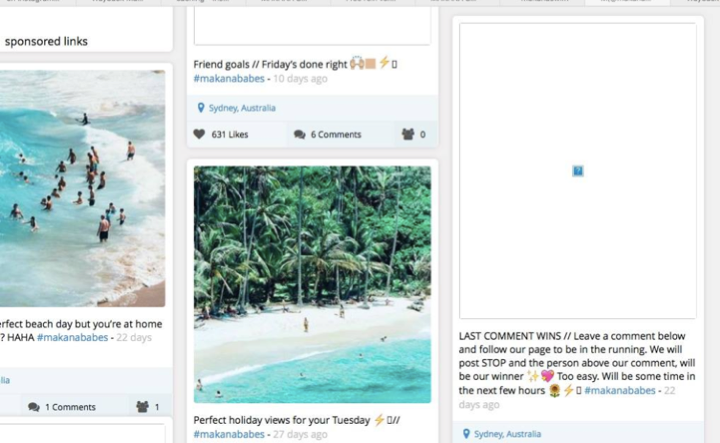 Commenters, many of them adult women have called the 16yr old girl a liar, sneaky and naughty among other things. They’ve claimed the mother is incompetent, inattentive and irresponsible. Both have been mocked mercilessly.

At the time of writing there are over 600 comments on our fb page and volunteers have struggled to keep up with moderating the abuse against the teenage girl, her mother Tania and Collective Shout. We are now receiving messages via our website, which include accusations and threats to disrupt Collective Shout’s operations in various ways. Staff have had to take time out of their weekend to attend an urgent situation as a result of Makana fans making good on these threats.

All because a business didn’t want to cop to making a mistake and instead decided to go with a cover up and portray themselves as the victim.

This is taxing on our volunteers and staff, but our biggest concern is the 16 year old girl who played by the rules presented to her at the time and who according to her mother leaned towards defending the company and yet is still subject to a barrage of nasty abusive comments from adults who should know better.

Hundreds of other adults should know better than to gang up against a teenage girl with such vicious name calling and mockery.

On top of being the most bizarre behaviour Collective Shout has observed for some time, what is also striking is how unnecessary this all is.

How different it could have been if they had posted a statement with something like “thank you for bringing this situation to our attention. We apologise to the mother for this mistake. This was a serious oversight on our part and because of this we are now taking measures to prevent a similar situation occurring again.”

The company has now issued an apology and stated it will close indefinitely. We can’t speak to whether that was a wise or necessary decision to make. We can only hope that if the owner/s do decide to re-establish, that they commit to doing better in future, not only in relation to how they manage ethical age restrictions, but also in how feedback or complaints are managed. 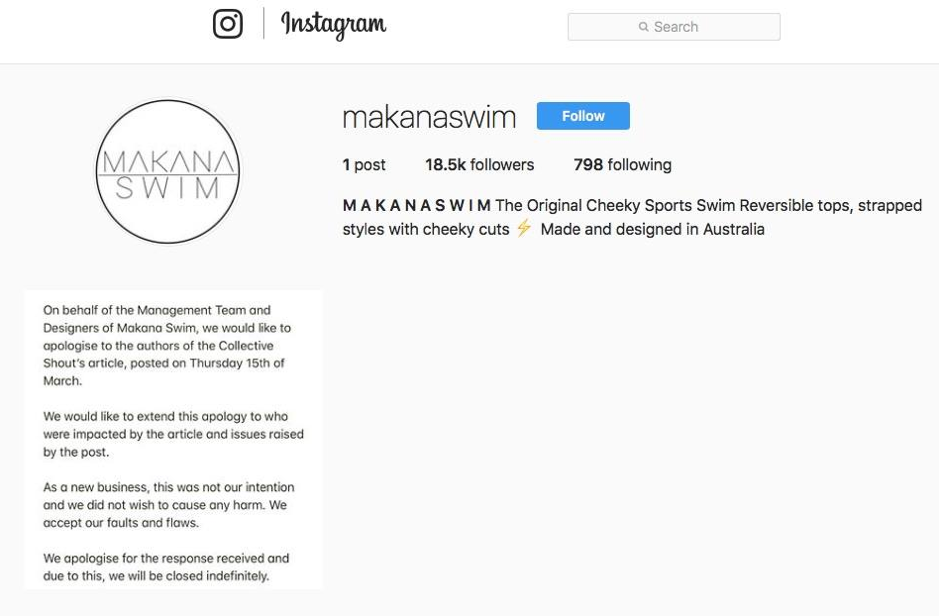