Sexually explicit t-shirts on display at a Fremantle shop are pornographic and should be removed says a local mum.

The mother says she was horrified when she saw the garments at a surf shop in the High Street Mall. Uppermost in her mind was her young daughter's recent rape, as she says the lewd shirts give young men the impression that women are there for the taking.

Easily seen from the mall the shirts show big-breasted women in sexually provocative positions. At the clothing chains Perth shop one depicts a woman straddling a young child's tricycle.

The shop has a range of young kids's clothing but to get to it young children must make their way past the provocative images. 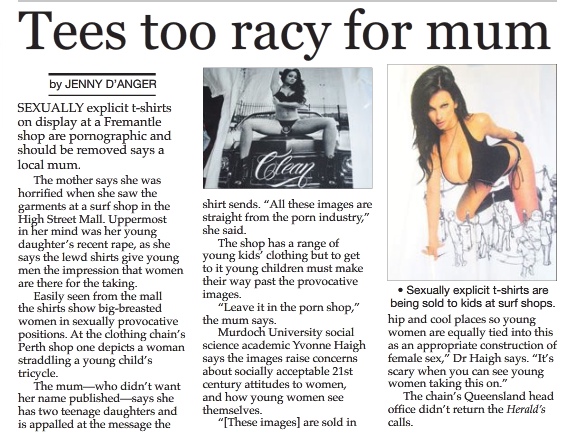 "[These images] are sold in hip and cool places so young women are equally tied into this as an appropriate construction of female sex," Dr Haigh says. "It's scary when you can see young women taking this on."

The porn-shirt trend is something Collective Shout supporters have been challenging for some time. The popularity of these shirts means that images which might have once been restricted to a person's private p*rn collection, are now visible in the public space whenever anyone decides to wear one of these shirts. These shirts are a form of sexual harassment for women and girls.

City Beach is a surf shop chain we've identified as stocking porn-shirt brands. They've just revealed their new season clothing range and it doesn't look like they've lifted their standards. Let them know what you think, contact them here.