What are we teaching boys about women when soccer clubs fundraise like this?

The Para Hills West Soccer Club in Adelaide seems to have missed the memo.

With a new focus on objectification of women, abuse, violence, sexism and misogyny, Para Hills West decides not only to host a ‘Men’s Night’ fundraiser – but advertise it at the club for all the junior boys to see.

Para Hills West is making sure boys learn early about what women are good for. It seems to have ignored amateur soccer’s own code of conduct. 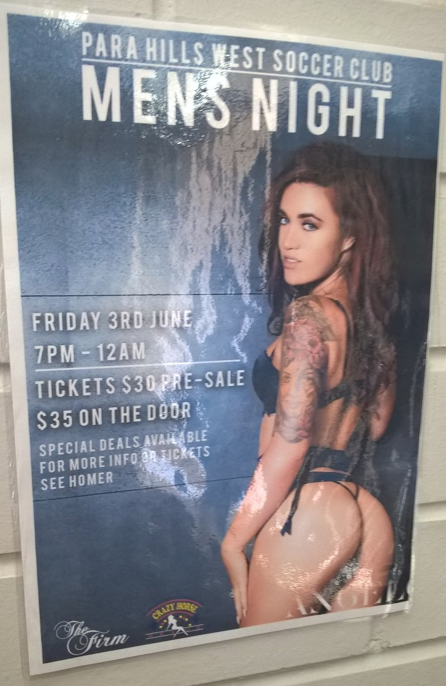 Boys may wonder if their dads and coaches who they look up to, will take up the invite. (it’s just lads banding together to show their support for the club right?)

Not only does its display contribute to a culture that treats women as objects but it also normalises a behaviour that contributes to violence against women.

Sporting clubs have to work hard to turn the tide in sexist attitudes towards women.  The culture of sexism in men’s sport is deeply entrenched. For this reason the AFL players association has partnered with The Line, an initiative under the National Plan to Reduce Violence against Women and their Children 2010 – 2022, delivered by Our Watch to combat sexism and promote respectful relationships.

Our Watch explain in their submission to the Inquiry into Domestic Violence and Gender Inequality that:

“Sexist and stereotypical ideas about masculinity and femininity may increase the probability of violence against women because they… can cast women as targets for exploitation, based on the idea that women are ‘naturally’ passive and submissive, combined with objectified and sexualised identities….”

Make the link, a Gippsland Women’s Health initiative, states on their website that:

“Violence against women is based upon a foundation of unequal power between men and women, something that has been embedded historically in our society and in our relationships. We see this imbalance acted out in many ways, even today. It is in the jokes we tell, the language we use and in the way that men and women are represented in all types of media. ”

Further, studies show that exposure to sexually objectifying images of women can lead both men and women to have a diminished view of women’s competence, morality and humanity. Players and their families down at the Para Hills West Soccer Club are sent the toxic message that women are not whole people.

We no longer subscribe to the old phrase ‘boys will be boys’. Our boys deserve better than that. Schools across the country are rolling out respectful relationship programs to help young people to have healthy, respectful and equitable relationships and address gender based violence. The actions of this club undermine these efforts. 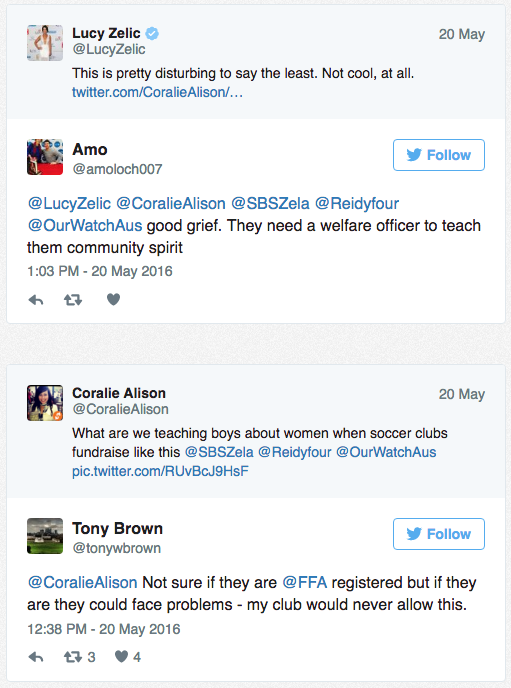 It also makes women and girls feel excluded. What message does this event send to the women and girls involved in the club? We know that hyper-sexualised representations of women in advertising are directly associated with a range of consequences for girls, including higher levels of body dissatisfaction, greater self-objectification, eating disorders, and even self harm. These factors will not lead girls to participate in sport themselves but rather avoid it.

This advertising is in direct breach of the South Australian Amateur Soccer League Inc. Players Code of Conduct which states players must:

"Respect the rights, dignity and worth of every person, regardless of their gender, ability, cultural background or religion"

Women already face sexism in sport. This culture of sexism breeds in clubs that facilitate events such as this. How can we create an environment that is welcoming for all when sexually objectifying posters are plastered around the venue?

10 times women in sport faced god-awful sexism. Just lately.
A not-at-all-depressing highlights reel of the recent sexist garbage endured by women in sport. We only listed 10 because we didn’t want to break your spirit.

The sexualisation and objectification of women is the wallpaper of society, from billboards, to magazines, to music videos. This fundraiser means the club is endorsing this treatment of women. The club has an opportunity now to send a strong message to the community that this type of treatment of women is not okay.

Surely there are alternative avenues for sporting clubs to fundraise in ways that are respectful to all people in the community.  The Para Hills West Soccer Club has a long history. Does the club now want to add sexism to that history?