We were recently alerted to a billboard in Sydney advertising the Foxtel Channel "Studio." The billboard featured an image of a man preparing to have sex with a pig.

We shared information about the billboard on our Facebook page. Supporters began contacting the Advertising Standards Board and Foxtel, calling for the ad to be taken down. 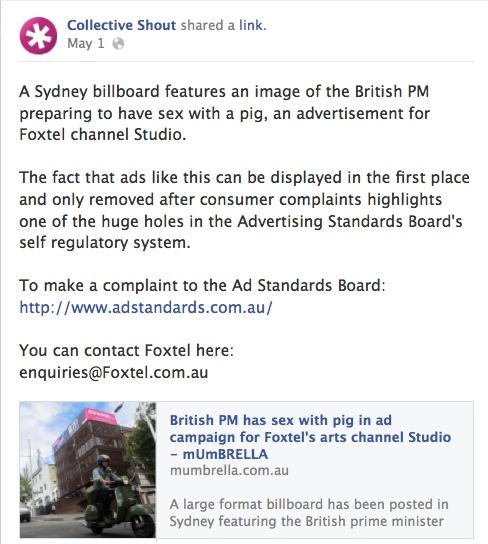 Within 24 hours of speaking out, Foxtel pulled the ad and apologised. In a statement a Foxtel spokesperson said the ad was "appalling taste" and "demonstrates a lapse of judgment."

Foxtel General Manager Chris Keely said Foxtel "did not intend to upset anyone" with the ad.

We're not buying it and neither should you.

Foxtel knew exactly what it was doing when it installed the billboard. Create controversy with an outrageous ad, generate thousands of dollars in free advertising through newspaper articles and talk back radio, then retreat with a disingenuous "apology" which gives even more media attention and free advertising.

"You may love it, you may hate it, but you'll definitely be talking about it."

This is a classic example of how corporates are using ad industry self-regulation to their financial advantage. There are no penalties for breaching the advertising industry code of conduct and no incentives to not repeat the behaviour in future.

Check out our submission to the Inquiry into the regulation of billboard and outdoor advertising to find out why Ad Industry self-regulation has failed and the government needs to step in. Click here.

The billboard being taken down is a great example of community activism. Because you spoke out, we saw change happen. You made a difference! Wouldn't it be great if these billboards didn't go up in the first place?

There is something you can do.

Brisbane residents Pip and Tanya started a petition calling on the Federal Government to act on recommendations from the billboard and outdoor advertising inquiry. (see recommendations here) Hundreds have now signed the petition, but we need this figure to rise into the thousands! Just as you caused the Foxtel billboard to be taken down and this strip club billboard to be removed from outside a school, your name on this petition WILL make a difference. If the Federal Government acts on this petition, advertisers will no longer be able to take advantage of Advertising Industry self-regulation.

[UPDATE] Petitions now need to be received by 24th May. Post petitions to the above address ASAP.

Even if there is only one signature on the petition - yours - it is still worth printing and sending to us. Thanks for taking action!

The Age and SMH forced to pulp supplements over Foxtel Ad