Caitlin Roper, Campaigns Manager spoke to ABC News on adult like poses and styling of girls:

"When girls are young, they all like to put on their mum's heels and somehow always find the red lipstick, that's child-led curiosity," she told ABC News.

"What's disturbing about these photographs is that at some point, someone told this child, 'Lay down on the ground, arch your back, don't smile, look serious and pout'."

Ms Roper also discovered parents approved of the posts, and often boasted about how beautiful their child looked.

"Girls as young as nine don't have the emotional maturity or context to understand the potential implications of sharing these photos publicly and promoting them on social media," Ms Roper said.

ABC News indicated that staff had been able to find identifying information, including schools and addresses, for two of the young models. Caitlin Roper commented further:

"It's really quite risky; it's something [parents] need to be aware of," Ms Roper said.

"It's reckless behaviour that is putting young girls at risk. You can find these girls so easily by tracking them online, their profiles are often public and they give up a lot of information about who they are and where they live. 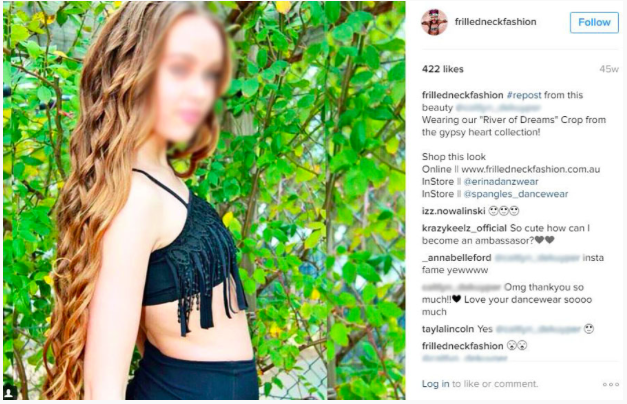 The piece went on:

Ms Roper says if regular photos of "kids being kids" could be sexualised and posted elsewhere, the risk to these young models is "hugely concerning".

"This is a case of adults failing to act in the best interest of the child," she said.

ABC News spoke with parents of some of the young girls featured on Frilledneck Fashion’s social media. Not surprisingly, they were quick to reject any notion of sexualisation, insisting they would not allow their children to be involved in anything of that nature.

The photographers also weighed in, claiming they saw certain poses as ‘cute’ or that they had little say but that they were ‘always mindful’- but apparently not mindful enough.

Jemma Nicoll, the writer and dance teacher who exposed California Kisses’ sexualising dancewear and advertising imagery, has written on the growing sexualisation in the dance industry, going so far as to develop a voluntary Code of Practice in conjunction with educators and psychologists. Speaking to ABC News, she said:

"There's no denying that these children are positioned to have attention clearly drawn to specific body parts — their chest, their crotch.”

"Facial expressions are sultry, and some images even present the illusion of nudity. There is nothing child-like about these pictures."

"My question to parents is: 'Are you seriously this comfortable with the way your daughters are being depicted, and are you aware of the consequences?'" Ms Nicoll said.

"How would these parents feel ... knowing that others may be viewing their child's image on other sites?" Ms Nicoll said.

"I would advise those involved to take far greater care and consideration in their photography and social media moderation, when it is the wellbeing and safety of young girls at stake," Ms Nicoll said.

"Is there surely not another way to style and position a child, for the purpose of a sale?"

We continue to call on Frilledneck Fashion to implement changes to their advertising material, and encourage parents to be aware of the risks of sharing images of this nature in the public domain.

'Pop this': how the dance industry caters to paedophilic fantasies with underage girls