Best & Less to remove bras for toddlers from stores

Last week Collective Shout supporter Deb McNair alerted us to a range of children’s underwear in Best & Less. The underwear sets included knickers with matching crop tops in puppies, kittens and Tinkerbell patterns for girls as young as two. 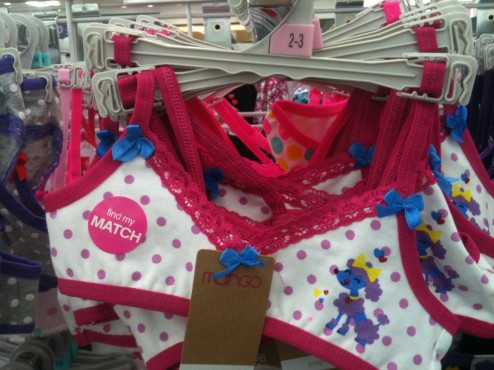 We contacted Best & Less via email as below:

I have come across a range of sets of bras and knickers in your store in size 2-3, for toddlers.

While bras do seem to be manufactured for younger girls these days, with apparent reasoning being that girls are hitting puberty earlier and developing breasts sooner, I don't think there is any argument that this rationale extends to two year olds.

I believe manufacturing bras for little children could contribute to the inappropriate sexualising of them, to making them appear older than they in fact are.  I wonder if you could explain your justification for selling bras for toddlers?

We are pleased to report that we received a swift response from Best & Less Head of Merchandise. Best & Less thanked us for bringing their attention to these clothing items that had gone unnoticed and informed us they would remove them from sale in stores around the country. Best & Less assured us that they have a policy to not sell bra-like products for children under the age of eight.

We are satisfied that Best & Less have listened to our feedback and are taking appropriate actions to rectify the situation. We welcome Best & Less' willingness to act quickly. We would encourage you to contact Best & Less with your thanks.