In yet another display of inconsistent decision-making, the Ad Standards Community Panel has dismissed community complaints against a porn-inspired Honey Birdette ad.

'Belinda’ features a series of close-up, head-to-chest shots of a woman wearing sheer, blue, mesh fabric. Despite the ad consisting of graphic, sexualised imagery, the Community Panel made several unsubstantiated claims to ultimately conclude that the ad treated “sex, sexuality and nudity with sensitivity to the relevant audience” – one that includes kids. 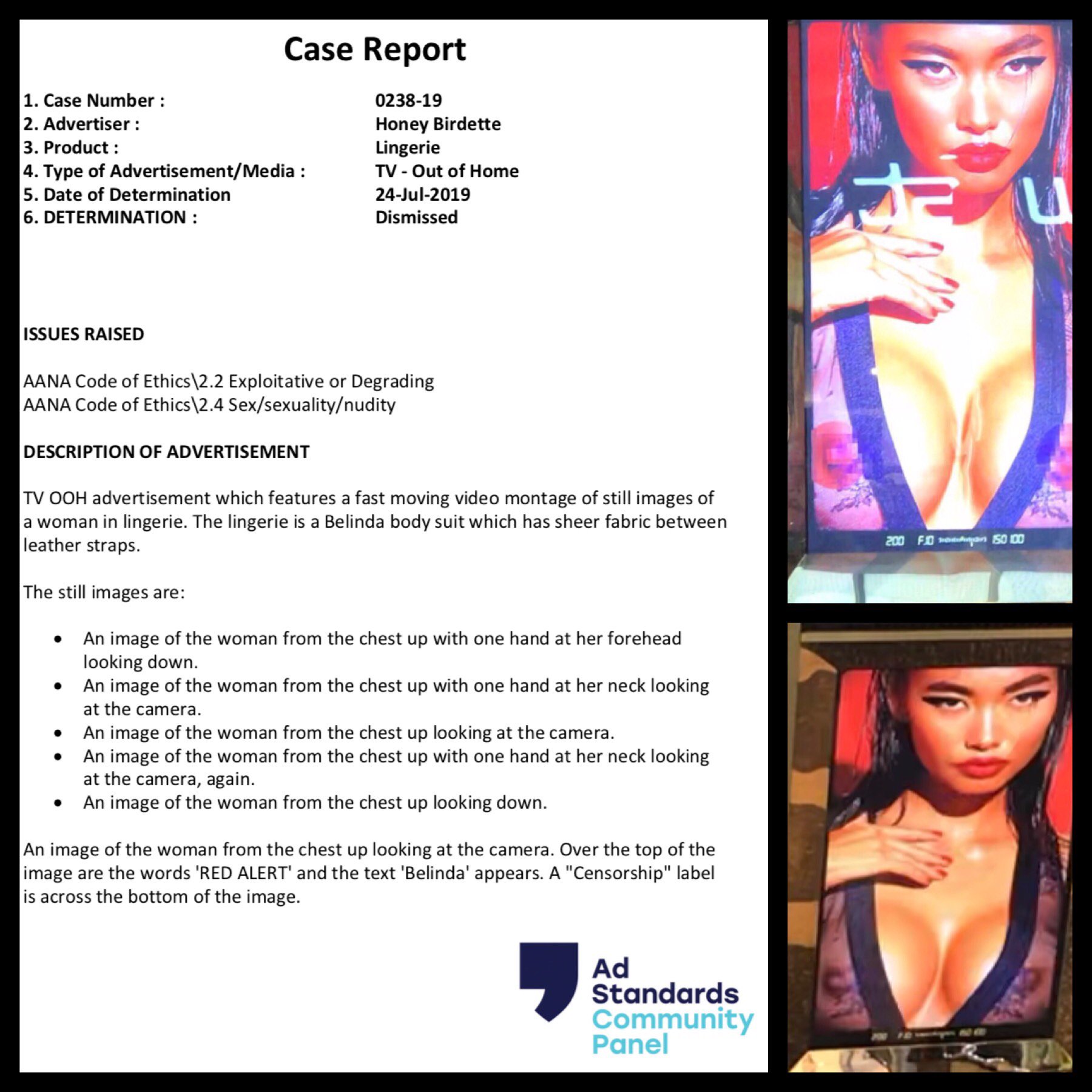 With references to the length of time the images are shown for, the effects “lighting” and “framing” have on the ad, statements about featured body parts being relevant to the product being advertised, and an announcement that “most members of the community would not find the level of nudity in the advertisement confronting or inappropriate in the context of advertising a mesh bodysuit”, the Community Panel gave the green light to this public display of porn-themed imagery to an all-age, non-consenting audience.

Portions of the report state:

The Panel noted the Practice Note for the Code states:

“Images which are not permitted are those which are highly sexually suggestive and inappropriate for the relevant audience. Explicit sexual depictions in marcomms, particularly where the depiction is not relevant to the product or service being advertised, are generally objectionable to the community and will offend Prevailing Community Standards.”

The Panel noted the dictionary definition of sex most relevant to this section of the Code of Ethics is ‘sexual intercourse; sexually stimulating or suggestive behaviour.’ (Macquarie Dictionary 2006).

The Panel considered that the depiction of a woman in revealing lingerie is not of itself a depiction of sexual intercourse, sexual stimulation or suggestive behaviour and that the advertisement as a whole did not contain sex.

The Panel considered whether the advertisement treated the issue of sexuality with sensitivity to the relevant audience.

The Panel noted the definition of sexuality includes ‘sexual character, the physical fact of being either male or female; The state or fact of being heterosexual, homosexual or bisexual; sexual preference or orientation; one’s capacity to experience and express sexual desire; the recognition or emphasising of sexual matters’. The Panel noted that the use of male or female actors in an advertisement is not of itself a depiction of sexuality.

The Panel considered the meaning of ‘sensitive’ and noted that the definition of sensitive in this context can be explained as indicating that ‘if you are sensitive to other people's needs, problems, or feelings, you show understanding and awareness of them.’ (https://www.collinsdictionary.com/dictionary/english/sensitive)

The Panel considered that the requirement to consider whether sexual suggestion is ‘sensitive to the relevant audience’ is a concept requiring them to consider who the relevant audience is and to have an understanding of how they might react to or feel about the advertisement – the concept of how subtle sexual suggestion is or might be is relevant to the Panel considering how children, and other sections of the community, might consider the advertisement.

The Panel noted that this image appears in store windows and considered that the relevant audience includes retail and service workers, people shopping in the Honey Birdette store and people who are not shopping at Honey Birdette but who are walking past the store, and that this last group would be broad and would include children.

The Panel considered the Practice Note for the Code which provides:

“Full frontal nudity and explicit pornographic language is not permitted. Images of genitalia are not acceptable. Images of nipples may be acceptable in advertisements for plastic surgery or art exhibits for example.”

The Panel determined the advertisement did treat sex, sexuality and nudity with sensitivity to the relevant audience and did not breach Section 2.4 of the Code.

Finding that the advertisement did not breach any other section of the Code, the Panel dismissed the complaint.

What do you think? Does this recent Community Panel decision reflect your community’s standards? Tell us in the comments below.