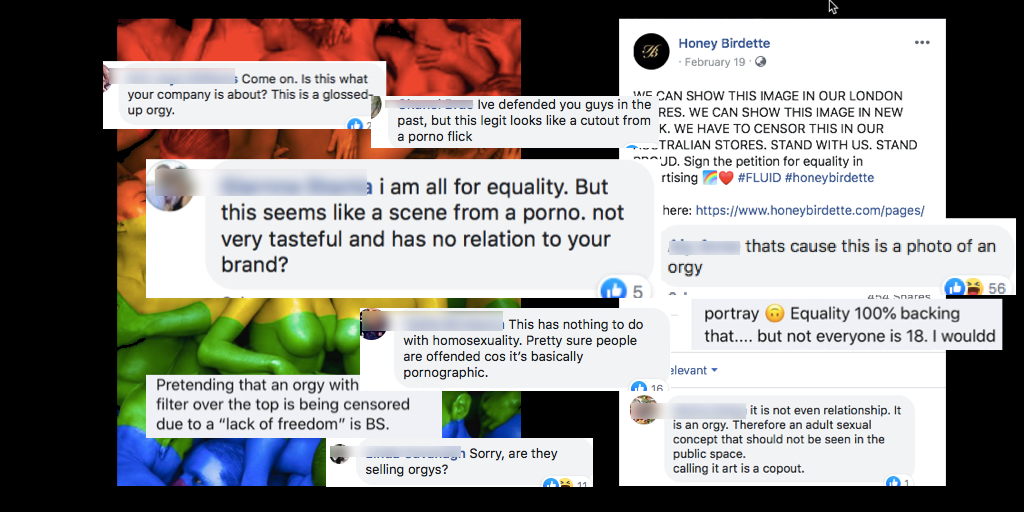 Honey Birdette's latest "Fluid" ad has been slammed after the company posted the image on Facebook and claimed unfair "censorship" had prevented them from using it in their Australian stores. 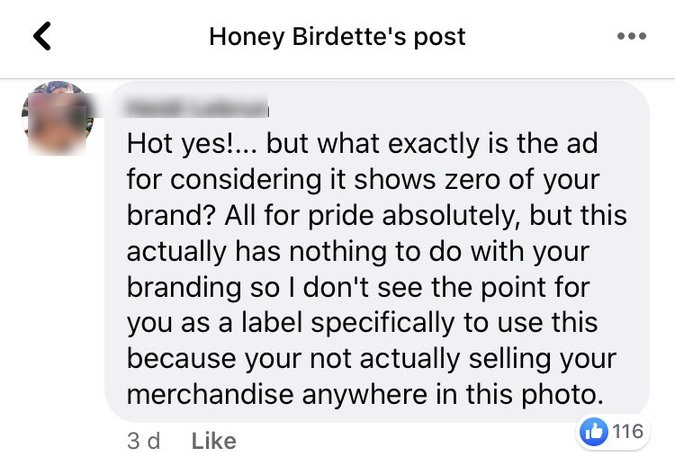 Many comments rubbished the claims of unfair "censorship" saying the company should have expected pushback for broadcasting an image of naked people having sex. Despite Honey Birdette's censorship claims, the ad features prominently on their social media, website, email marketing and shop front windows in full view of those who happen to pass by.

Honey Birdette's Facebook post invited followers to sign an "equality in advertising" petition and to "stand proud." People have been quick to point out that this is a rewrite of an old petition published in June 2019, called "not asking for it." The original petition made no mention of same sex relationships or #LGBTQ+ concerns. Collective Shout has recently been informed by a source close to the company that management had directed staff to boost the petition with fake signatures.

Clicking on the old petition link now redirects to a new URL where the "Fluid" campaign is displayed. 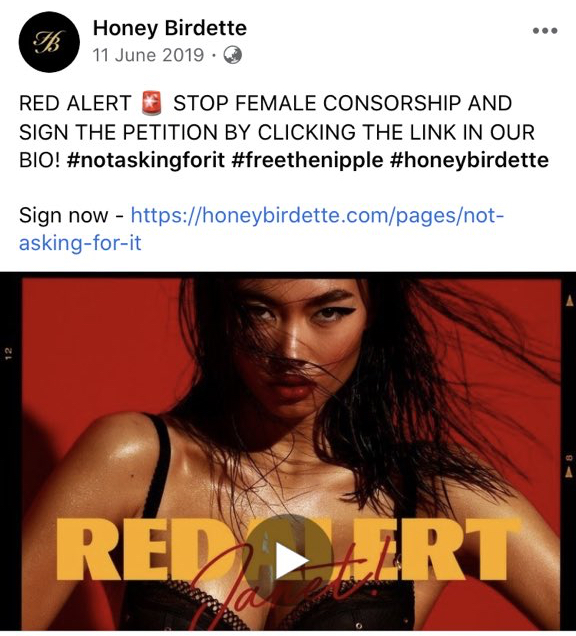 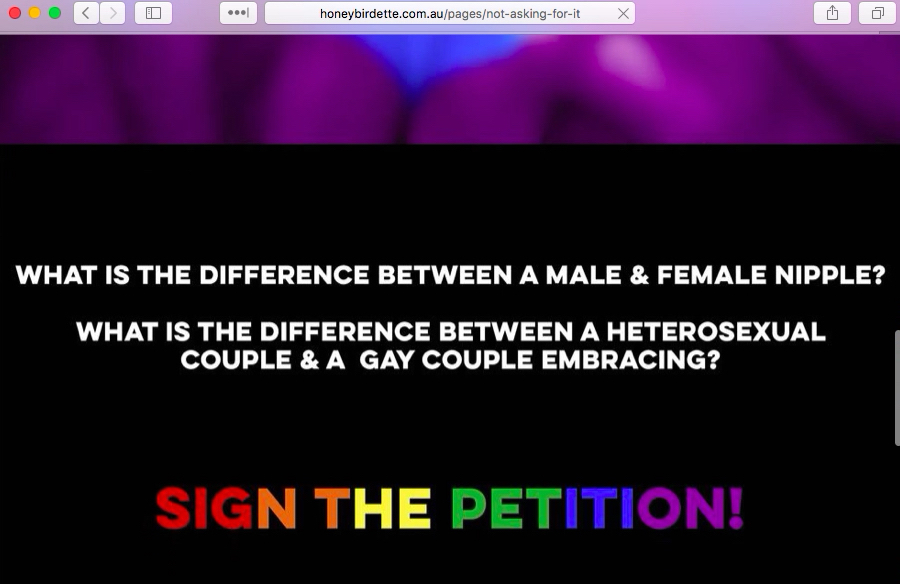 Some expressed doubt about the reason the ad has supposedly been "censored" arguing it was most likely due to the nudity and high sexual content rather than prejudice towards the #LGBTQ+ community. 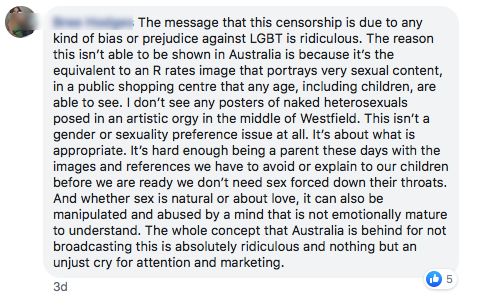 Some members of the #LGBTQ+ community questioned the legitimacy of the petition and called out the company for exploiting sexuality and exposing children to sexual content.

The timing of the ad to coincide with the Sydney Mardi Gras festival while promoting a $200 bondage kit led others to accuse the brand of "queer baiting" and misusing the #LGBTQ+ cause for profit. 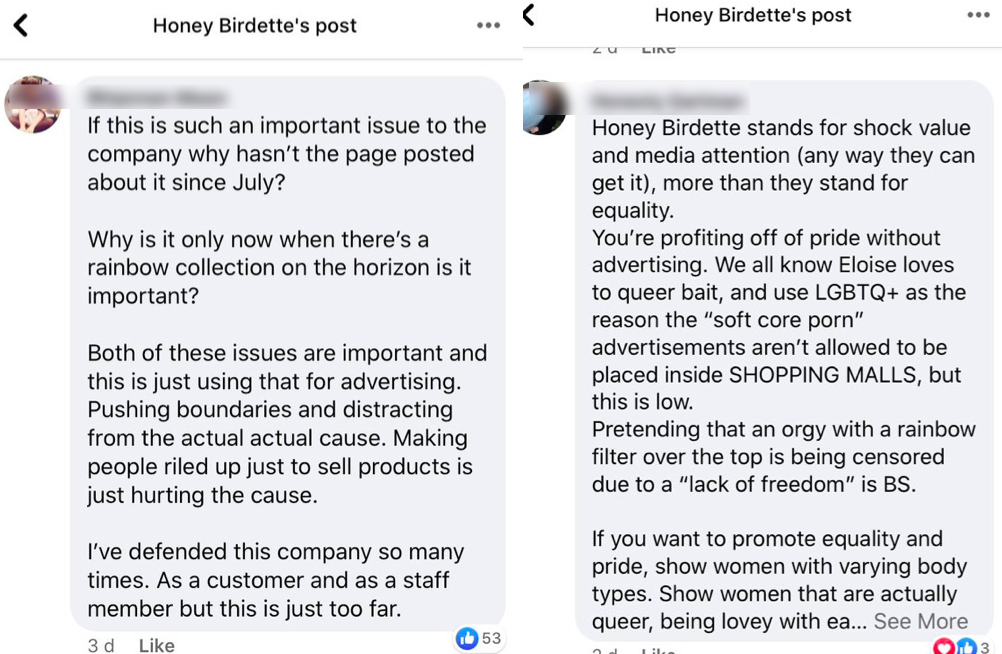 Collective Shout recently revealed that lesbians had spoken out against the ad campaign saying it exploited lesbian sexuality. Lesbian activist Liz Waterhouse said the fact that Honey Birdette's founder and her partner feature in the photoshoot does not excuse selling out lesbian sexuality for profit. In follow up comments to Yahoo News, Ms Waterhouse accused Honey Birdette of "rainbow washing" and "tokenising lesbians."

Honey Birdette has breached the ad industry code of ethics 42 times but has never been compelled to remove or modify their advertising. Because Australia's advertising industry is self-regulated and voluntary, Honey Birdette has been free to advertise how it likes, when it likes and for as long as it likes, with no penalties for non-compliance and no incentive to change.

The only incentive self-regulation has given repeat offenders like Honey Birdette is to continue violating the code of ethics and turn the resulting controversy into a publicity stunt.

Collective Shout has been supporting a petition by a Melbourne father of three calling for shopping centre CEOs to stop allowing Honey Birdette's porn-themed advertising. The petition has attracted almost 77,000 signatures, you can add your name here: