When I was sent a message saying: “fucking waste of flesh worthless female. its girls like u who make guys want to #rape a helpless pussy like u” - Twitter’s “Trust and Safety” unit told me it wasn’t in violation of the rules!

Twitter's threat and abuse reporting system doesn’t work. It’s time Twitter had a zero-tolerance policy to tweeted threats and abuse. This behaviour would have people banned from other public spaces - it’s barely acknowledged as being wrong on twitter.

In June this year, I was subjected to a horrific torrent of abusive tweets, like:  "just shut the fuck up cuz if I see u on the streets I'm gonna snatch u in a alley and force this dick in u". Many included direct threats of rape, and at one point, twitter users tried to publish my address. I was told by police there was no way to stop it other than deleting my account (letting the abusers win), and twitter refused to do anything about it.

I have been motivated to start this in Australia because I saw a UK petition by Caroline Criado-Perez. The momentum from her campaign is beginning to put pressure on Twitter, and I hope an international outcry will get them to act. Twitter have just set up an office in Australia with American staff - and they have said publicly they want to grow quickly here.  Let's make sure they know that as they do this they must show a zero tolerance to threats and abuse.

So many women suffer these attacks when they speak out about issues - and this has to stop.

Twitter is saying they will eventually add a Report Abuse Button to tweets on all platforms - but they need to get rid of their unwieldy forms that are a huge barrier to reporting and when abuse is reported they need to actually ACT and not ignore it. 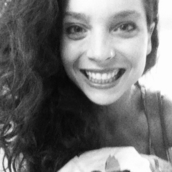 It was during Collective Shout's campaign against US Rapper Tyler the Creator that Talitha was subjected to this onslaught of abuse on Twitter.

Read more about the campaign and Talitha's activism here. Support Talitha's campaign to make Twitter a safer place by signing and sharing the petition widely.