“Australians should be outraged by this offending”

To mark this important week, the Australian Centre to Counter Child Exploitation (ACCCE) hosted its annual child protection stakeholder workshop, online this time due to COVID-19.

Our Movement Director Melinda Tankard Reist was invited to represent Collective Shout at the event which put a spotlight on the magnitude of the global child exploitation problem, and the need for joint efforts to combat it.

The core principle that sits at the heart of what we do at the @AusFedPolice-led ACCCE is #Partnership. Yesterday we had the pleasure of hosting a workshop to collaborate with key prevention stakeholders in #ChildProtection. We are working together to keep children safe. #NCPW20 pic.twitter.com/8lDle5N6Jn

Thanks for the invitation- while child sexual exploitation is a mammoth problem, it was encouraging to learn more of combined efforts to counter it.

The meeting heard that this year, 21,000 child sexual exploitation images had been referred to ACCCE - compared to 14,000 last year. The average number of images seized has skyrocketed. According to the AFP, in the early to mid-2000s, offenders averaged about 1000 images; these days it is 10,000 to 80,000 images and videos.

Double the number of child abuse files have been shared since the start of the COVID-19 pandemic. 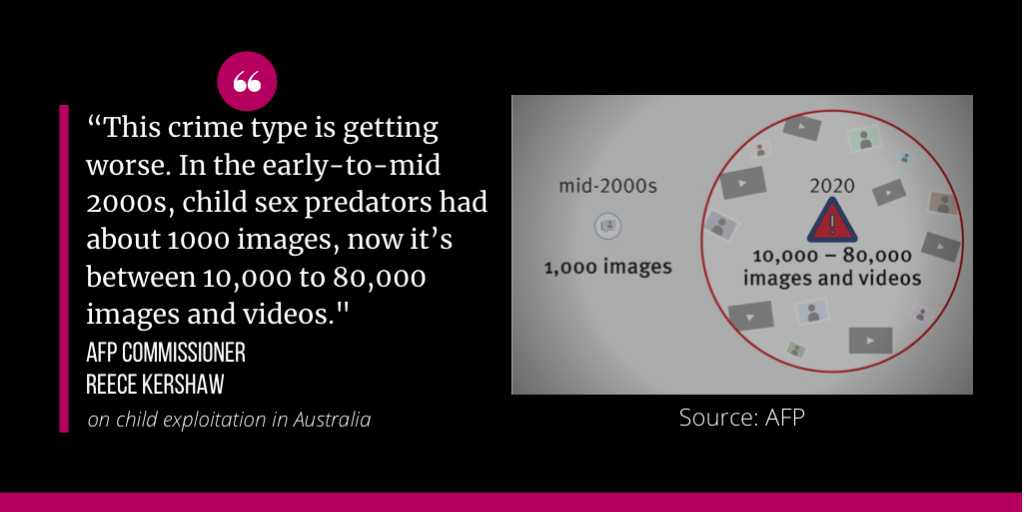 Australian men have been charged for sexually exploiting children - especially in the Philippines, as a result of recent joint AFP Anti-Child Exploitation Team raids.

Since the AFP and partners' creation of the Philippine Internet Crimes Against Children Centre - which tracks down the facilitators of the sexual abuse and removes children from harm - 21 suspects have been charged and 62 children rescued because of referrals via Australian-based investigations. As well, between July 1 last year and June 30 this year, the AFP laid 1214 charges against 161 people, removing 67 Australian children from harm.

“Australians should be outraged by this offending, not only because it is abhorrent but also because recent investigations have revealed that pedophiles who view online child sex abuse material have also been contact offenders — and they are contact offending against children offshore and in Australia,” wrote assistant commissioner Lesa Gale.

Melinda Tankard Reist wrote about pay per view child abuse and rape back in 2017 for the ABC, in a piece titled ‘Pay Per View Torture’ drawing on research by International Justice Mission and Anti-Slavery Australia.

We have also highlighted the shocking practice in a number of submissions including to the Inquiry into the NSW Modern Slavery Act 2018 and Associated Matters.

But as we have also gone to lengths to point out, we can’t address the epidemic of child sex abuse predators without addressing a culture which normalises what we call a ‘paedophilic aesthetic’ - a culture which grooms children for abuse. Recounting the testimony of a convicted child rapist, sociologist and author Dr Gail Dines wrote:

John told me how he had methodically and strategically groomed his ten-year-old stepdaughter into “consenting” to have sex with him, and then casually mentioned that his job was made easy because the “the culture did a lot of the grooming for me.”

Following the sentencing of Daniel Morcombe's killer in 2014, MTR wrote about the dark world of paedophilia, urging the need to address the broader culture which aids it:

In 10 years of campaigning against corporates which profit from the sexualisation of children in their products, services, marketing and advertising we have repeatedly highlighted the need to prioritise children’s rights, safety and wellbeing over vested interests.

When corporates fail to prioritise child safety, they become complicit in child exploitation. 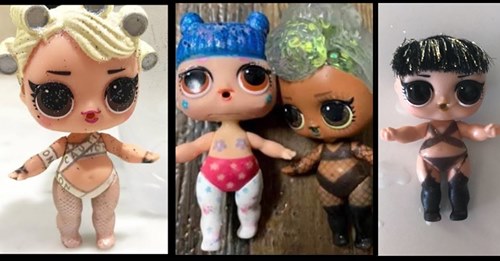 As you know we recently had a success in a campaign targeting retailers K-mart, Big W and Target for selling sexualised LOL Surprise dolls dressed in hidden bondage-wear and lingerie. We said that girls deserve better than toys inspired by adult fetish.

We also got child sex abuse dolls - replica, life-like children, toddlers and babies - removed from the Wish shopping app and more recently, the platforms of e-commerce giant Alibaba. We are working with Alibaba to make sure these products do not return to their sites.

For almost a year we’ve been part of a joint international campaign asking Facebook to fix its child predator and child exploitation problems which include live-streamed child abuse and grooming on Instagram. 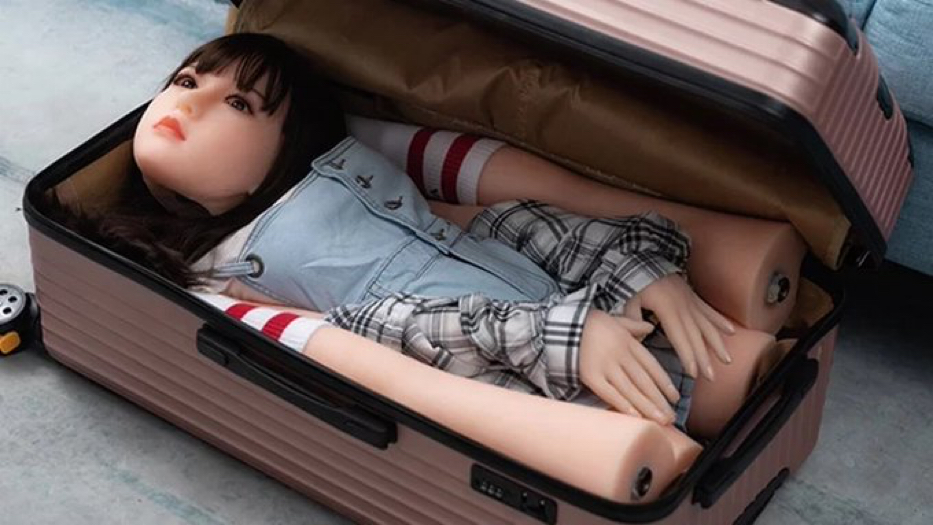 We have also, as supporters know, exposed the pornification of culture more broadly, which puts young people at risk through harmful and limited ideas about their bodies and teaching them to adopt pornified roles and behaviours. Boys are being socialised into a sense of entitlement, destroying their empathy and contributing to increased sexual harassment and even assault.

‘Barely Legal’ pornography featuring teens with pigtails, flat chests and braces can be purchased in newsagents and petrol stations. G-strings, padded bras and bikini tops, and underwear with sexually suggestive slogans are marketed to pre-teen girls.

The corporate world is failing kids and contributing to a culture where children are not valued or safe. But as the National Association for Prevention of Child abuse and Neglect (NAPCAN) - founders of National Child Protection Week - says, we all have a part to play in keeping kids safe. 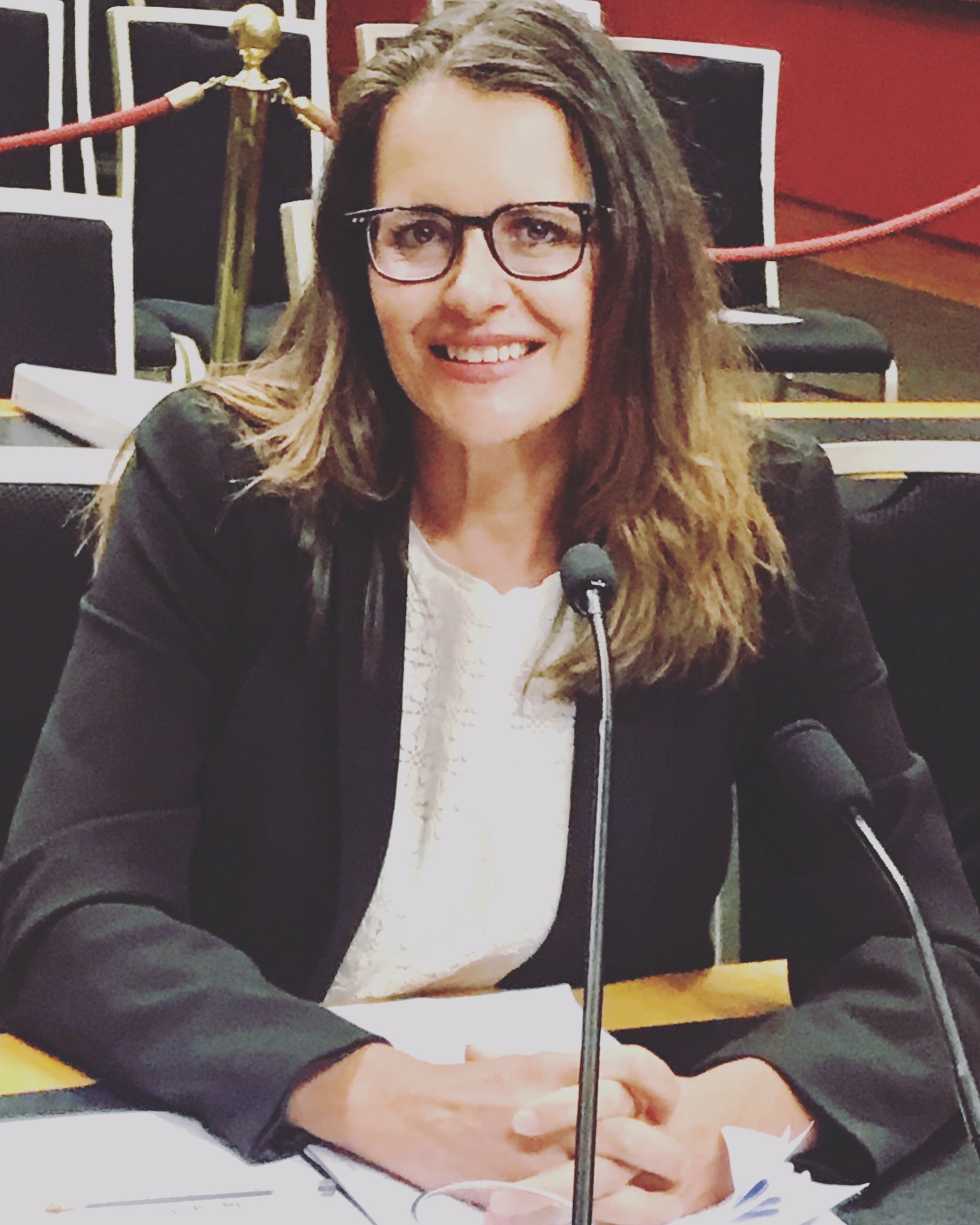 Explosion of online child abuse shames Australia, but we must talk about it

“Better a robot than a real child”: The spurious logic used to justify child sex dolls

The dark world of paedophilia exposed