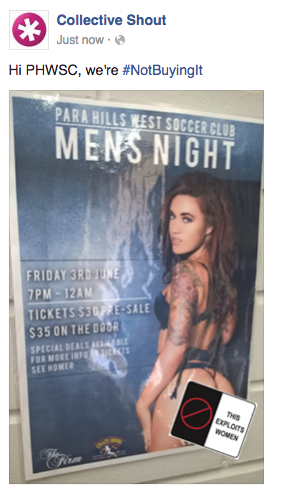 This is very similar to the all too common refrain “I’m a woman and I don’t see the problem”. This is beside the point. Both men and women can hold sexist attitudes and participate in exploitation of women- as evidenced here.

What is the message to young people- to boys about what women and girls are for? Being a club fundraiser, this treatment of women is effectively being condoned by the club, suggesting objectifying women is normal and acceptable behavior.

We already have a culture of sexism in men’s sport- one that various sporting leagues are working hard to eradicate. Given this, it's difficult to see how Para Hills West could have felt recruiting strippers was appropriate.

It is true that the sexualisation and objectification of women is prolific in media, advertising and popular culture, and we campaign against these things every day. This saturation of such imagery is precisely why it is so harmful- because women and girls are routinely objectified and demeaned, their bodies used to sell products. It has become so normalised and accepted that many people can no longer recognise it when it is happening- like right now.

Research indicates the objectification of women is at the roots of many forms of gendered oppression, such as sexual harassment, abuse, discrimination and violence against women. It reinforces women’s status as second-class citizens rather than intelligent, valued people with something real to contribute to the world and as such, undermines gender equality.

The fact that other forms of media similarly objectify and exploit women does not make it okay to do so here.

3) “You see more skin at the beach/swimming pool”

The issue is not about the amount of skin shown, or an aversion to women's bodies. Context matters, and when the context is women's bodies being commodified for the benefit of men, this is an important distinction to be made.

There is a big difference between men and women wearing swimwear to the beach and men paying to participate in the commercial sexual exploitation of women in the stripping industry.

It’s staggering that this could actually be considered a defense, but we will address it anyway.  Newsflash: There are many ways to raise funds that do not require the exploitation of women. It is possible to raise money without promoting the sex industry, an industry founded on the abuse and exploitation of women. It is concerning that this kind of event could be used to justify and reinforce men’s sexist attitudes and entitlements to use women’s bodies.

‘Keeping costs to players down’ is not an acceptable excuse for men to participate in the commercial sexual exploitation of women, however convenient this may be. This is true also for the extremely misguided notion that men who pay for sexual services are helping strippers to put food on the table. It is incredibly disingenuous to pretend that men paying for sexual services is somehow a selfless, even charitable pursuit, that it is done out of concern for the livelihood of women involved and not for the sexual gratification of men.

Men who pay for sexual services do not respect women. It’s that simple.

Surely there are other ways of fundraising than recruiting strippers. May we suggest a lamington drive instead?

The issue here is not offence- it is about actual harm to women and girls. Framing this issue as ‘people being offended’ (rather than criticism over men paying for sexual services as a fundraiser) is a deliberate obfuscation intended to deflect attention and responsibility away from men participating in the exploitation of women.

The belief that the bodies of women and girls can be purchased for men’s sexual use, or that women and girls exist to please men sexually harms all women- and these beliefs about women are reinforced when a so called ‘family’ sporting club condones this treatment of women through promoting strip clubs.

To say “if you don’t like it, don’t participate - simple!” – Yes, that is a very simple statement, but it is a completely ineffective response to sexual exploitation of women in our culture.

We and other women and girls are harmed by this toxic culture, even if we have never personally visited a strip club or worked in the sex industry.

The normalisation of sexual exploitation of women as entertainment harms all women, not just those who say they choose to participate. “Don’t like it, don’t watch it” makes as much sense as saying “don’t like pollution, don’t breathe.”

7) “But what about Ladies night, with male strippers?”

We do not support ‘equal opportunity’ objectification. We’ve spoken out on various occasions, condemning the sexual objectification of men to sell products and services.

However, while men can be sexually objectified, there are different power dynamics at play. When men are sexualised they are depicted as strong and powerful, whereas women tend to be depicted as sexually subordinate and submissive. Also, this treatment of women is routine and ongoing. Read more here.

Research indicates that the objectification of women, as well as sexist attitudes and rigid gender stereotypes contribute to a culture where male violence against women is rife. Domestic violence is at epidemic proportions in Australia, with 1-2 women being murdered each week, often by current or ex-partners. It is astounding that given community wide efforts at prevention and education, that sporting clubs would still think it appropriate to reduce women to sexual objects for men’s use.

This is certainly debatable. The sex industry is founded on the suffering and exploitation of vulnerable and impoverished women. The majority of women in the sex industry entered as children and do so with a lack of other viable choices. Research found that nine out of ten women surveyed wanted to exit the sex industry but had no other options available to them.

Regardless, this is not about whether or not women choose to be reduced to sex objects - this is about men making choices to pay for sexual services, all the while convincing themselves that the women love it and made a choice to do so. It is reckless and a disgrace that this club would organise and subsequently defend an event that contributes to the ongoing abuse of women in the sex industry.

Those lessons do start at home, such as when a father decides to visit a strip club and justifies it as a 'fundraiser.'

Men who hold sexist attitudes, objectify women and pay for sexual services do not respect women. What is the message to children when fathers, coaches and other men in their lives treat women as objects of recreation? What do children learn about how men behave, and what women are for when the men they look up to model such behavior?

That purchasing sexual services or participating in a system of exploitation of women is regarded as 'just a bit of fun' by some indicates just how deeply entrenched sexist attitudes and an entitlement to women's bodies can be. It suggests that men's sexual enjoyment is more important than women's rights to dignity and respect- and why is the degradation and humiliation of women considered to be fun or entertainment for men?

"In a US study, women in strip clubs frequently reported being ‘spat on’ and ‘sprayed with beer’, they report having cigarettes flicked atthem as well as trash, condoms, golf balls and even dead animals (Holsopple, 1998). Men reportedly ‘pull…women’s hair’, ‘yank…them by the arms and ankles, rip… their costumes and attempt…to pull their clothes off’. Women are ‘bitten, licked, slapped, punched, and pinched’ whilst male buyers attempt to penetrate them vaginally and anally with ‘fingers, dollar bills, and bottles’, according to the testimony of Kelly Holsopple who worked in a strip club for a number of years, and then went back to research the venues (Holsopple, 1998). In her research she found that 100 per cent of strippers she interviewed reported being abused within the clubs. Holsopple’s research is highly relevant to the Australian context where dancers face violence not only from their male ‘customers’, but also from club owners." See report here.

This is not harmless fun- this only serves to uphold men's interests of sexual access to women on demand.

What are we teaching young boys about women when soccer clubs fundraise like this?

The truth about life as a lap dancer- The Guardian