KFC is eroding behavioural expectations and undermining what it means to be an active member of a decent, civilised society, and this is the hill I will die on.

So far, its ‘Did someone say KFC?’ campaign’s catchphrase has been a get-out-of-jail card for parents whose kid has walked in on them ‘naked wrestling’ and, more recently, starring a pouty, buxom ‘girl on her way to a music festival’ who ‘adjusts her outfit’ to a car containing ‘a mother and two boys in soccer gear’.

The latter vanilla ‘descriptions’ come from the advertiser themselves and are featured in the 11-page Case Report recently handed down by the Ad Standards Community Panel. However, those same things are described by members of the viewing public as “breasts being shaken and boys ogling her” and “depicts a hooker trying to lure…a mum with kids”.

In the face of what was clearly a significant public outcry over its summer zinger ad – for which KFC duly “apologised to anyone who was offended” – the fast food giant hasn’t just played a straight bat, they’ve denied the very existence of all bat-related sport.

Founder of Suits & Sneakers, Anne Miles, agreed with Collective Shout, telling CMO the ad shows a real lack of understanding of their audience.

“Where was FreeTV’s CAD in this too? How can not one person put their hand up and say this isn’t good for society, first up? Most of all, though, this shows lack in real understanding about who actually buys this product and that is appalling for our industry."

Brands are expected by the consumer to now stand for positive change or at least to be doing their part in stopping harmful stereotypes in society or doing less harm to our planet and the people on it, Miles continued.

"What’s worst about this is that it seems a deliberate strategy to gain attention; or for someone in the approval chain to make a quick buck at the expense of this brand," she said. “KFC and its agency need to step in time with the modern customer and modern creativity too. There are no shortage of innovative creative ideas out here, and absolutely no need to resort to these brand and customer damaging tactics to get noticed."

"The problems here are that we're talking about pre-teens, and that there's no indication whatsoever in the ad that what they're doing is wrong.

Just look at this still: 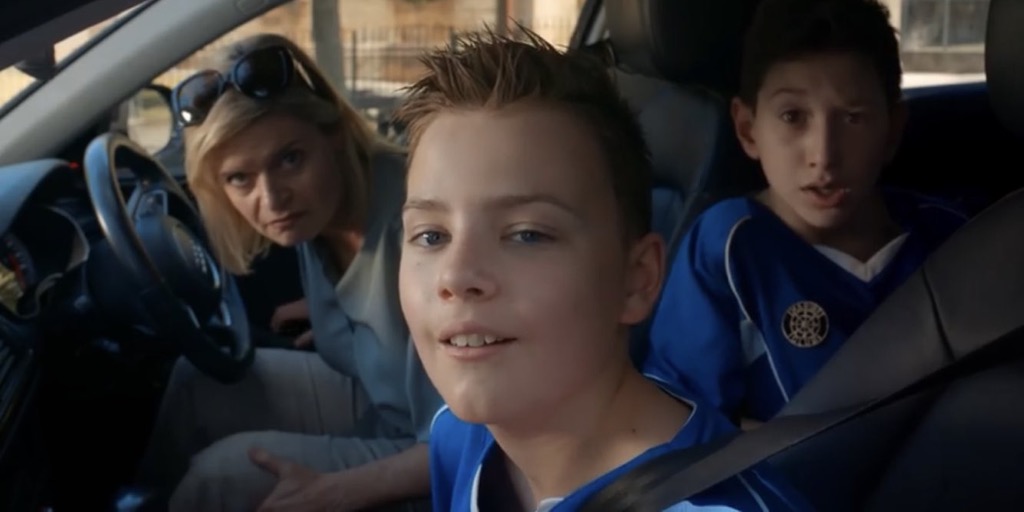 And then try to take in what Liszewski is arguing:

Ads like this reinforce the false idea that we can't expect better from boys.

Yes, that's the crux of it. While it's true that hetero teens and men are going to be attracted to curvy women, that's not the issue here. The issue here is a brand choosing to condone the idea that's it's natural and OK to leer, if not drool. As Liszewski points out, research shows that attitudes shape behaviour, and therefore this kind of advertising contributes to "a lesser view of women, resulting in their mistreatment".

Marketing experts Lauren Gurrieri from RMIT University, Mandy McKenzie from the University of Melbourne and Megan Bugden from La Trobe University suggest objectification in advertising is a trope as old as time.

“Our research suggests the advertising industry’s standards for judging sexism are, like the world depicted in the television series Mad Men, stuck in the past,” they said.

“One of the biggest problems is the (advertising industry’s ethical) code only considers ads in isolation. It doesn’t take into account their cumulative effect.”

We've spent years dealing with Ad Standards, and in this time, we've seen the many flaws in the system- one we argue needs a complete upheaval. Of course, the industry likes things exactly the way they are. As the Australia Institute said in the Letting Children Be Children report:

"… advertisers also have an interest in avoiding government scrutiny that may lead to stronger regulation of advertising in the interests of the general public…Self-regulation is a strategy that enables the industry to avoid such scrutiny."