Posted by Coralie Alison 24040sc on

When will changes be made to the failed advertising self regulation system?

In December last year Honey Birdette released a series of posters for display in their shop windows around the country. Consumers lodged their complaints with the Advertising Standards Board who eventually determined that two of the four posters did in fact breach the code of ethics.

Honey Birdette have repeatedly breached the code of ethics. But there are no penalties for repeat offenders. And by the time the ASB made their determination in January, the posters had already been up for weeks, and had since been replaced by the next months promotional signage.

How many children were exposed to these harmful images in the meantime? Why must families doing their weekly grocery shop continually be exposed to hyper-sexualised content against their will?

We've outlined 25 flaws to the current self regulatory system here.

Contact your MP regarding the flaws in the current system.

A sample of the complaints about the December posters included:

"This image showed the woman's nipples. I contacted Westfield management with no reply. I find it highly inappropriate to be shopping for Christmas presents with my children and for them to see an oversized print of a women with a see through bra on showing her nipples. How is this appropriate for a shopping centre?"

"Women are sick of being objectified. Women who shop in the centres in the lead up to Christmas should not be subjected to men's provoked thinking about taking off their clothes. Children who are thinking about unwrapping presents will be drawn to the wording and be disturbed or sexualised in their thinking."

"There are two very large posters of women wearing see through bras prominently displayed in the shop window. I can see the woman's nipples. This is pornography, accessible and on display in a place frequented by minors."

"Nipples are seen through the bra."

In their determination the board said:

The Board noted version 1 of the advertisement which features a woman wearing a nude bra with black detailing and flowers. The Board noted that the lingerie in this image is sheer and the whole of the woman’s breasts, as well as her nipples, are clearly outlined.

The Board noted the Practice Note to Section 2.4 of the Code which provides: “Full frontal nudity…is not permitted…Images of nipples may be acceptable in advertisements for plastic surgery or art exhibits…” The Board noted that while nipples may be acceptable in some circumstances, depending on the overall impact and relevant audience, the Board considered that in the context of a lingerie advertisement in a store window a depiction of nipples is not appropriate and does not meet the provisions of the Code.

The Board noted that the woman’s briefs are also sheer with black detailing and considered that the overall impression is that there is a high level of flesh on display. The Board noted that it is reasonable for an advertiser to display the products they sell in their advertising but considered that in this instance the eye is drawn to the woman’s breasts and the style of lingerie is more risqué that than the usual style of lingerie advertised in store windows.

The Board considered that this image of a woman in lingerie with her nipples visible through the bra and the full outline of the breasts highlighted by the detailing on the bra is not an appropriate image for a broad audience of a shopping mall which would include children. The Board considered that this version of the advertisement did not treat the issue of sex, sexuality and nudity with sensitivity to the relevant broad audience. 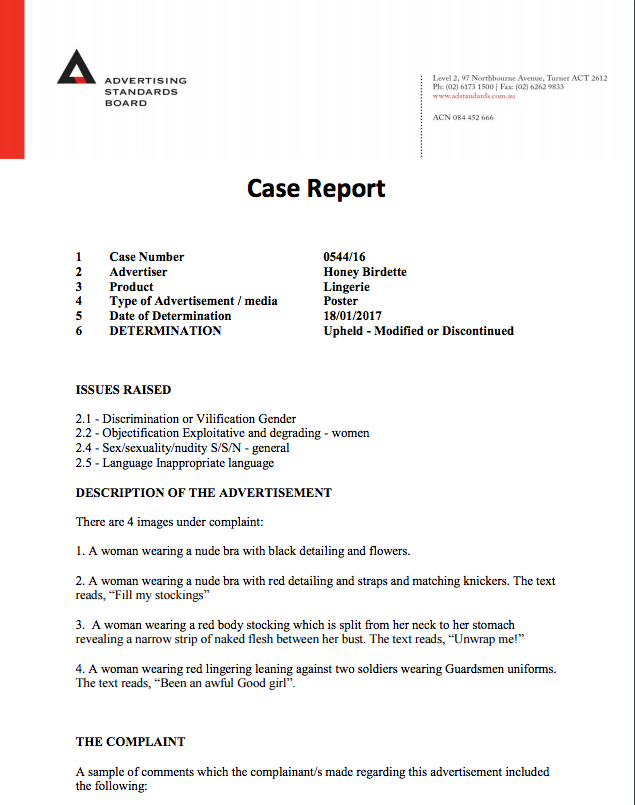