No Rivers, we're not excited about objectification

Tell Rivers what you think of their new approach to advertising

We have received several emails from Collective Shout supporters about the latest Rivers Catalogue. 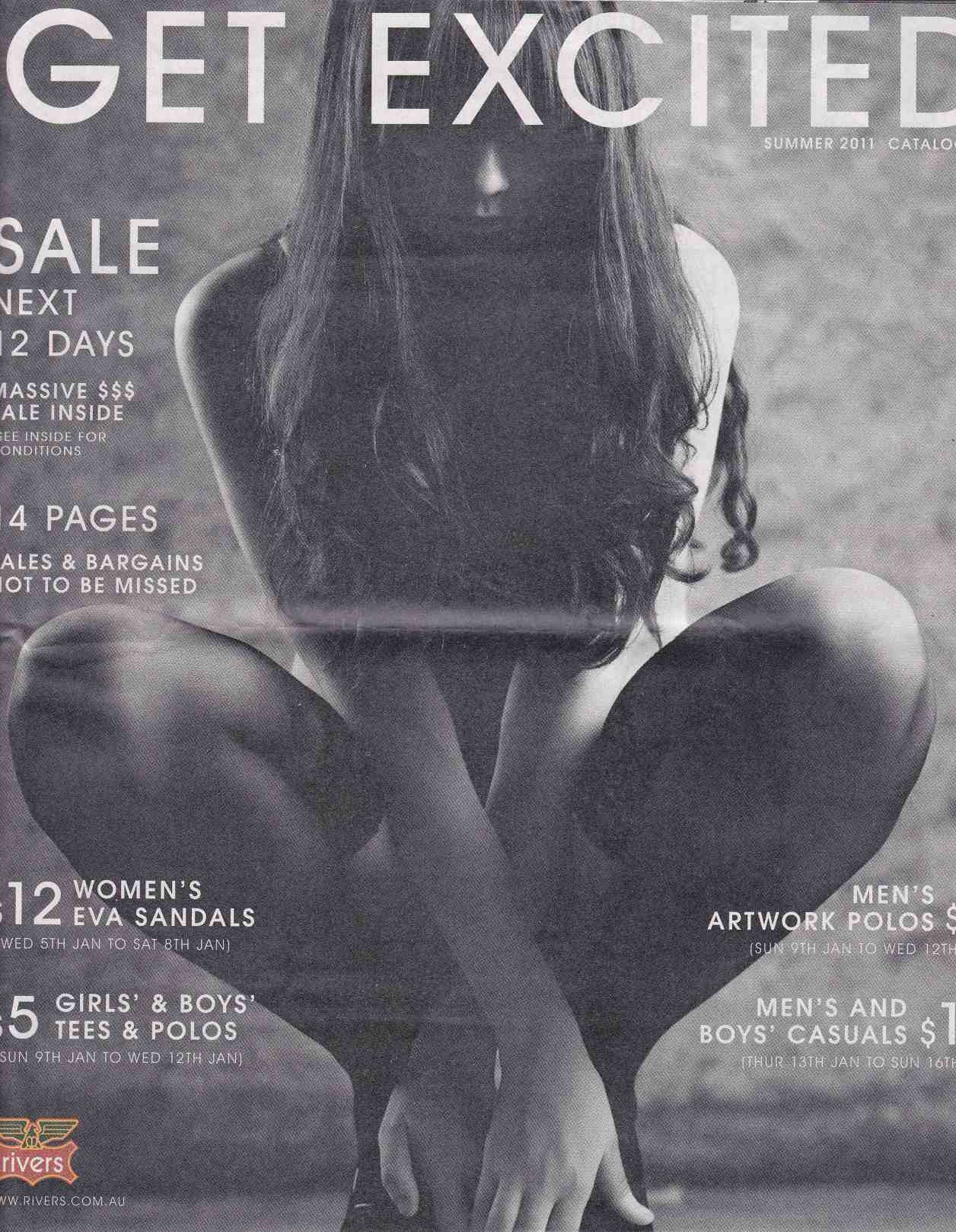 Comments we received include:

The girl's face appears to be very young.  I thought the catalogue was very inappropriate for the merchandise --cheap sandals, lots of chidrens' wear.

With the tagline of 'Get Excited' with the image it is loaded with such sexual overtones that one could mistake your catelogue for a pornographic magazine.

It objectifies women. The photo on the front is clearly sexual in intention, and is not referenced in the inside catalogue, so it is only to attract attention.  This is trading on women's sexuality and I am complaining about the trend in Rivers' advertising.

Curious, we looked at the list of determinations on the Advertising Standards Board's website to see if there have been complaints about Rivers before.

Image of a person pulling on a pair of jeans. We can only see from the upper thigh to the middle of the back. The person is not wearing a top, and we can see the top of their bottom. The words "GET EXCITED" are written in black along the line of their back.

Photograph of a female taken from the front. She is bent over with her legs apart, and her arms stretched above her so that her body shape resembles an X. She is wearing knee high black boots and black shorts. You can't see her face as she is looking at the floor and her hair is hanging down. The image is on the front cover of a Rivers Catalogue, entitled Red Hot.

This print advertisement a catalogue cover for Rivers Australia summer sizzle 12 day sale shows a woman with long blonde hair sitting on a white box with her back to the camera. She is wearing a blue, white and red striped shirt. It is pulled down on her left shoulder revealing a red bra strap. No underpants are visible and her bottom is slightly exposed. Details about the sale are on both sides of the image.

However, it is still very important to register your complaint about Rivers advertising with the Advertising Standards Board. We need to make it clear that the objectification of women is something the community cares about, regardless of the ASB's determination on the matter.

It is amazing how things that come out of necessity get adopted. We couldn’t afford models at Rivers. So I roped anyone in, including staff, my brother-in-law even my children. When we did the first catalogue we got heaps of letters and phone calls from people in advertising telling us how unprofessional we were. But we got 10 times more from customers telling us they were fantastic and how great it was to see real people modelling. - Phillip Goodman, owner of Rivers quoted in Smart Company

Exchanging regular people as models and customer praise with semi-naked objectified women is a bad idea.

Contact the Advertising Standards Board here, via their online complaints form.

As always, let us know what you write and if you get a response, via the comments below.